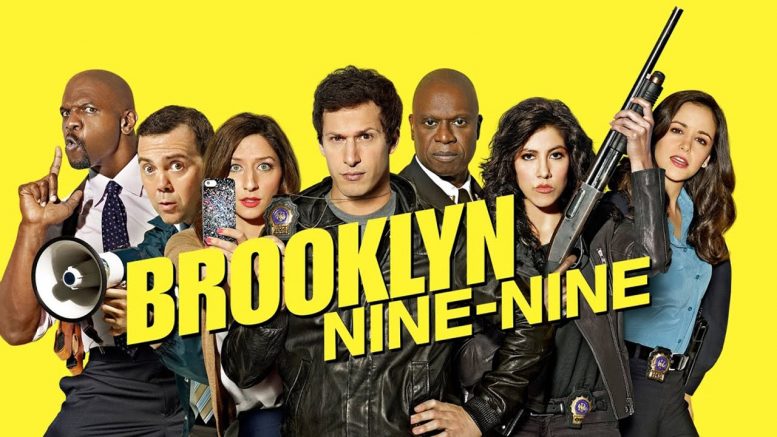 Whatever side of the Parks and Rec vs. The Office debate you choose, we can all agree that the comedic styles of those two shows have been unparalleled in television humor. That is, until Brooklyn-99. Airing on Fox (but can be also found on Hulu) at 8:30 p.m. every Tuesday night, this show is well into its fourth season as the best comedy on TV. Andy Samberg’s hilarious writing coupled with an all-star cast–of which four people are people of color and two are canonically not straight–is the recipe for a perfect, stress-free pastime. The show balances effortless humor & charisma, political commentary, and intriguing plot with little problem, making it something the whole family can enjoy!

Ok, maybe not the whole family.

But probably the whole quad.

It centers on the ninety-ninth precinct of the NYPD and follows a colorful band of characters featuring: Jake Peralta, the goofy, Die Hard-loving detective with daddy issues; Amy Santiago, Jake’s arguably more talented partner with a solid work ethic and serious respect for her superiors; Charles Boyle, the lovable sidekick with a questionable obsession with cousins, food, and Jake; Rosa Diaz, the leather jacket wearing, motorcycle riding, carries-a-knife-in-every-pocket-including-shoes detective who, despite her hard exterior, loves her 99 family; Gina Linetti, the theatrical, social media goddess who “works” as a receptionist; Terry Jeffords, the 6 foot 3 looks-like-he-could-kill-you-but-really-just-wants-a-hug man of pure muscle with a soft-spot for yogurt, his daughters, and the Skyfire series; and Captain Raymond Holt, the corgi-owning, gay police captain with a ‘thicc’ vocabulary that you never knew you needed.

The season 4’s hour long half-season finale airs on Tuesday, December 12. If you’re not caught up by then…you have all of winter break to do it. Happy watching. You’re welcome.

Julia is a senior who likes her dogs, pretending to be productive, and, occasionally, her quad.

“The Musical Comedy Murders of 1940”- What You Might Have Missed