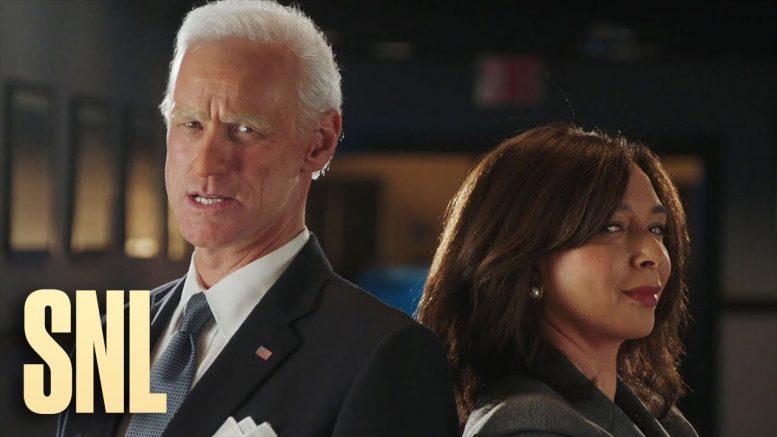 An image from the Season 46 premier teaeser || tvguide.com

The season premiere began with a memorable parody of the presidential debate starring Alec Baldwin as Donald Trump, Jim Carrey as Joe Biden, Maya Rudolph as Kamala Harris, and Beck Bennett as Chris Wallace. The Cold Open featured pitch-perfect jokes on the immaturity of both candidates and their running mates. SNL parodied Kamala Harris’s mom-like treatment of the candidates, with memorable lines like, “So why don’t the two of you finish this debate or whatever the hell this is with dignity? And when you’re done, I’ve got you boys some PB and J and apple slices waiting for you” and “Joe, let Mamala go to work.”

Chris Rock’s monologue turned out to be the perfect start of the premiere, balancing both seriousness and humor. His topics ranged from Trump contracting COVID-19 to life after the pandemic. Rock also addressed issues with the government, the presidency, and Election Day, summed up with one perfect complaint: “IT’S A TUESDAY!” The musical guest of the premiere, Megan Thee Stallion, brought an explosive performance of her hit songs and included messages of racial justice, asking for power and protection for Black men and women.

The Weekend Update by Colin Jost and Micheal Che discussed topics like Trump’s positive COVID test and the Supreme Court Justice nomination with jokes like “Everyone is wishing [Trump] well, most feel sad that their first wish came true”. They also brought in “interviews” to discuss issues like Tiktok’s buyout by an American company and a completely comedic interview with a character played by Aidy Bryant discussing the pandemic and how it affected the summer. This Weekend Update brought lots of laughs, from both the viewers and the hosts, who had a hard time keeping a straight face while discussing the current irony in today’s political landscape.

The sketches themselves were a mix of topics and bits, from the “Terrible Names” sketch to issues from the pandemic. The Ellen Show got its share of satire through a parody based on a recent talk show called “The Drew Barrymore Show”. These sketches, crude though they sometimes were, gave much-needed comic relief in these harsh times. This premiere was a great start to what will be an enjoyable 46th season.

Be the first to comment on "SNL Season 46 Premiere Review"