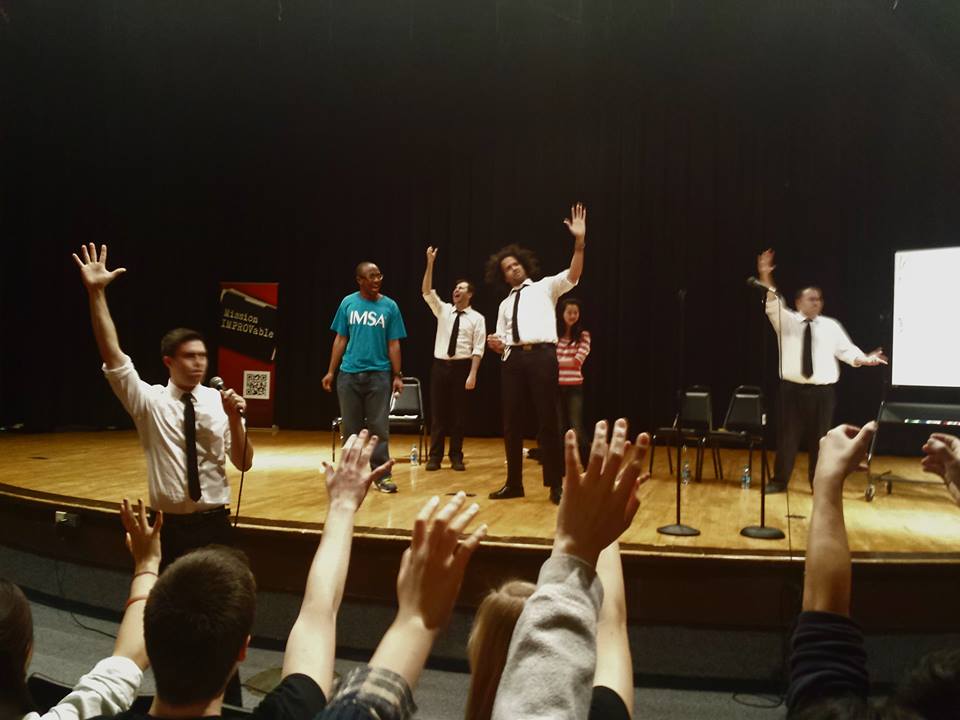 Following the agents on stage, the crowd raises their hands to the sky as though they were “tickling a giant flying baby.”

Every year CAB hosts a variety of events for students’ enjoyment.  On Thursday, January 16, they were able to book Mission IMPROVable, a highly rated improv comedy group and Campus Activities Magazine Reader’s Choice 2013 Entertainers of the Year.

Mission IMPROVable creates a show an entire show on the spot using suggestions from the audience. The group bases their show on skits from popular shows such as “Whose Line is it Anyway?” and “Wild ‘N Out.”

Before the show, some IMSA students watched videos from the group’s past performances online and said that they did not find them to be very funny.  However, during the show, the performers, or “agents” as they called themselves, brought energy to the stage that pumped up the audience and made everything funnier. It seemed that improv is a form of entertainment that is much more enjoyable when one is a part of the show. By involving the audience, Mission IMPROVable created a unique and engaging experience for the IMSA community.

Being able to shape the show and watching the actors change their behavior based upon audience recommendations  made the show  entertaining.  The show was a huge hit and hopefully CAB can continue to bring high quality entertainment to IMSA.

If you missed the show, look out for a recording on www.imsastudentproductions.com!

Be the first to comment on "Mission IMPROVable’s Improvable Success"