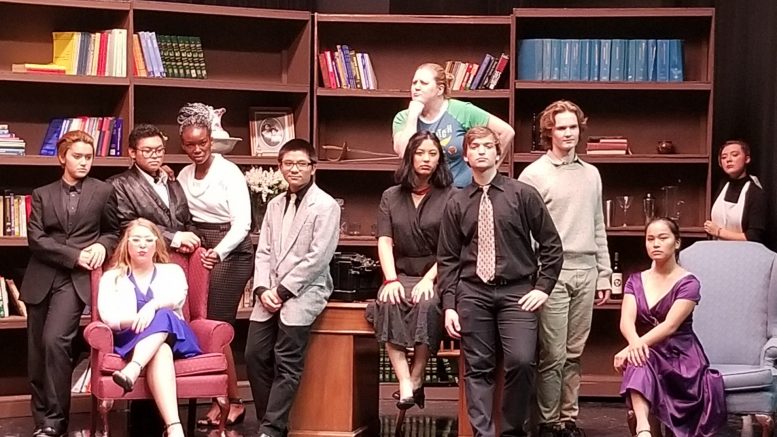 The cast of The Musical Comedy Murders of 1940. | Source: Emily Johnson

On the evening of Friday, November 1st, the mood hovered somewhere between hectic and ecstatic in the newly refurbished auditorium. It was opening night of IMSA’s fall play,  The Musical Comedy Murders of 1940 by John Bishop, directed by Julie Dowling. The cast and crew were running to and fro, placing props, fixing costumes, and getting into character, all for the big show. Actors were putting on their make-up that they had down to a science by the end of tech week, and running through lines just one more time for memory’s sake. At exactly 7:30pm, the lights came up and the show began.

The show, for those that don’t know, is about a group of actors, directors, producers, songwriters, and lyricists that have gathered at a mysterious mansion in the middle of a blizzard to lobby for funds for a new musical. But, everything goes terribly wrong when the power fails and people start disappearing. However, this isn’t the first time these people have had encounters with the macabre; the last time these particular people did a show together, three dancers were murdered by a person dubbed “The Stage Door Slasher.” This adds to the already suspenseful circumstances, as many of the characters believe this murderer has returned. But don’t be fooled by the dark side of the show — the drunkard lyricist and an awkward comic lighten the mood and fill the plot with laughs.

The cast consisted of ten students in all. Daniel Graveline was cast as Ken De La Maize, the director, and Jumobi Arwolo was cast an Elsa Von Grossenknueten, the wealthy owner of the house in which the play takes place. Wyatt Wren and Sydney Despe were cast as the play’s romantics, a struggling comedian and a graceful dancer. Sebastian Ramos and Ethan Schmidling were given the roles of two suspicious men, a New York City police officer by the name of Michael Kelly and Patrick O’Reilly and an Irish tenor with a past. Then there’s Bernice Roth and Roger Hopewell, an extravagant and outrageous, songwriting duo, played by Emily Johnson and Brandon Young. The final two characters, Helsa Wenzel and Marjorie Baverstock, were played by Kaia McDaniel, Lily Levrault, and/or Poms depending on the performance due to unforeseen circumstances. The crew consisted of ten students as well, featuring Rachel Mason, Charlotte Graves, Rachael Koterba, Ry Rollr, Willow Dennison, and Lily Levrault.