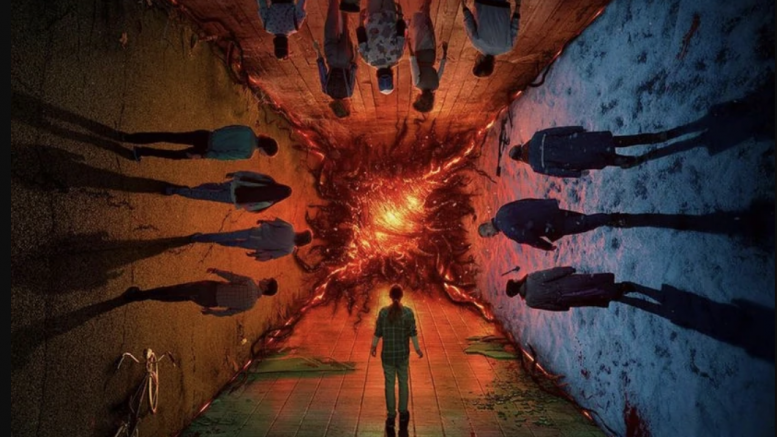 The first half of Summer 2022 began with a television bang: Netflix released the fourth season of one of the most highly anticipated shows in recent years, Stranger Things. Fans had waited for nearly three years to indulge in a new season of Netflix’s most streamed show, but was it worth the wait? Let’s delve through this season’s highs and lows to find out. Warning: There will be some spoilers.

Contrary to other seasons of the show, this season was released in two volumes. In Volume 1, the characters were divided into different scenarios: Hopper was prisoned in Russia, The Byers were adjusting to California, and the rest in Hawkins were trying to move on. Due to the various settings the characters were located in, this season consisted of three major storylines.

In Russia, the adults (Hopper, Joyce, Murray) were joined by new characters (Enzo the prison guard and Yuri the smuggler) as they tried to escape a high-security prison.

In California, Eleven attempted to regain her powers while Mike, Will, Jonathan, and Argyle, a friend of Jonathan, sought to find them, all while facing the impending danger of the government hunting her down.

Lastly, in Hawkins, the high schoolers (and Steve) face a malicious evil from the Upside Down, who also serves as the show’s main antagonist: Vecna, a former patient from Hawkins’ Lab known as 001. He was banished to the Upside Down by Eleven and now seeks to clean the world by bringing the Upside Down to Hawkins.

Regardless of the various conflicts that each storyline faces, the finale, Volume 2, remotely ties everyone together as they battle Vecna and his army.

The aftermath from the fourth season allowed for many possibilities for our heroes from Hawkins. The first volume had great execution with the mystery of Vecna’s curse, Eleven’s adjustment to high school, and Hopper’s secret message to Joyce. The new characters, Eddie and Argyle, helped by contributing lighthearted aspects to the show. Additionally, the compelling dynamics we saw and the plot twist about Vecna made the build-up to the final battle exhilarating. Many people stormed social media, discussing their theories and anticipating the unexpected. Additionally,  the iconic song from this season — “Running Up That Hill (A Deal with God)” by Kate Bush — was reaching Billboard’s most listened songs.

Viewers had to wait a month until they could finally watch the finale and witness the battle against Vecna. During this waiting period, many viewers couldn’t hold their excitement. The moment Volume 2 was released, however, many viewers were disappointed by the anticlimactic conclusion.

This season followed the same pattern viewers have witnessed throughout the entirety of the show: the death of a temporary main character. Although Eddie was a new character, he played an important role in the Hawkin’s storyline. His situation as being the first witness of Vecna’s curse made him a main character this season. However, just like Bob from Season 2 and Alexei/Billy from Season 3, Eddie dies in the finale. Viewers were disappointed by this outcome as this type of death has been happening since Season 2.

Additionally, another pattern this season followed was Nancy’s love interests. Depending on which teenage boy Nancy is teamed up with, the show makes him her implied love interest. In seasons 1–3, Nancy is paired with Jonathan, featuring romantic occurrences in each season. However, because Jonathan moved to California, Nancy is paired with her ex, Steve. Although they do not end up getting back together, the show hints at romantic tension between the two. While each character is admirable, it was disappointing to see this relationship rekindle as this love triangle was seemingly resolved in Season 3.

The thrilling and shocking build-up to the season finale of Stranger Things 4 ended with a letdown from their expected conclusions.

Be the first to comment on "Stranger Things Season 4 Review"