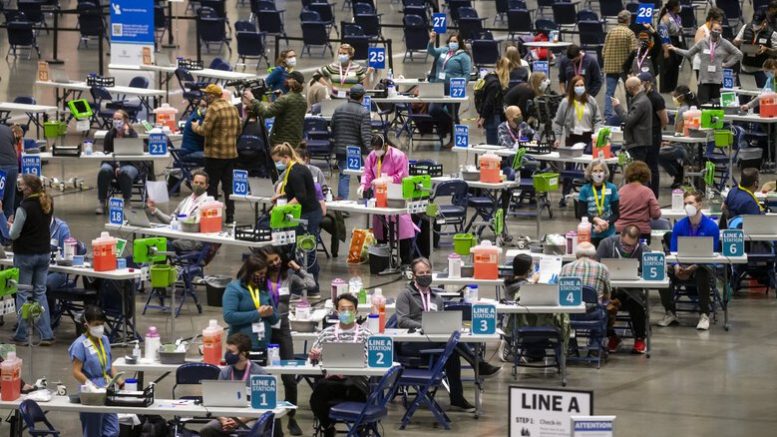 The US attempts to reach Biden's vaccination goal | Source: The Seattle Times

On May 4th, after reaching a goal of 200 million vaccinations, President Joe Biden set a new goal for the country: to vaccinate 70% of adults (with at least 1 dose) by the 4th of July. Health officials and the president’s administration declared this an important target towards reaching herd immunity, lowering cases, and further reducing Covid-related hospitalizations and deaths. At the time of the deadline, the United States failed to reach the target with only 67% of adults receiving at least one dose of a Covid-19 vaccine. However at the state level, CDC data shows that states vary in their progress towards that objective with some states exceeding this threshold and others lagging behind. This has led public health officials and government at all levels to question and analyze what was effective and ineffective across each state.

Hawaii is currently leading the United States in vaccinations with 87.6% of the adult population vaccinated, while Wyoming is lagging behind with only 55.5% of adults vaccinated.

Multiple reasons as to why vaccination numbers and rates are low in these states have been pinpointed, one of which has been lack of access for low-income people. In low-income populations, barriers such as the lack of transportation (especially in more rural areas) and the inability to take time off of work pose major hurdles. In addition, misinformation about the cost of the vaccine is still present with some concerned about the cost of the vaccine and an appointment has worried some people without insurance. However, this misinformation has been combated by the federal government. Additionally, healthcare personnel and companies administering the vaccine have taken efforts to ensure people that getting the vaccine is free.

Another large disparity is in vaccinations by age group. Data from the CDC has shown that the percentage of people in younger age groups is lower than that of people in older age groups. In the 65-74 and 75+ age groups, 92.7% and 88% respectively have received at least one dose of the Covid vaccine. While in groups aged 18-24 and 25-39, only 55.7% and 59.4% respectively have received a Covid vaccine. While a factor of this divide is the prioritization of the elderly populations during the beginning of the vaccine rollouts due to the increased risk. Another potential factor is that younger populations may feel that because the risk of death and hospitalization is lower for younger age groups, getting the Covid shot isn’t as pressing or important. In a recent survey, data shows that for adults 18-24, 23.3% feel that Covid-19 is not a threat, compared to 15.4% in the 40-54, which goes down further to 13.2% for the 65+ age groups.

Coupled with those who believe that Covid-19 is not a threat to their health, the most common reason for vaccine hesitancy is concern about the potential side effects (with 53.9% stating this). While the common side effects are fatigue, headache, muscle pain, fever and nausea, most of the unvaccinated are concerned with rare symptoms such as blood clots, which were found in extremely rare cases, and unfounded concern that the vaccine can cause infertility. While these cases are either rare or unproven, the spread of misinformation has caused many to believe these side effects are more common and are used as evidence by people against vaccinations. This concern about the side effects of the vaccine, coupled with belief that Covid-19 is not a threat, has led many to believe that getting Covid-19 is less of a risk than getting the Covid vaccine.

The final reason for vaccine hesitancy is a lack of trust in the vaccine and the government’s involvement in it. Some have been concerned with the speed of the vaccine’s development, which was the fastest vaccine to develop and get approval by the FDA. With these concerns in mind, scientists have come out saying that a factor in the vaccine’s speedy development was that it was an mRNA vaccine, which takes less time for development, and that the vaccines were still developed in a safe manner. Others are concerned with the current administration’s focus on increasing vaccination rates and encouraging vaccination efforts on all levels of government, which has contributed to a partisan divide with vaccinations with more Republicans being skeptical about the vaccination.

While these reasons for vaccine hesitancy, refusal, or inability to get the vaccine have likely contributed to the low vaccination rates in other states, numerous areas have combated this by fighting against misinformation. Many states and companies have provided incentives, such as state lotteries, with some companies securing vaccines or allowing time off for employees. Vaccine mandates from companies and some governmental agencies have recently increased due to the threat of the now dominant delta strain which has increased cases and hospitalizations, especially among the unvaccinated.

While efforts to combat vaccine hesitancy and encourage vaccinations are becoming more aggressive, the delta variant has increased Covid cases across the United States. In states where vaccination rates are low and little precautions are put in place, the delta variant has led to increased hospitalizations. This increase has caused some hospital systems to be overwhelmed. Public health officials have also shown concern for children under 12, who cannot get the vaccine yet, due to the rise in Covid cases for that age group. This increased risk of getting Covid, being hospitalized and dying has led to another increase in vaccination rates, especially in states with low percentages of vaccinations, which hopefully will begin to turn the tide of this third wave.

The Johnson and Johnson Covid-19 Vaccine

Be the first to comment on "United States Vaccination Efforts: What Went Right, What Went Wrong, and Where We Are Now"