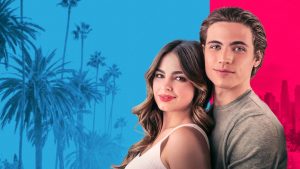 The official movie poster from He’s All That | Source: Netflix

Released in late summer 2021 as an original Netflix film, He’s All That remakes – or makes over – the 90’s romantic comedy classic, She’s All That. In the original plot of She’s All That, popular senior Zack Syler accepts a bet to turn the nerdiest girl at school, Laney Boggs, into a prom queen. In this film adaptation, the gender roles are switched with makeover influencer Padgett Sawyer accepting a bet to turn one of the biggest losers at school, Cameron Kweller, into a prom king.

As a fan of cheesy high school romantic comedies, I was intrigued to find out that She’s All That was getting a remake. Although I enjoyed watching its successor, I definitely think there were some aspects of the film that would receive major backlash.

One of the biggest issues I had was the artistic decisions made for the promotion brands featured in the movie. From the way the characters perfectly display their CORE water bottles to the way the camera focuses on the little sister buying clothes on the Old Navy website, this movie featured way too many promotional brands. I felt like I was watching a commercial sometimes. The dialogue was also extremely forced with promotions. Some of the most distinct lines would be the following: “Eating free Pizza Hut is what we’re doing!” or “Can I get some KFC to go?” The writers spent too much effort into implementing promotion deals when they should have been focusing on improving the next issue I had: the characters.

Unlike its 90s predecessor, the characters from He’s All That weren’t developed or fleshed out. By the end of the movie, the main characters hadn’t changed since the beginning. Padgett is supposed to have this revelation that she should be true to herself and towards her followers. However, all she does is say a random speech once she’s announced prom queen. We don’t see her character make monumental changes. In addition, the love interest, Cameron, doesn’t have a character-focused moment at all, not even a cheesy speech. Except for his appearance, the only change his character goes through is forgiving Padgett, the girl who treated him as nothing more than part of a bet, because his little sister cried about how Padgett changed him.

Ultimately, He’s All That is an unsatisfying return to a story concept that didn’t benefit from a retread.