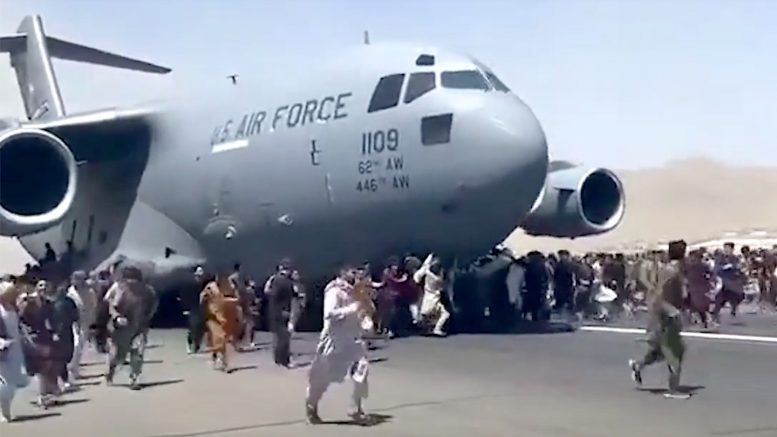 On February 29, 2020, Donald Trump signed a peace deal with the Taliban. The agreement stipulated that US troops would withdraw from Afghanistan by May 1st, 2021. Under Joe Biden, the troops’ departure was postponed, but on August 30, after nearly 20 years of fighting, the last US forces left Afghan soil.

The troops’ withdrawal marked the end of the nearly 20-year war in Afghanistan, which began in September 2001 following Al-Qaeda’s September 11th attacks. The war was the longest in US history. From 2001 until April, 2,448 US service members, 66,000 Afghan national military and police members, and 46,245 Afghan civilians were killed. Among opposing fighters, there were 51,191 fatalities.

In February of 2020, representatives of the US and the Taliban met in Doha, Qatar to sign the Agreement for Bringing Peace to Afghanistan. Under the Agreement, the Taliban would prevent “any group or individual, including Al-Qa’ida,” from using Afghanistan as a base for operations to threaten the US or its allies and continue discussions with the Afghan government. US and allied troops’ The withdrawal of US and allied troops was contingent upon Taliban action on this front.

Additionally, the Agreement called for the release of 5,000 Taliban prisoners of the Afghan government, though the latter was not involved in the Agreement. Two classified annexes were included in the Agreement as well, and it was later revealed that they undertook not to attack the troops of the US or its allies and to avoid “high-profile attacks,” such as those that would target the country’s provincial capitals, from the Taliban.

Initially, the US was to decrease the number of troops in Afghanistan from 13,000 to 8,600 by July 2020 and completely withdraw from the country by May 2021. Additional stipulations of the agreement further reduced US presence and laid a framework to support the Afghan economy thereafter.

The goal of the Agreement was an ultimate ceasefire, but such was reliant upon both sides’ compliance with the Agreement. Discussions between the Taliban and the Afghan government were scheduled to start within a month of the Agreement’s signing. However, former Afghan President Ashraf Ghani refused to release the 5,000 Taliban prisoners as required. In response, the Taliban began a series of attacks on Afghan security forces, with the US then launching an airstrike targeting Taliban territory.

On March 10, 2020, Ghani conceded to the release of 1,500 Taliban prisoners under pressure from the US; by May, the US had followed through with reducing the number of troops on Afghan soil, despite the Taliban’s further violence after the Agreement’s signing. According to a Department of Defense (DOD) report, “US officials stated the Taliban must reduce violence as a necessary condition for continued US reduction in forces and that remaining high levels of violence could jeopardize the US-Taliban agreement…Still, the United States began to reduce its forces in Afghanistan.” In August 2020, another DOD report stated that the Taliban had reneged further: “The Taliban did not appear to uphold its commitment to distance itself from terrorist organizations in Afghanistan. UN and US officials reported that the Taliban continued to support al-Qaeda, and conducted joint attacks with al-Qaeda members against Afghan National Defense and Security Forces.”

In November 2020, the Trump Administration announced that the number of US troops in Afghanistan would decrease further than was demanded by the Agreement: forces in Afghanistan would number 2,500 by January 15, 2021. On the same day, the DOD reported that negotiations between the Taliban and the Afghan government had come to a halt while violence had increased. In early December, however, the representatives agreed on a “framework to govern peace negotiations.” Still, Taliban-inflicted violence did not cease but rather continued to increase as the group sought to increase its leverage in negotiations. The DOD again called attention to the Taliban’s failure to uphold its end of the Agreement.

On January 15, 2020, as pledged, only 2,500 US troops remained in Afghanistan, marking the smallest US presence in the country since 2001. Afghan Vice President Amrullah Saleh responded by telling BBC “that trusting the Taliban without putting in a verification mechanism is going to be a fatal mistake.”

On February 3, 2021, the Afghanistan Study Group, tasked with recommending policy actions to ensure a peaceful transition in Afghanistan since December 2019, released a report counseling an alteration to the Agreement. “The most important revision is to ensure the complete withdrawal of U.S. troops is based not on an inflexible timeline but on all parties fulfilling their commitments, including the Taliban.” In March, Richard Clarke, commander of the US Special Operations Command, commented in line with the DOD and Study Group, saying, “It is clear that the Taliban have not upheld what they said they would do and reduce the violence.”

On March 25, 2021, Biden expressed during a press conference that meeting the May 1st withdrawal date may pose difficulties. He went on to acknowledge his precarious position, given the Taliban’s failure to adhere to the Agreement and his ambitions to call US troops back from Afghanistan. “The question is: How and in what circumstances do we meet that agreement that was made by President Trump to leave under a deal that looks like it’s not being able to be worked out to begin with? How is that done? But we are not staying a long time.”

On April 14, 2021, Biden declared that it was “time to end the forever war.” He announced that all troops would leave Afghanistan by September 11th. In his speech, he said he believed “endless American military force could not create or sustain a durable Afghan government.” Further, he claimed the US had achieved its goal in Afghanistan, “to ensure Afghanistan would not be used as a base from which to attack our homeland again.” Biden then confirmed his intention to adhere to the Agreement, though not precisely, stating that the final troop withdrawal would begin May 1st. Finally, Biden called attention to the 300,000 Afghans trained and equipped by the US, saying that they would “continue to fight valiantly, on behalf of the Afghans, at great cost.”

A Taliban statement followed on April 15, 2021. If US forces were not completely withdrawn by May 1st, it said, the Taliban would not be unfounded in taking “every necessary countermeasure, hence the American side [would] be responsible for all future consequences.”

Mid-May 2021, the DOD reported increases in violent Taliban activity, observing that the Taliban seemed to be working with Al-Qaeda to prepare “large-scale offensives.” On the same day as the report’s release, the US Special Representative for Afghanistan Reconciliation, Zalmay Khalilzad, claimed that an immediate Taliban takeover upon US withdrawal would be unlikely, thinking more probable a “long war” if the Taliban did pursue military victory. “Afghan security forces will fight,” he said, “other Afghans will fight, neighbors will come to support different forces.”

On June 8, 2021, Taliban spokesman Zabihullah Mujahid told Foreign Policy that the group’s objective was to institute an “Islamic government” upon the departure of foreign forces. “We will be compelled,” he said, “to continue our war to achieve our goal.” Later in the month, Trump, who had previously criticized Biden’s postponement of US withdrawal, boasted that Biden could not halt what Trump had initiated in Doha: “They couldn’t stop the process. They wanted to, but it was very tough to stop the process.” He went on to claim that if US troops stayed, they would stay for “another 21 years, then…another 50;” yet without them, the Afghan government “would not last.”

The US Withdraws, the Afghan Government Falls

By July 6, 2021, the US had withdrawn from Bagram Airfield, the largest in Afghanistan. Two days later, Biden shortened the withdrawal timeline, marking August 31st as the deadline for the departure of the last US troops.

The condensed schedule came with an acknowledgment that the Taliban was “at its strongest militarily since 2001,” though Biden told Americans a Taliban takeover of Afghanistan following US withdrawal was “not inevitable.” Later in July, Trump again made boasts at a rally, this time claiming that when he was in office, he and the Taliban “had a real understanding,” while relations between Biden and the Taliban were “going wild over there.”

On August 6, the Taliban took control of Nimroz province despite the Agreement. Nine days later, on August 15, Taliban fighters entered Kabul, the capital of Afghanistan. Ghani fled the country as US helicopters evacuated diplomats from the American embassy via helicopter. The Taliban assumed control of Afghanistan.

On August 16, Biden announced in a speech that he did “not regret [his] decision to end American’s warfighting in Afghanistan.” He deflected blame for the Afghan government’s collapse: “If anything, the developments of the past week reinforced that ending US military involvement in Afghanistan now was the right decision.”

The next day, Mujahid promised in a press conference that the Taliban’s government would be “Islamic and inclusive.” He went on to pledge that in “areas where there are embassies, there will be complete security. Therefore all foreign countries and your representatives, your embassies, your missions, international organisations, aid agencies, I would like to assure you that we will not allow anybody to do anything against you.” He added that the Taliban had “pardoned anyone, all those who had fought against [them]…We don’t want any internal enemies and external enemies.” In return, Mujahid requested that the international community “recognize international boundaries and interactions,” saying, “We have the right to act on the basis of our religious principles and rules and regulations; it’s the right of Afghans.”

On the “issue of women,” Mujahid stated that the Taliban is “committed to the rights of women within the framework of Sharia. Our sisters, our men have the same rights; they will be able to benefit from their rights.” However, he then elaborated: “They can have activities in different sectors and different areas on the basis of our rules and regulations: educational, health and other areas.” He then expressed the Taliban’s wish to revitalize Afghanistan’s economy, as well as the organization’s hope for the international community’s help in doing so.

On August 26, the Kabul airport was attacked by two suicide bombers and shooters as thousands attempted to evacuate. Nearly 200 Afghans and 13 US service members were killed. The Islamic State – Khorasan Province (ISIS-K) claimed responsibility.

On August 29, a US drone strike targeted a car driven by an aid worker. The man’s family, including children, was on board. He was wrongfully suspected of having been involved in the Kabul attack.

The last US planes departed Afghanistan on August 30, with the Americans and allies evacuated numbering upwards of 120,000.  When they did, the US’ twenty-year war in Afghanistan came to an end, the Taliban celebrated its assumption of “full independence,” and Afghanistan entered a “new era of painful uncertainty.”

Be the first to comment on "A Twenty-Year War: What’s happening in Afghanistan, from the Doha Agreement to US withdrawal"