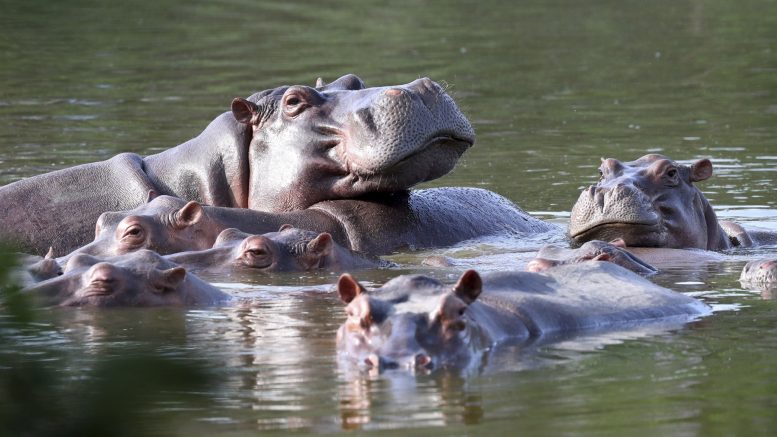 Pablo Escobar brought hippos to his private zoo, which was a part of his Hacienda Nápoles estate in Colombia, in the 1980s. It is one of the most enduring legacies of the notorious cocaine trafficker.

Escobar was shot dead in 1993. Afterward, the Colombian government took control of his estate and zoo. Most of his animals were shipped away to other zoos and enclosures, except for the hippos, as they were too heavy to move.

Now, almost two decades later, it is thought that there are almost 100 of Escobar’s hippos in Colombia. A study in the journal Biological Conservation done by researchers at Mexican and Colombian universities found that these hippos bred so successfully that they spread almost 100 miles east of their original home. They moved to the Magdalena river basin and are now considered an invasive species.

The Colombian government and many researchers are trying to find the best way to control the hippos. The government killed one of the hippos in 2009, resulting in a public outcry, which promptly cut any plans to kill the rest of the hippos. Enrique Zerda Ordóñez, a biologist at Colombia’s National University, told CNN in early 2021 that chemical castration was the only step forward, though he acknowledged that sterilizing a hippo is difficult.

Although some researchers, and the Colombian government especially, consider these hippos to be an invasive species that need to be dealt with, many disagree. Some scientists published a paper to the Proceedings of the National Academy of Sciences of the United States of America describing the benefits of non-native hippos: due to an extinction of large plant-eating animals, there’s an absence of nutrients in the soil, an alteration of plant growth, and a different water flow and availability. This paper goes into specific details about the studies they did concerning different failing ecosystems, different large herbivores that weigh over 22 pounds, and the effects on the rivers that the hippos had.

Furthermore, ecologists are arguing that these hippos aren’t causing any harm yet, therefore, there’s no reason to relocate or cull them. Many state that these hippos are a great example of rewilding, an animal that fills in for a species that humans pushed to extinction thousands of years ago. When the hippos were left behind, it started an accidental rewilding experiment that’s been running for more than 20 years. Jonathan Shurin, an ecologist with the University of California San Diego who studies these specific hippos, says that because the population is around 100, they’re a perfect example of rewilding.

“Within a couple decades, there could be thousands of them,” Shurin explains.

Shurin’s studies with Nelson Aranguren-Riaño from the Universidad Pedagógica y Technológica de Colombia in a project funded by the National Geographic Society show the difference between human-made lakes and lakes where the hippos live by looking at the ecological diversity and microbes and productivity. Shurin explained that the differences in the lakes are slight, but still shouldn’t be ignored.

“If they have a detectable impact now–when they’re relatively rare–then when they become much more common, that impact is certainly expected to increase.”

Jens-Christian Svenning, a biologist with Aarhus University in Denmark, thinks people shouldn’t be assuming the worst. A 2017 letter in the journal Perspectives in Ecology and Conservation written by Svenning and a colleague continued with the argument that these hippos are one of several species introduced to South America that would contribute to ecosystems that were negatively affected by the extinction of large herbivores. This letter uses evidence that says the hippos would funnel nutrients from land to water with their feces, that they would alter the structure of wetlands, and that they would keep grassy plants in check by eating them.

Shurin, agreeing with Svenning, says that he and his team are “planning to look at their poop to see what’s in there.”

An argument that many wildlife conservationists and supporters are using has been brought forth by Arian Wallach, an ecologist with the University of Technology in Sydney, Australia. She stressed that hippos are considered vulnerable to extinction and that a population outside of Africa is a beneficial thing.

“The fact that there are wild hippopotamuses in South America [is] a wonderful story of survival, of agency, of pioneering.”

Hippos face challenges of drought, competition, and predation on their young in Africa. In Colombia, though, they get rain year-round, fields to graze in, no hippos to compete with, and no predators, making Colombia a great place for the refugee population of hippos to live.

The ultimate question is how do we deal with these hippos? Are we to kill them? Relocate them? Let them be and hope they don’t ruin the rivers in Colombia? The answer lies in the hands of the Colombian government and the ecologists and conservationists making their case.

Be the first to comment on "Pablo Escobar’s Cocaine Hippos: An Environmental Debate"