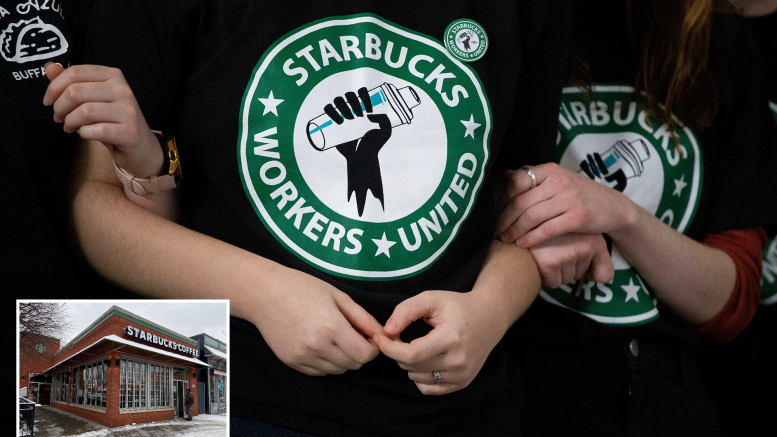 On December 9, 2021, the Labor Board certified the first union at a US Starbucks. During the vote, workers from Buffalo, New York shared their concerns on the labor injustices that were enunciated during the pandemic. This is the first time a company-owned US store will have to bargain with an organized labor union, which leads us to the question we are all asking: what does this mean for the restaurant industry, and even greater than that, what does this mean for the future of unskilled labor sects?

Reaping The Fruits of Their Labor

The idea of a union was conceived in 24-year-old Jaz Brisack’s small New York apartment. Although she does love her job as a Starbucks employee because of the amazing people she’s met, the minuscule pay and lack of benefits, when compared to 10 years ago, was enough motive to radically change how labor is discussed in Starbucks. Even more so, the conditions of labor during the pandemic were life-threatening, and they still weren’t paid an amount that is livable in society.

Senator Bernie Sanders said in a live stream showing support for the movement, “[this generation] has really struggled economically, and of no fault of their own, now have a lower standard of living than their parents.” While Starbucks was announcing record-breaking Q4 FY21 earnings results, their workers continued to work in a dangerous climate and continued to not reap the fruit of their labor.

The unionization of Starbucks was not out of the blue. Buffalo, New York a seemingly unlikely place for the first union of the biggest coffee chain in the world, was home to a previous chain coffee union. Aided by the sudden shift in the value of labor workers during the pandemic, it set the perfect scene for workers to advocate for a “seat at the table.”

Although some Starbucks workers believe that Starbucks is not doing enough, some think otherwise. The Starbucks website lists the employee benefits they give to its workers such as discounts on apple products, healthcare coverage, 100% tuition coverages for some schools, parental leave, commuter benefits, paid time off, 401(k), and many more. Starbucks offers an amplitude of benefits, and when compared to many other fast-food chains, there are benefits to working with Starbucks that can make up for the low pay.

Some Starbucks employees event felt that the union members were ungrateful for the employee benefits. Because of the attacks on the founders of the union, they were met with a psychological weight from Starbucks which was continued when managers came to try to persuade them to disband the union. Brisack spoke out about this in an interview by ABC news, and Starbucks responded with, “These claims are grossly inaccurate. We did not and do not engage in intimidation tactics.” The union founders have agreed that Starbucks is a great place to work that gives its employees opportunities to outgrow it, but the mission of this union is to have a say in the fruit of their labors.

A Surge in Unionization

The December 9th vote marks the first time in Starbucks history that a union was formed. Seemingly, this unionization appears to only affect Starbucks, but this unionization can act as a catalyst for fighting for labor rights in fast food restaurants. In recent years, the amount of US workers who are union members has 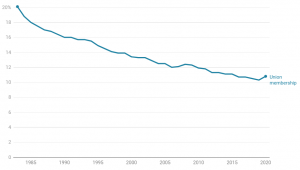 A chart showing the decline in company Union membership in the last 35 years. Source: vox

dropped in the last 25 years. This recent effort for a union has revitalized the people who are a part of unions, with recent data showing a record high since 1965 of the people who approve of unions. Since Starbucks’ unionization, three more stores in Buffalo have filed for unionization. Starbucks unionization has extended far past a labor union for stores but has opened doors for unskilled labor sectors, like leisure and hospitality to fight for a say in their labor.

Aided by the value of labor in the pandemic and the increase in public activism in labor, a vote to unionize Starbucks succeeded on December 9, 2021. The employees that were once disposable to the larger corporation of Starbucks now have a voice in matters involving their labor. In lieu, other corporations are motivated by the change they can make even as employees which can cause a shift in how labor is managed in the near future.