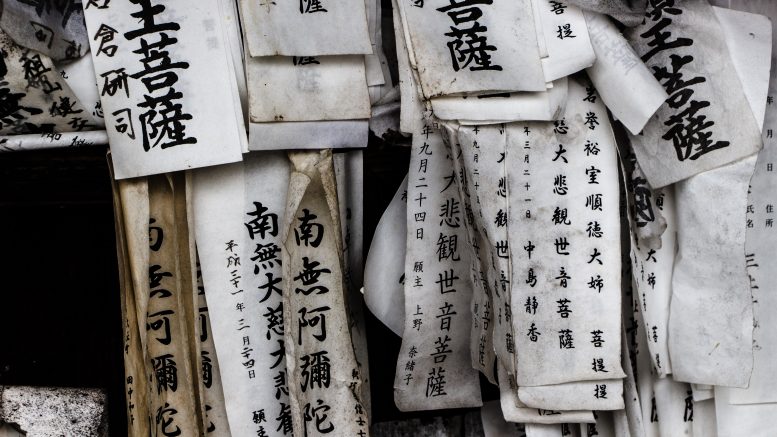 The logographic nature of the Chinese written language creates unique situations in which the visual aspect of a word and its meaning is not necessarily attached to its spoken pronunciation.

With the way the Chinese writing system works, it is impossible to write a character that isn’t a word with its own definition, unlike how writing separate syllables or letters in English will not produce any meaning. This characteristic is utilized in the well-known Chinese loanword for Coca-Cola, lauded for both sounding like the original name (“Kĕkŏu Kĕlè”) and cleverly having a positive meaning (“tasty and fun”). However, beyond the quirky playfulness for which the visual and verbal elements of the Chinese language are used lies a different historical use.

The language consists of characters that represent monosyllabic words or morphemes. Common types of Chinese characters include pictographs (the character is a “drawing” that resembles its meaning), ideographs (the character represents concepts), phonetic loans (loanwords constructed from syllables), and phonetic compounds (one part of the character indicating pronunciation and another part indicating meaning). Semantic radicals are a unique part of the writing system, in which one or more parts can show up repeatedly in several words to indicate their meaning or connotation (similar to prefixes and suffixes represented graphically). For example, the person radical 亻derived from 人 (person) is used in words such as “me,” “he/him,” and other characters related to people and humans. Another example is the hand radical 扌derived from 手 (hand), which is used in words such as push, pull, and so on.

With Chinese characters having both verbal and visual aspects contributing to their definitions, there existed a unique phenomenon of graphically pejorative ethnic slurs used for both Sinitic and non-Sinitic peoples throughout history. Graphic pejoratives in written Chinese count on the meaning of the written character used, rather than its pronunciation, for the purpose of referring to other ethnic groups in degrading ways. For example, the name for Yao people (in southwest China and Vietnam), had a demeaning character 猺 meaning “jackal,” but 20th-century linguistic reforms replaced the character with 瑶, meaning “precious jade,” while retaining the pronunciation of “yáo.” This differs from other languages such as English, in which a word (and slurs) can be used for the same meaning across multiple spellings, as long as the pronunciation is mostly retained.

In this usage of the graphic aspect of written Chinese, semantic radicals come into play significantly. As seen with the original character for “yáo,” 猺 uses the beast radical 犭derived from 犬 (dog), which is found in numerous words for and relating to animals such as cat and pig. Thus, with the substitution of the radical that gave the character its derogatory nature, the meaning of “yáo” was changed. In many other instances, words with the beast radical and other radicals meaning sheep, insect, or reptile have been used for their visually insulting meanings.

Such debasement of specific languages and cultures can lead to damaging psychological conditioning in which ethnic groups may take offense not to a verbal referral, but the characters written to refer to them. For example, people of Fujian and Taiwan will identify themselves as originating from Min, but refuse to acknowledge the character for it, 閩, which includes an insect radical. Additionally, around 100 C.E., the words 蠻南儂, used for peoples in Southeastern Yue (Vietnam) included a snake radical and a character meaning “barbarian,” but are now written as 閩南人, taking out the “barbarian” meaning.

The transformation of graphic pejoratives throughout history is significant for representing the stains of past cultural perceptions between ethnic groups. It establishes linguistics as a unique area of study to examine historical perspectives. While some of these pejoratives have been replaced with more honoring characters, others, along with their derogatory history, have been enshrined in modern-day dictionaries of sinographs. The effects of such a phenomenon reflect the influence of past intercultural relations that extend to today.

Be the first to comment on "History Told Through Linguistics: Graphic Pejoratives in Written Chinese"