At the 2021–2022 IHSA Chess Sectional Tournament on Saturday, January 29th, a conflict arose between the chess teams of IMSA and South Elgin.

In the beginning, the two teams had little to no interaction, as Titan chess player Miles Massey (‘23) recalled, “We didn’t play them, we just saw them walking around the lobby.”

After the tournament, though, the real battle started. Garnering a perfect score, the Titans took home the win and the coveted prize. South Elgin, who tied for second place, then “tried to buy the plaque off [Titan co-captain] Rohit Kartha (22) for $150.”

Being denied the plaque and salty about their loss, South Elgin then called the Titans “nerds with absolutely zero swagger” in the caption of an Instagram post.

Admittedly, Titans are nerds, but IMSA students were taken aback by this brutal honesty. In response to this allegation, Miles Massey (‘23) retaliated in a career-ending clap back, “Everyone knows IMSA has so much swagger.”

To prove their swagger and support their chess team, the IMSA community fired away comebacks in the comments section, with South Elgin’s community reciprocating their sentiments:

IMSA could finally get some funding if they mined the salt from this team. 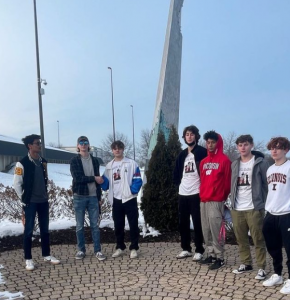 Despite retaliations left and right between IMSA and South Elgin, these enemies were able to reconcile, and a true enemies-to-lovers story flourished. The South Elgin team asked the Titans to get together, and the Titans welcomed them to their campus. They visited IMSA for a tour, and peace between the two teams was restored.

But will these newly reconciled teams remain at peace during the 2022 IHSA Chess State Finals? South Elgin claimed on Instagram that their “team plans to cause absolute havoc” at State. Meanwhile, the Titans are hungry for a win to reinstate their swagger, as Miles Massey (‘23) declares that “The only way to regain your swagger is to win first at State.”

Will the budding friendship between the two schools hold strong? Will the Titans regain their swagger? We await to see how this relationship continues to unfold.

Camaraderie and Success of the Girl’s Basketball Team

Be the first to comment on "“Absolutely Zero Swagger”: The Great Chess Clash"