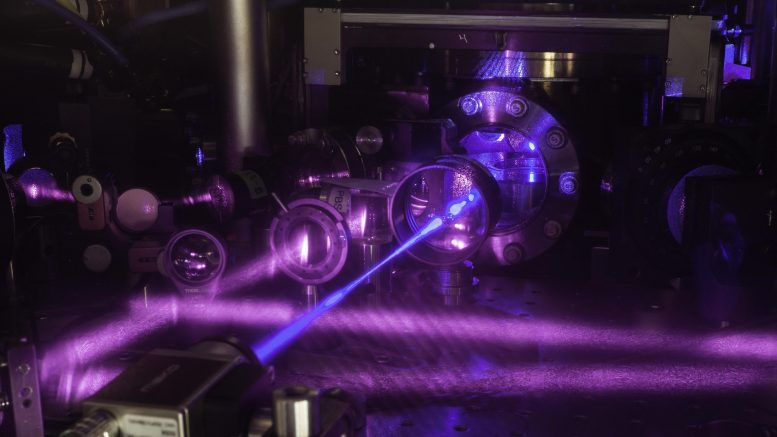 Physicists from JILA, a research institute cofounded by the National Institute of Standards and Technology (NIST) and the University of Colorado Boulder, have reported developments in the use of ultracold strontium (Sr) atoms for optical lattice clocks (OLCs). By using clouds of these neutral atoms spaced a centimeter apart, along with a system of oppositely propagating lasers (dubbed an optical lattice), Zheng et al. have reported that their Sr-OLC holds atom-atom coherence times of 26 seconds as opposed to an atom-laser coherence time of 96 milliseconds while reaching a reproducible precision at the 10-18 seconds instability level. These results suggest major implications in field applications of OLCs, reducing the dependence of instabilities on the quality of the local oscillator. 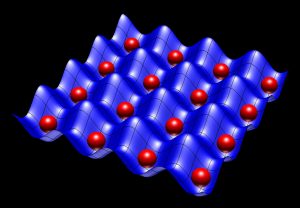 Optical lattices are formed through the perpendicular projection of interfering oscillation patterns from multiple electromagnetic wave sources. These sources, when arranged into a grid, can be used to trap atoms using principles of electron-photon emission and absorption | Source: NIST

As atomic physicists improved their ability to manipulate these systems, the practice of laser cooling the atoms to temperatures near absolute zero has become common practice. By using the property of momentum changes in photon-atom, whether emission or absorption, interactions to homogenize the velocities (compressing the velocity distribution) of the particles, the temperature can be decreased immensely.

Laser cooling and trapping techniques have yielded dramatic increases in the accuracy of modern atomic clocks. Simultaneously, attempts at increasing the frequency and narrowing the intrinsic linewidths of the electronic transition have resulted in greater reproducible precision (usually measured in 10–x seconds, with an increase in significant figures implying greater precision). For example, the International Atomic Time (TAI) uses an average of global synchronized atomic clocks to a precision of 10-16 seconds. Similarly, the Coordinated Universal Time (UTC) uses the information derived from TAI and pairs it with data of leap seconds from variations in the Earth’s rotation, yielding a more accurate global time standard.

A subset of atomic clocks, optical lattice clocks’ means of time-keeping are largely the same, with a few distinguishing characteristics in the formation of the lasers used. As the name suggests, an OLC traps a relatively large collection of neutral atoms in the interference patterns formed by a grid of oppositely propagating electromagnetic waves (known as an optical lattice). Subsequently, the atoms are exposed to a heavily tuned and stabilized frequency laser that serves the purpose of measuring the electronic transitions.

The JILA team sought to not only develop an OLC that holds accuracy to a high degree of precision but also to improve the atom-atom coherence times (essentially, a measure of how stable of a frequency the transitions are occurring) to such a magnitude, that the quality of the laser used for local oscillation decreases. The clock laser used was at 698 nm and had an intrinsic linewidth of ~1 Hz and linear drift rate of ~1 Hz s-1, values marginally worse than prior industry-leading experiments yielding instabilities at 10-19 seconds. The ultraprecise functionality of the optical lattice and strontium cloud trapping used by Zheng et al. resulted in instabilities only a single order of magnitude lower than these past experiments. These results suggest major eases on laser precision requirements previously set, allowing for field applications of OLCs to become more realistic and cost-effective. 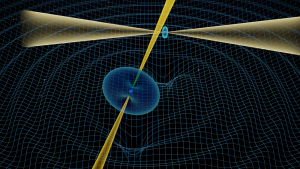 Researchers from the Commonwealth Scientific and Industrial Research Organization (CSIRO) found that a system of double pulsars interacting with one another yields the same gravitational constant behavior predicted by Einstein’s General Relativity | Source: Max Planck Institute

Ultraprecise time-keeping from OLCs developed at JILA, as well as other facilities produced by NIST or Department of Energy (DOE) laboratories, have implications in a variety of research fields. Of these, some major use-cases include:

Be the first to comment on "Measuring Resonances: JILA Optical Lattice Clock"