This is IMSA's 30th year of the SIR Program. Source: DigitalCommons/IMSA

Kathryn Downey (’18) and Spoorthi Jakka’s (’18) SIR project is advised by Dr. Brian Nord, who is an Associate Scientist at Fermilab and a Visiting Research Assistant Professor at the University of Chicago. Their project focuses on using a Python program to identify circles and therefore locate distant galaxies and reveal information about their interactions with dark matter and energy.

Although galaxies aren’t shaped like circles, optical effects, known as Einstein rings, are. As explained by Downey, “Einstein rings occur when the light from a distant galaxy is bent by the gravitational field of a galaxy in front of it. This effect, called gravitational lensing, distorts the image of the distant galaxy so that it looks like a blue ring.” These are the rings that the program they are developing is meant to detect.

Downey says that developing this program using the Hough Transform, the “artificial intelligence algorithm that identifies circles,” has taken the entirety of the SIR this year. At the start, they had successfully applied the program to simulated images of circles and polygons. However, when they moved on to using the algorithm on previously identified Einstein Rings, Downey says that it “did identify the Einstein ring in some cases, but the use of different image or input parameters would cause the transform to misidentify the ring.”

From this, they have been using three approaches to prevent further mishaps. The first is testing which parameters are the most successful, the second is removing smaller circles that aren’t in the center of Einstein rings as to not confuse the program, and the third is to split images into color components so they only focus on the blue rings. 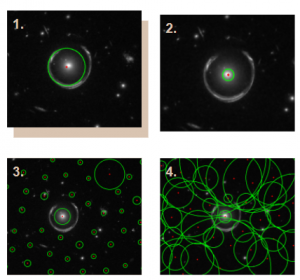 “We have created an algorithm that removes small circles that are not centered on the Einstein ring (many of these circles are seen in figure three on the right).”

Тhis sounds like a lot, but given most of an I-day to work, Downey says that they spend it “writing, debugging, and researching code to implement to [the] algorithm” and thus have accomplished a lot this past year. Both agreed that their biggest achievement was when they ran their program on an image, and it “identified a circle directly on top of the Einstein ring.” After this, they were able to keep adding on and improving the program, but this first success told them that their program was on its way to being functional.

Additionally, they both agreed that getting to travel to and work at Fermilab was a very rewarding experience. “Our project doesn’t involve a lot of lab work so it would have probably even been possible to complete most of it remotely,” stated Jakka. “But travelling to Fermilab each week is definitely a more rewarding experience.”

Downey added that it also gave them more independence, as their adviser was very busy and would usually only stop by a few times a day to check on their progress. Instead of having someone guide them through the process and teach them everything, they had to figure out a lot of it themselves, which helped them to learn better and feel more rewarded when the program worked.

Overall, both Downey and Jakka agreed that they learned a lot from their experience with this SIR. Downey said that SIR had given her experience in running her own research project, which she hopes to do more of as she pursues a career in physics.

Be the first to comment on "Projects of IMSAloquium: The Applications of Artificial Intelligence in Astrophysics"