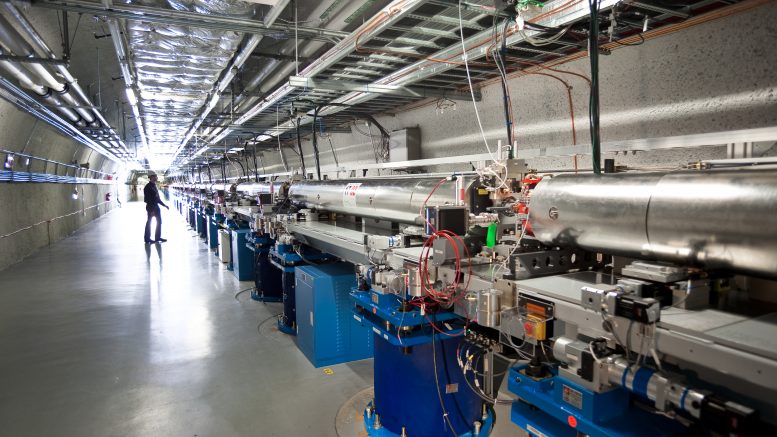 In late 2021, a proposal for a 10Hz petawatt laser addition to SLAC National Accelerator Laboratory’s Linac Coherent Light Source (LCLS) was approved for construction by the Department of Energy (DoE). Working alongside the existing X-ray free-electron laser (XFEL), the new design proposes major high-energy advancements in LCLS’s analysis of matter in extreme conditions. Partnering with Lawrence Livermore National Laboratory (LLNL)’s Advanced Photon Technologies (APL) for the addition to the Matter in Extreme Conditions (MEC) facility, SLAC hopes to use the petawatt upgrade to make major advancements in fields such as nuclear fusion energy research, plasma physics, and high-energy-density (HED) physics.

Since the initial pulses of X-rays were fired from LCLS in 2009, SLAC has made enormous breakthroughs across various scientific disciplines. As one of the only two operating lasers able to produce high-energy (often dubbed “hard”) X-rays, the LCLS’s laser production is designed in a series of steps starting from a section of SLAC’s linear accelerator facility.

In the linear accelerator, pulses of ultraviolet (UV) light are directed onto the surface of a copper plate, making use of the photoelectric effect. The introduction of a short-wavelength electromagnetic UV wave with a high electrical conductivity like copper (Cu) causes interaction between the high-energy photons and the Cu atom’s electrons. Through a series of absorption and radiation between the electrons and the newly introduced photons, the rapid energy level changes and oscillations cause electrons from the copper plate to be displaced. These displaced electrons, dubbed free-electrons, are then directed through the beampipe into the LCLS Undulator Hall.

The Lorentz force equation dictates the combined relationship between the electric (E) and magnetic fields (B) (into an electromagnetic field), and the resultant force (F). The equation assumes a particle of charge q moving at a velocity of v. Note that the force from the magnetic vector field arises through a cross product with vector v, yielding a force orthogonal to the direction of the particle| Typesetting: Dheeran Wiggins | Source: CERN

Within the Undulator Hall are thousands of ultraprecise magnets arranged within millimeters of one another, each with their magnetic poles alternating. When the clusters of electrons from the accelerator travel through the magnetic fields, they oscillate through the fields rapidly in opposite directions along the direction orthogonal to their path (as dictated by the Lorentz force, which can be motivated, though not directly derived, from Maxwell’s equations). As a result of the rapid oscillation and the consequent electromagnetic interactions between the electron clusters, X-rays are produced in a narrow line along the path of the beam. Eventually, the clusters and their associated X-rays begin to align into parallel sheets. Because of the resulting interference from this formation, the crests and troughs line up and the X-rays form into an extremely narrow, highly-powered, and coordinated laser beam, known as a “coherent” laser. These coherent laser pulses are then branched off and directed to a plethora of experimental facilities, such as the MEC, within SLAC.

The petawatt laser, the most powerful laser type on the planet, generates power to the degree of 1015 watts (for reference, that is a million billion watts) and can be used to mimic the most extreme conditions for analyzing the behavior of matter in processes such as nuclear fusion. As a result, these lasers can prove to be incredibly insightful when exploring material interactions in conditions comparable to the surface of the Sun. However, because of the immense power and financial necessities, along with DoE regulations on petawatt laser production, experimental petawatt facilities usually do not have the ultraprecise tools necessary to properly analyze the high-energy-density materials.

The Matter in Extreme Conditions facility along the LCLS beam at SLAC uses the highly-precise X-ray pulses of the XEFL to analyze subatomic material behavior in extremely hot and dense conditions. | Source: SLAC National Accelerator Laboratory

Consequently, the majority of prior use-cases have been in areas of physics such as pure particle accelerator scattering experiments (to generate the kinetic energy necessary to produce collisions).

The DoE-approved renovations for the LCLS MEC-U (upgrade) would allow for the ultraprecise measurements and imaging of the onsite XEFL technology to be used in concordance with the new high-power laser, yielding the most historically accurate material analysis of extreme condition events. The XEFL, a high-energy kilojoule laser, will be built alongside the new high-power petawatt laser in a newly cleared underground cavern, forming a new branch off of the main LCLS beam.

Applications of the LCLS and MEC-U

Ultraprecise lasers at national laboratories such as SLAC’s LCLS—Argonne’s Advanced Photon Source, NIST, and FNAL—have been used for investigations into subjects spanning physics, as well as many other scientific disciplines. The unrivaled measurement capabilities of these lasers continuously prove to be useful in testing particle-physics, astrophysics, biological, and geological theories. Some examples of these use cases have included:

These applications allow for an overall increase in the ability of experimental physics to verify and track results in specialized fields across the scientific community. The high-power petawatt laser upgrade at SLAC will allow for previously unverifiable theories and unexplainable phenomena, to be analyzed and recorded, furthering the frontier of science as a whole.

Be the first to comment on "SLAC: Petawatt Laser Facility Addition"