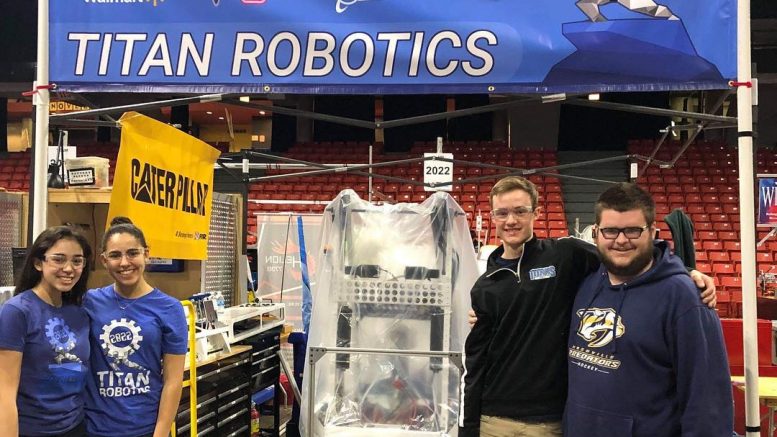 Titan Robotics, IMSA’s FRC Robotics Team, had a successful year competing in the FIRST Robotics Competition (FRC) and other off-season competitions which work to teach their members “technical skills, such as mechanical programming, electrical, and computer aided design (CAD), as well as soft skills involving business, leadership, and communication.”

What is the FIRST Robotics Competition?

Titan Robotics is an FRC Team that has its application season begin when Titan Robotics veteran members reapply for the team in the summer and rookies apply at the start of the school year. Upon acceptance, members begin preparing for the competition as soon as school starts.

Gray Pacourek, Head of the Design and Integration Team, describes FRC as a “robotics competition in which students build a robot in a six-week period to compete against other teams to perform a series of tasks. Our team has a senior and junior captain who manage the team and the different subteams that make it up.”

Pacourek adds that within the FRC there are subteams, which “include the Mechanical, Electrical, Programming, Design and Integration, Software, and Business teams. The teams work together to coordinate the design, construction, and programming of the robot.”

Here is a breakdown of the subteams:

FRC Robotics Team Intersession goes toward preparations for the FRC competition in March. Intersession is time to work “with Robotics Team prototypes and build the robot, so it is essential to be in-person,” Kevin Lemus, an FRC team member, continues, “Online Intersession hindered our progress because all we could do was CAD the robot or talk about the game.” In comparison, he shares that “in person Intersession is entirely used to work on the robot in the lab. Being virtual made us fall back a couple weeks.”

Alongside Intersession being a time dedicated toward preparation for FRC, Titan Robotics also attended two in-person events held by Gear It Forward throughout the season. The first event was held on January 8, 2022, which is around Intersession and the start of the build season. Pacourek shares that “[the team] saw the game reveal and brainstormed ideas.”

The second event, referred to as “Week Zero” because it is the week leading up to the start of competitions, was held on February 19, 2022. In this week of preparation, “most teams already had assembled robots and were able to show off what they had and compare ideas with other teams” Pacourek says.

Titan Robotics competed in two major regionals: Iowa regionals and Midwest Regionals in Chicago. The Titan Robotics board and its mentor, Grant Bell, manage the planning of the members signing up for regionals.

The FRC Iowa Regional brought “together more than 40 teams from the Midwest to compete in the University of Northern Iowa McLeod Center.”

As for the outcome of the Iowa regionals, Pacourek relays that “The Iowa Regional did not go very well for [the team]. We ran into lots of issues that prevented our robot from working to the best of its abilities and, in the end, we were not picked during alliance selection [which is a draft where the top eight seeds pick two teams to join them in playoffs]. There were no real ups for that competition as it was overall a very disappointing event.”

Regardless of Titan Robotics not making playoffs due to complications with their intake and shooter, they put in their best efforts and that in itself is impressive work.

The FRC Midwest Regional is “an international, intense three-day event showcasing robots developed and operated by teams of high school students.” This year, the competition took place from April 6th–9th in Chicago.

From all of Friday through Saturday morning, a series of Qualifying Round matches were played between randomly selected teams to decide the top eight individual teams. After, those top eight teams would select two other teams that they would like to have join them in forming an alliance for the Playoff Matches.

On Saturday afternoon, the eight alliances compete in the Quarterfinal Matches and only four alliances move onto the Semi-Final Matches. After, two alliances will face off in the Finals for the title of Midwest Regional Champion.

While the Iowa regional may have not gone as expected for Titan Robotics, Pacourek shares that “The Midwest Regional went much better than the Iowa Regional. Our robot was modified heavily in between competitions in order to fix the many issues we ran into.

Another Robotics competition IMSA students dedicate their time toward is the First Tech Challenge (FTC).

Pacourek describes FTC as “a smaller competition that builds smaller robots but apart from that the overall structure is pretty similar.”

On March 1, 2022, the FIRST Tech Challenge (FTC) Robotics Team TITANS advanced to the state tournament on March 12th. They placed 3rd overall out of 25 teams. Then, on March 5th at the IL FTC-Southern/Central/Western League Tournament, TITANS were winners for the Think Award and 2nd place for the Inspire Award.

The 2022 FRC competition was a transportation-themed competition, called Rapid React. Its focus was on the UN SDG Goal #9 (industry, innovation, and infrastructure). This year’s game consisted of the teams working towards shooting cargo into hubs. The game’s points system was that a shot in the upper hub garnered two points and one in the lower hub earned one point. An in-depth video that explains the 2022 FRC Robotics Competition Rapid React can be found here.

Teams are grouped into two different competing groups, one of red alliance and the other of blue alliance. Both teams are tasked with processing cargo for transportation.

Here is a timeline of the competition:

Last year, being only a virtual experience, hindered this year’s Titan Robotics’ performance. Lemus shares that last year was primarily focused on training, and Pacourek says that “One of the biggest problems we had this year was the lack of experience due to not having a real season last year. Because IMSA students only stay here for 3 years, the only people who had experienced at least part of an FRC season were the current seniors.

“So when it came time to work on the robot, we were the only ones who knew what we were doing. This forced us to rely on the seniors and caused us to run into a lot of problems we probably should have known about.”

Although last year left Titan Robotics in a tough situation for this year, Lemus states that, “This year was a lot more fun. . . . Also, the competition was a lot different. [Last year] was like designing a game instead of actually competing a game.” He adds that this year he spent his time “learning how to use CAD, solid works, and how to do things.”

As for Pacourek’s experience, he shares a highlight of this year in Titan Robotics for him was that “This year is much much better than last year. Because we were virtual last year we didn’t have access to the lab so were not able to actually compete or build a robot. This year we had full access to the lab and were able to function like a normal year. This allowed us to build a full robot and progress through the entire season, allowing everyone to get the full FRC experience.”

Titan Robotics have dedicated immeasurable hours toward making great improvements, and now that the virtual era has passed, Titan Robotics is free to go forth full steam ahead!

Techniques for Sleeping in Class

BREAKING NEWS: INTERSESSION IS BACK!

Be the first to comment on "Recovering From the Virtual Era: A Summary of IMSA Robotics’ Season"