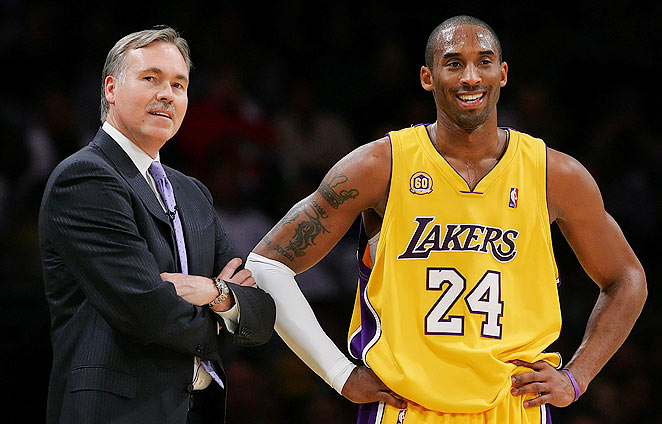 The Los Angeles Lakers have long been the NBA’s most renowned franchise. Generation after generation, the Lakers are infused with a new combination of talented, highly-reputed players. In the 1960 and early 1970s, consistent trips to the NBA Finals were the norm thanks to the dynamic trio of Jerry West, Elgin Baylor, and Wilt Chamberlin. After a short period of mediocrity, the Lakers acquired the revolutionarily stylistic Kareem Abdul-Jabbar, later coupling him with the man synonymous with showmanship, Magic Johnson. Together, and with the help of “Big Game” James Worthy, the 1980’s Lakers tacked on an additional five championships to the franchise’s collection. Again, the team struggled through a few mediocre seasons before reloading their star power. During the late 1990s, the Lakers signed the behemoth known as Shaquille O’Neal and paired him with a young Kobe Bryant. Despite the frequent power struggle, the overwhelming duo led the Lakers to three straight NBA championships. Continuing on with the trend, the Lakers sank back into temporary mediocrity as Kobe Bryant flourished individually. Eventually, Pau Gasol, a proficient, collaborative post player, joined the team and helped Bryant on the journey for two more NBA championships.

With a couple subsequent years of early elimination from the playoffs, the organization became impatient. This past offseason, the Lakers acquired the disgruntled, imposing Dwight Howard along with one of the best passers of all time, Steve Nash. Unsurprisingly, the expectations for such a refined all-star team elevated to new heights. In fact, the hype for the team pervasively affected the players themselves, as evident by Metta World Peace stating that the Lakers, “definitely want to beat the Bulls’ record and go 73-9.” Oddly enough, World Peace’s statement was entirely irrelevant to the reporter’s question, which asked for the effect that Dwight Howard’s absence from training camp would have on the team. In hindsight, simply making the playoffs would have been a more suitable goal for this Lakers team. After all, after 43 games, the Lakers sport an embarrassing record of 18 wins and 25 losses, good enough for 10th place in the Western Conference and no spot in the playoffs.

So, such poor results lead to an obvious question: what has gone wrong? While a multitude of factors have contributed to the Lakers’ woes, ultimately, the main inhibitor has been their coach, Mike D’Antoni. Despite his team’s tendencies, D’Antoni insists on running a fast-paced, up and down system, that encourages three point shooting and typically results in unreliable defense. While such a system may work under certain circumstances, Coach D’Antoni has failed to recognize the Lakers’ inherent personnel flaws that make them and his system simply incompatible. To begin, four out the five Lakers starters are above the age of 32 and as a result their athleticism is diminishing. While Nash and Kobe Bryant are offensively capable of running D’Antoni’s system, their pathetic defensive efforts allow for other teams to take advantage of the plentiful transition opportunities that are a consequence of this play style. Additionally, Metta World Peace, previously renowned for his physical defense, has now been relegated to jacking up ill-advised, distant shots, thus mitigating his ability to succeed on the defensive end. Perhaps the most underwhelming performance thus far has come from Pau Gasol, whose fantastic low post offense and passing abilities are being wasted. Instead of playing to his strength, Gasol has been the odd man out. As a result, his offensive opportunities mainly come in the form of long-range, inefficient jump shots. Gasol’s frontcourt partner and 3x Defensive Player of the Year, Dwight Howard, was expected to make up for his teammates’ deficiencies on defense. Instead, he has been an enigmatic, polarizing presence who has frequently expressed issues with his lack of opportunities on the offensive end. As Howard’s game does not revolve around shooting and quick possessions, he has been relatively ineffective in D’Antoni’s system. Furthermore, Howard is recovering from a difficult back injury, so expecting him to carry the load defensively while transforming his offensive game is simply unrealistic.

Collectively, the Lakers do not have compatible players. There is a lack of athleticism, defense, long range shooting, and effective bench players, all of which are essential to NBA success. Rather than having a coach that can mask the aforementioned weaknesses, the Lakers must follow Mike D’Antoni, who does nothing but emphasize the team’s shortcomings. This season is undoubtedly a failure as even qualifying for the playoffs is unlikely. So, it is safe to assume that this version of the Lakers reloading does not compare to past attempts. The surely ephemeral experiment has provided many laughs, though.