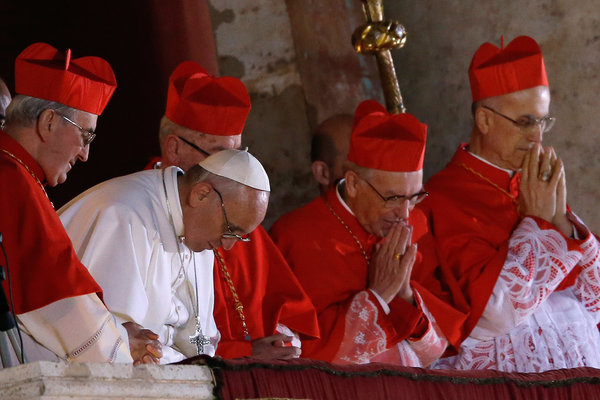 On March 13th, 2013, a council of Roman Catholic cardinals gathered in the Sistine Chapel to choose the successor to emeritus Pope Benedict XVI, who was the first Pope to resign, rather than die working his profession, in over 597 years. The last pontiff do to so was Pope Gregory XII in 1415. Upon watching the smoke emit from the chimney of the Vatican’s main cathedral, curious and convicted onlookers awaited the final decision of the College of Cardinals. At 8pm in Rome, the new pontiff was finally announced to the public, and the day would be one with many “firsts.”

The new Pope Francis I, also known as Mario Borgoglio, hails from the South American nation of Argentina, becoming the  first South American to lead the Catholic Church. In choosing Francis, 76, who had been the archbishop of Buenos Aires, the cardinals sent a powerful message that the future of the church lies in the global south, home to the bulk of the world’s Catholics.

Pope Francis is widely known as a humble man who spoke out for the poor and led an austere life in Buenos Aires. He was born to Italian immigrant parents and was raised in the Argentine capital. But he will face challenges he had not previously experienced as a regional archbishop. The new pope inherits a church wrestling with an array of challenges that intensified during the term of his predecessor, Benedict XVI, including a shortage of priests, growing competition from evangelical churches in the Southern Hemisphere, a sexual abuse crisis that has undermined the church’s moral authority in the West and difficulties governing the Vatican itself.

Francis will also inherit power struggles over the management of the Vatican bank, which must continue a process of meeting international transparency standards or risk being shut out of the mainstream international banking system. In one of his final acts as pope, Benedict appointed a German aristocrat, Ernst von Freyberg, as the bank’s new president.

In other words, while the election of the new leader of the Roman Catholic Church excites a multitude of Christians around the world, the years that lie ahead will be no smooth climb for Francis. The issues that face  the Vatican are immense challenges for the 266th pontiff as he takes on the leadership of one of the most widespread religions in the world.

The New GOP? The Republican Party’s Need for Change

Be the first to comment on "Catholic Cardinals Elect New Pope"