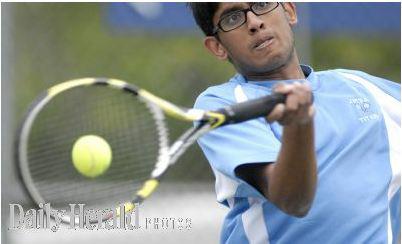 The Illinois Mathematics and Science Academy has some of the brightest students in the state of Illinois. But what it doesn’t have is a sports pedigree. Well, in most sports. However, a traditional strength of our athletic program has been the tennis team and this year’s version raised the bar significantly.

Last year, the team underwent a transition. A new crop of sophomore players that were as raw as they were talented added new life to the team which had recently lost a couple of state qualifiers. Despite the influx of youth, the team enjoyed limited success.

This year, however, the core of the team was one year older, one year more experienced, and supplemented by another impressive sophomore contingent.

The results have been spectacular.

He’s right. In fact, the team has only lost three meets thus far and are entering the sectional tournament with an impressive 10-3 record. Kenneth Yun, a junior, and Rajiv Patel-O’Connor, a sophomore, who make up the number one doubles team look like strong candidates to make the state tournament and are seeded fourth for sectionals. Paul Wang (sophomore) and Sinha have also played very well throughout the year at second doubles.

Sinha explained that the team’s success can be attributed to its depth. He says, “We are so deep and have so many sophomores that are basically very talented individuals like Rajiv, Paul, JJ (Garcia) and all of them are very talented and therefore it allows us to play much friendlier positions.”

“I also noticed that the talent difference is no longer existent in our team. We especially have many doubles teams that are equally good,” he continued.

The team’s success should continue next year because only four seniors will be departing at the end of the season. Furthermore, the Junior Varsity team, made up entirely of juniors and sophomores, went undefeated this season. The future looks incredibly bright for the team.

But all in all, the results don’t seem to matter much because the team itself has formed a tight bond. You can tell when speaking to any of the members on the team that they enjoy each other’s company and drive each other to improve.

Of course, winning isn’t bad either.

Be the first to comment on "IMSA Varsity Tennis Season Recap"