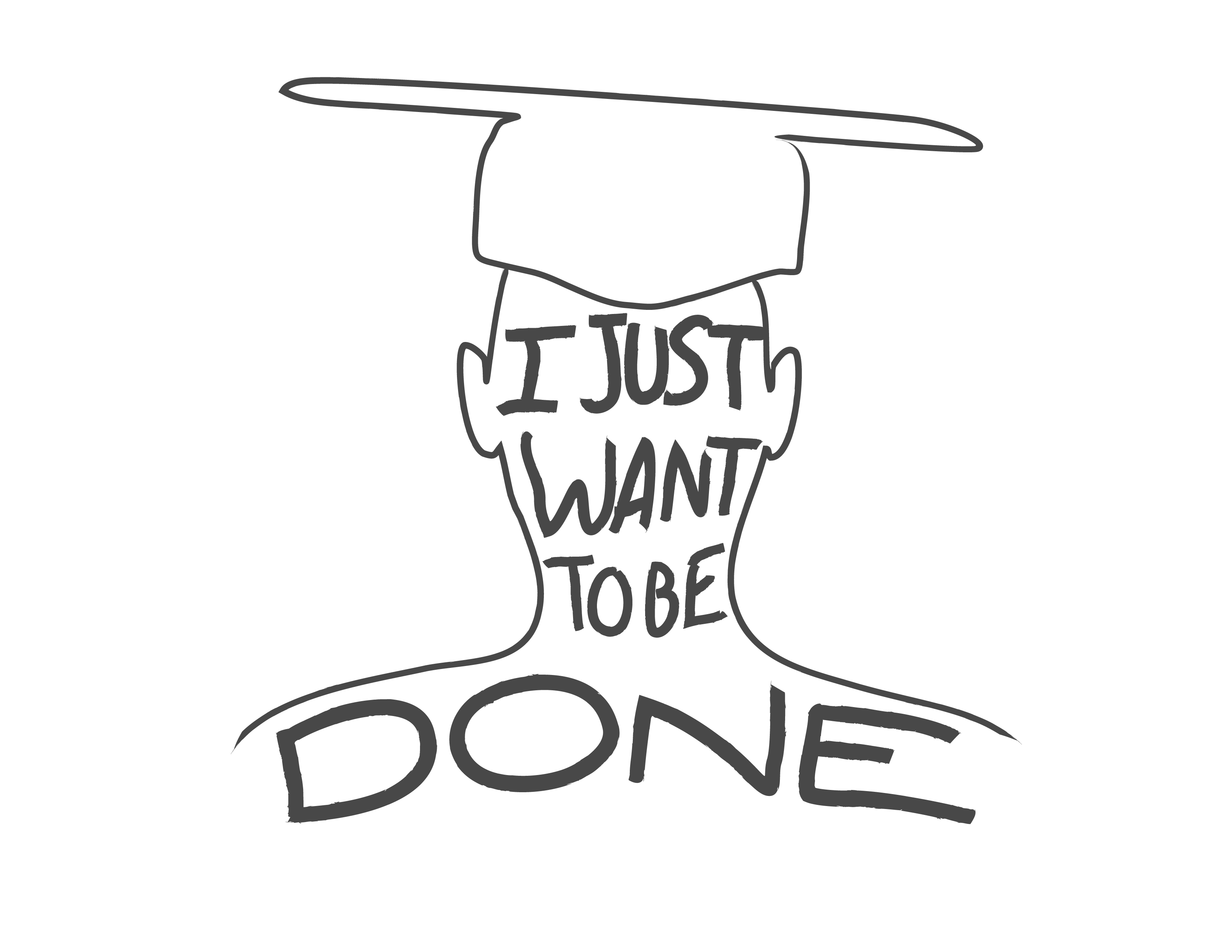 It’s that time of year again as the Second Semester Seniors (SSS) start to rise from their beds.

I would imagine that the students on campus who identify as SSS are nodding their heads in satisfaction while reading this article dedicated to them, while the underclassmen read this article with a bit of jealousy. If you’re a senior who’s having trouble evolving (or perhaps devolving) into one of the “SSS,” fill up your time by trying out some of the TV shows or even catching up on some good books. Leave your thoughts and suggestions in the comments below.

TV Shows:
While popular shows such as Game of Thrones and The Legend of Korra may already have a spot on your list, it would be in your best interest to add these as well!

New Girl
Coming to the end of its third season this spring, New Girl stars the “adorkable” Zooey Deschanel as Jess, who, after a bad break-up, becomes the new roommate of three male strangers. A light-hearted show, New Girl derives most of its comedy from Jess’ funny antics and her roommates’ lack of knowledge about girls. The characters are all incredibly appearing because they are so down-to-earth and relatable. Viewers like myself understand all the awkward situations in which the characters find themselves. Most importantly, however, the show reveals to viewers that they might not be as awkward and geeky as they think. If you’re not looking to throw yourself too far into the world of TV, give New Girl a shot!

Community
Currently running in its fifth season, Community is a sitcom about a ragtag group of misfits who all end up at the same introductory Spanish class at Greendale Community college. The best thing about Community is its relatability to any audience. With its diverse types of humor, from intelligent puns to vulgar jokes, chances are that anyone can enjoy Community. A lot of the show’s humor also comes from nitpicking the individual characters’ quirks. Some of the most memorable Community episodes are their “genre” episodes, in which the episode becomes a spoof of some other popular television genres. For example, Community has aired spoofs of zombie or crime television shows. A show that deserves a lot more hype, Community is a hilarious show that any teenager will enjoy.

Teen Wolf
Currently in the second half of its third season, Teen Wolf breathes life into the “adolescent fantastical creature” genre, which has been so popular in recent years. As the name would suggest, the show is about teenage Scott McCall’s life in Northern California after transforming into a werewolf for the first time from a bite. Compared to other teen supernatural dramas such as the Vampire Diaries and Twilight, Teen Wolf balances romance with developing mythology, characters, and suspense. The show strays from typical werewolf and vampire mythology to focus more on unknown creatures such as the Japanese “kitsune” in its current season. A good plot that will keep its viewers on their toes, Teen Wolf is great for all audiences. Catch it on Monday nights on TV or on mtv.com!

Hannibal
About to launch into its second season, Hannibal redefines the typical procedural seen everywhere on TV. Rather than having a case each episode solved by a quirky duo or group of detectives, Hannibal has a much higher level of continuity, along with a far darker tone. The main character, an FBI agent by the name of Will Graham, has an uncanny ability to empathize with others, and he uses his unique skill to apprehend murderers. As the show progresses, the viewers are taken on a terrifying trip deeper into Will’s psychosis as his ability begins to consume him. Not for the faint of heart, Hannibal’s plotline can only be beat by its tremendously effective cinematography and lighting. And it’s easy to catch up on, with just 13 episodes out so far.

Orphan Black
Tatiana Maslany is reason alone to watch this show. If the talented actress isn’t enough to convince to you to watch the show, Orphan Black also has a riveting plotline. The show follows a punk rock grifter named Sarah Manning, who runs into a woman who looks exactly like her at a subway station, just moments before the woman jumps in front of a train. As chaos erupts in the station, Sarah takes the dead woman’s bag, stealing the woman’s identity in order to clean out her bank account. Her plans, unfortunately, are thwarted when she gets pulled into the dead woman’s world of intrigue and, yes, cloning. With a fast-paced plot, lovable characters, and the immensely talented Tatiana Maslany playing 7 different roles, Orphan Black is a must-see TV show for everyone.

Brooklyn Nine-Nine
Another satire from the producers of Parks and Recreation, this new satire takes place in a police department of New York City. In the first episode, we meet the new boss Captain Ray Holt as well as one of his officers, the lazy and carefree Jake Peralta. Instead of the thrilling and exciting plotlines of other crime and police shows, Brooklyn Nine-Nine is a comedy that mocks all of the clichés and depictions of the police department. Like Community, viewers can appreciate that the humor is more intelligent than just a few vulgar or nerdy jokes.

Books
Sputnik Sweetheart
Some of you may be familiar with Haruki Murakami’s IQ84 and Kafka on the Shore, which are several of Murakami’s more recent titles. Sputnik Sweetheart, on the other hand, is one of his older and lesser known books. However, it is still a great read for anyone interested in modern literature. Sputnik Sweetheart is a story about a girl that the narrator unrequitedly loves. Although Murakami is a Japanese author, most of his books have little connection to Japanese culture. Rather, he discusses more familiar topics such as isolation and loneliness. Definitely not the most uplifting book, this book, along with Murakami’s other books, will give you a new perception about the integrity of this world, and on our relationships with others.

Outliers: The Story of Success
From the best-selling author of The Tipping Point, Malcolm Gladwell’s Outliers has received outstanding reviews as well. For many readers, non-fiction might not be your style. Despite initial preconceptions, however, I assure that Outliers is nothing like history or science literature that you may have read for research papers. In his book, Gladwell details his own perceptions of success, and how we are mostly interested in the extremely outliers, as suggested by the title. I would definitely recommend this book to anyone who may be confused about their next step in life, and on how to achieve success. Gladwell expertly encourages to think differently about your definition of success.

Manga
Sailor Moon
Before you start laughing at this suggestion, reminisce about your childhood days of of tuning in to watch Sailor Moon. Sailor Moon was best known for featuring a cast of strong female characters, unlike the typical damsels-in-distress or the girls-next-door tropes. The show inspired a generation of young viewers to believe in themselves and stay loyal to their friends. Unlike the televised counterpart, the original Japanese manga more strongly conveys this message to young audiences. While the manga might be 20 years old, Sailor Moon will be returning with an anime reboot, currently slated for a July 2014 release. In the past year, the manga was re-translated from the original Japanese to retain more of the author’s original meaning and to incorporate more Japanese culture than the previously “Westernized” version. After revisiting the series you may find much more depth and meaning behind Naoko Takeuchi’s memorable work.

Silver Spoon
Better known for the outstanding series Fullmetal Alchemist, Hiromu Arakawa now works on Silver Spoon, a manga inspired by her childhood on a farm. (As a fair warning, however, if you’re looking for something like Fullmetal, Silver Spoon wouldn’t be the best choice.) Silver Spoon follows Japanese high school student Yugo Hachiken as he is trying to answer the question we all ask ourselves, “What do I want to do in life?” To find his answer, Yugo runs away from the city and to attend agricultural school in the countryside. Although Silver Spoon lacks butt-kicking action, it is quite compelling with its slow, slice-of-life storyline. Silver Spoon definitely has its quirkier side, with Yugo’s struggles with animals and the farm in general. Although I was initally reluctant to pick it up after reading Fullmetal Alchemist, Silver Spoon is an incredible series, and I encourage you to give a shot.

How to IMSA: A Final Note