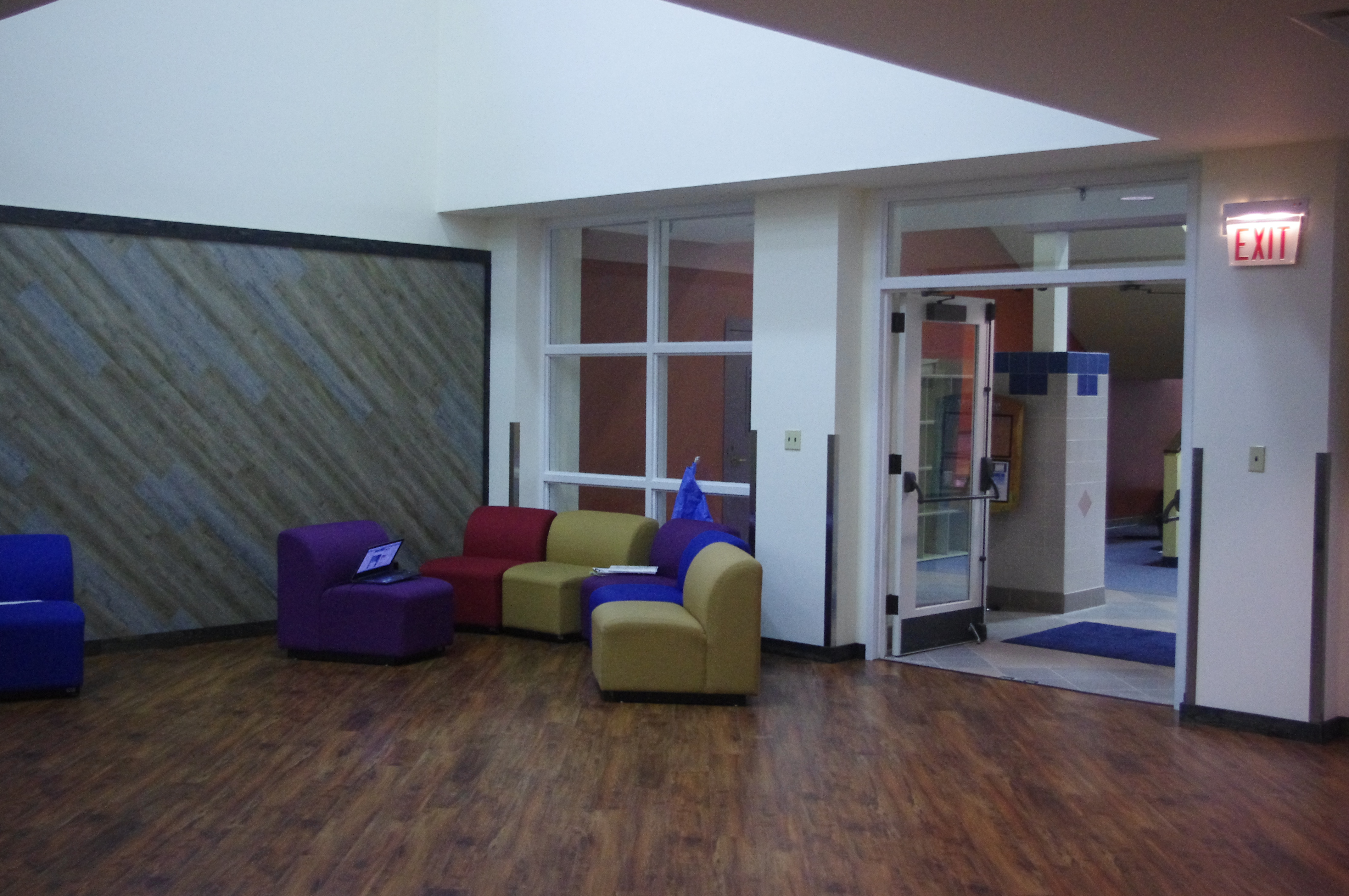 What was once someone’s dream is now a reality! The Titan Cafe, as Dr. Bob called it in his email to parents and students, is now open for use! Located immediately outside of Sodexo, mostly every student has noticed that there is now a lounge area in what was formerly Sodexo. Completed in only 8 weeks, the space is decorated with an incredible amount of wood… or something that looks like wood!

The Acronym asked dinner attendees what they thought of the influx of “wood” paneling. Natalie Valentine, an 06 sophomore, offered the observation that “There’s a lot of wood. It’s nice but… there’s a lot of it.” 07 senior Dennis Rich, shared that “[The wood] reminds me of a log cabin. Secluded. In Minnesota.” They didn’t even mention the 8 foot tall sliding barn door that is now the entrance to Sodexo. It’s rustic feel is starkly contrasted to the pastels and metals that characterize Sodexo.

The new lounge is barren right now, with only a few refugee couches from the Mac Lab laid out in the corner across from the new coffee maker. That coffee maker, by the way, is top of the line. It is an industrial design, workplace-oriented machine that can handle anything from coffee to tea to hot cocoa, with drinks available for $1 during any sodexo hours. If you’re cheap, though, you can bring your own drink and just use the hot water to brew your own tea. The machine not only intrigues students, but the Sodexo staff as well! Diane, a member of Sodexo’s staff, said that she was excited to see students get a nice drink once in a while.

In the walls and floor, there is another interesting addition to the Titan Cafe. The black plates lining the walls just a foot off the ground may look like standard wall outlets, but upon closer inspection, they reveal two USB ports designed so people can charge their phones easily and conveniently–same goes for the gold plate on the center of the floor. Those are not the only charging solutions to come to the new Cafe. A charging station–a nice round table with various phone chargers and outlets available for use–will be placed conveniently in the center.

To liven up the rest of the room, though, Dr. Bob and Student Life have some serious plans. IMSA has already ordered four bar-height tables for people to sit at and work. These high tables were inspired by the kinds of tables found at Starbucks and other coffee houses. Also, the couches that used to be in the Mac Lab are not the final couches for the Titan Cafe. The design and color of the couches that will replace them are available in the Student Life office for anyone interested to see.

Many students wondered how IMSA could have afforded this fancy new expansion. After all, with all these fancy new features, this must have cost a fortune. When asked, Dr. Bob explained that the entire plan for this project is older than most people think. The plan for a new student lounge has been in the works for at least three years; this year’s developments of an Engineering Lab, 1508, and the Titan Cafe are all coincidental. The funding for this particular project was secured in years past from the IMSA Fund, a 501 (c) not-for-profit that accepts gifts on behalf of IMSA and issues grants to various IMSA departments. The project was also a massive endeavor to get the most bang for IMSA’s buck. Features were recycled from IMSA’s old stockpiles where possible and all of the labor was done by IMSA’s staff, save moving the salad bar. Yep. That means that some of the parts for the big barn door might have already been laying around IMSA.

To fully experience the lounge, though, one has to actually visit. Sitting outside of dinner listening to passersby, the general consensus seemed to be an intrigued curiosity, fueled by an ever present desire for something different, anything different from our daily lives at IMSA. There were “Oohs” and “aahs,” perhaps best summarized by Vinesh Kannan, the sitting StudCo President, when he described the lounge with a high pitched “Nice!” People who looked as hungry as ever were enticed to look around, stop for a minute to see what this big new space is like. Novelty goes a long way to make our lives at the Academy brighter, and with promises of a continually improving space, the Titan Cafe–or whatever it will be called as students come in– raised hopes of pushing our home in the right direction.

Sodexo vs. Fast Food Chains: Which is Healthier?

Be the first to comment on "The Titan Cafe: From Wood Paneling to New Drinks"