At my required physical examination before the beginning of sophomore year, my doctor cautioned me about staying healthy at my new school.

“Choose nutritious options at mealtime,” I remember her saying. “I had a couple of patients who gained weight after coming to IMSA.”

Though this is not very surprising as students are free to eat anything they please, it’s a bit contradictory to Sodexo’s goal of “helping people to create a better lifestyle.”  Being curious about the validity of this statement, I decided to compare their nutritional value of Sodexo’s most popular foods with the respective versions from fast food chains.

(All images were taken from https://www.imsa.edu/studentlife/weekly-menus, Google Nutrition Tables, and http://www.myfitnesspal.com/food/calories/dominos-pizza-extra-large-16-inch-hand-tossed-crust-with-pepperoni-20435613) 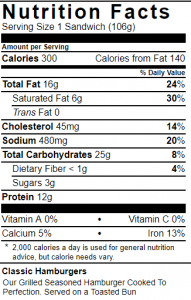 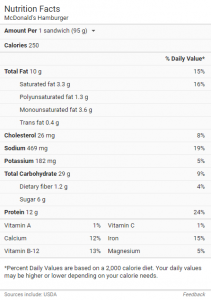 Sodexo’s seasoned hamburgers are far from perfection, but they often make a quick go-to lunch or dinner for non-vegetarians. (The Garden Burger, is, unfortunately, a whole different story for vegetarians.) However, when compared with nutritional values for McDonald’s classic hamburger, consumers may find an unexpected result – McDonald’s, it seems, is the healthier option. While both groups are comparatively the same on levels of sodium and carbohydrates, McDonald’s stands out because it has around half the saturated fat. 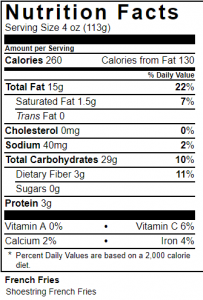 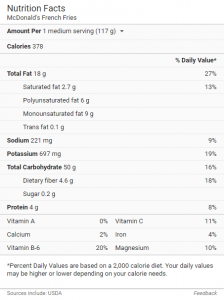 In terms of calories, Sodexo’s fries largely defeat their McDonald’s counterparts since one serving contains roughly 118 fewer calories. Sodexo fries are also less plentiful in other categories, such as sodium, carbohydrates, and fat, though these benefits are not as significant given the small differences. Though eating fries at Sodexo is arguably a better alternative than ordering off of McDonald’s, regularly eating fries, in general, may be a detriment to your health. Nearly 100% of calories from fries in either company come from fat and carbohydrates, and little nutritional value is provided as compensation. 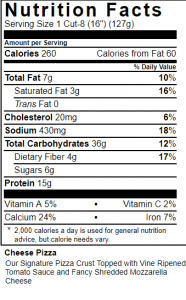 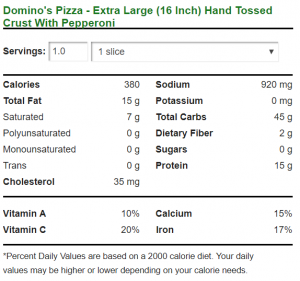 Sodexo pizza’s Domino’s equivalent – 1/8 slice of an Extra Large 16 inch pizza, looks far more detrimental in nutritional value than the Sodexo version. Of course, taste and quality are debatable, but in regards to caloric intake, sodium, and cholesterol, Sodexo pizza wins by a wide margin. Sodium, probably one of the most concerning facets of Sodexo food, is nearly doubled in Domino’s version compared to Sodexo’s. Perhaps a surprising benefit of Sodexo pizza is the calcium intake – 24% as compared to Domino’s 15%. 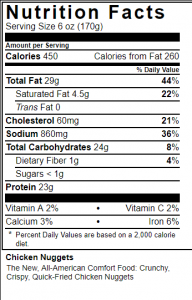 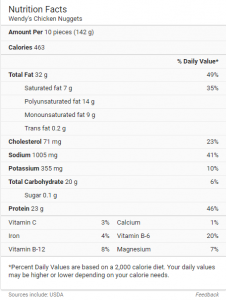 Unlike their hamburgers, Sodexo’s chicken nuggets live up to their description. When available, lines for these “crunchy, crispy, quick-fried” bites extend to the salad bar only minutes after midday begins, and those who are lucky enough to have the next mod off come rushing back for more. Given these chicken nuggets’ popularity among the IMSA population, how do they compare with ones from Wendy’s, a product featured in Twitter’s most retweeted tweet of all-time?

At first glance, the two options seem equal, but when considering the differences in serving size (142 grams for Wendy’s and 170 grams for Sodexo), the slightly greater percentages of detrimental macronutrients for Wendy’s are inflated. Similar to Domino’s, Wendy’s option has significantly more sodium than Sodexo and more of saturated fat. The overall fat percentages for both are enormously high, with one serving accounting for 44% or 49% of a person’s recommended daily intake. However, Sodexo servers have a tendency to give out 3 or 4 chicken nuggets to each person in line, so these values are realistically halved.

Overall, the nutritional quality of Sodexo’s most popular foods doesn’t earn bragging rights. They are generally high in fat, carbohydrates, and sodium, though sometimes these nutrients come in less heaping quantities than the equivalent option at your local fast food joint. Staying healthy at IMSA means learning how to balance more nutritious options with your favorite treats. Hamburgers and fries are not bad when eaten occasionally – just don’t make that your daily lunch for an entire semester.

A Detailed Guide to the Optimal Lexington Experience

1 Comment on "Sodexo vs. Fast Food Chains: Which is Healthier?"