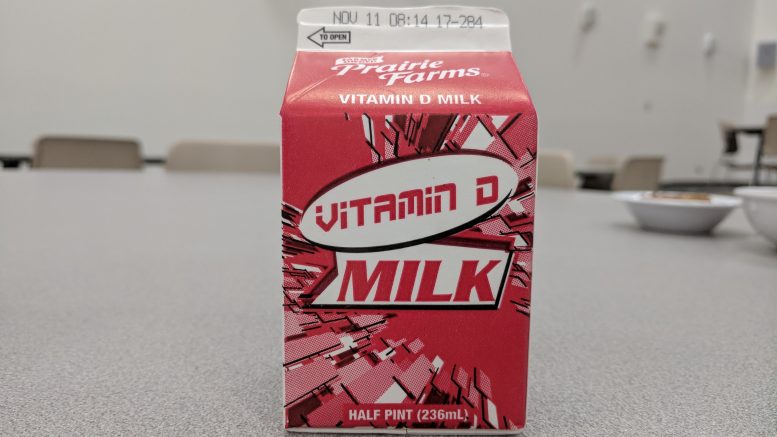 This is not a drill. I repeat, this is not a drill. After years of dispensing milk out of machines, Sodexo has instead switched to stocking the cafeteria with flimsy red and blue cartons (pictured above). The reason for the switch is still unknown, but it certainly hasn’t gone unnoticed. Students all over campus have expressed anger and annoyance over the sudden switch. One student, who took to 1508 to voice his disapproval for the change, remarked that he “no longer [gets] milk because the cartons make it too much of a hassle.”

What? Are we now expected to walk all the way to the refrigerator just to get a small amount of milk that we struggle to open properly? IMSA students are already overburdened with the responsibility of homework, extracurriculars, and SIRs. We simply can’t afford to take the time that it takes to deal with drinking milk from a carton.

Sodexo also failed to run a proper environmental impact study on the effects of switching to disposable cartons. What would Club Terra do? IMSA students strive to be environmental-friendly, and these milk cartons deprive them of that lifestyle. Yes, milk drinkers could walk twenty feet outside of Sodexo to recycle their cartons, but who has time for that? It’s easier just to find something else to drink.

Milk is a tasty, nutritious alternative to sugary drinks, and therefore, it should be accessible to all. So why would Sodexo make it harder to obtain milk than it is to obtain soda? Most people would say that I’m looking too much into this — that the cartons were probably just easier to manage. Most people are wrong. Is this some kind of anti-Michelle Obama scheme, a grand plan to replace our healthy dairy with soda? While the answer still looms large, the evidence is all around us. Not only has the milk been relegated to a far-off corner of Sodexo, but the ice cream machine, even after multiple claims that it would be working again, remains dormant and unable to comment on its newest neighbor.

We may not learn Sodexo’s true intentions with regards to dairy anytime soon, but one thing is for sure: we must take a stand. Milk is essential to building healthy and strong bones. Any attempt to prove otherwise is Sodexo propaganda. If we want to save this vital part of IMSA culture, then join me in saying, “Give me milk or give me death!”

4 Easy Ways to Transform Sodexo into a Gourmet Meal

Be the first to comment on "The Sodexo Milk Conspiracy"