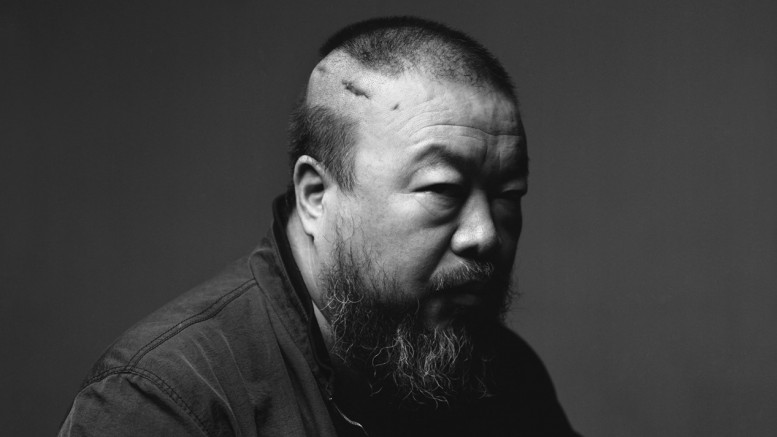 Critics will pick apart art, whether it appears on canvas or on concrete. Artists can transform art into a communicative device, one that relays its creator’s ideas and opinions. Nonetheless, all art is subject to the eyes of a judging audience, especially when concerning topics as real and pertinent as the situation in Syria.

Over 1 million Syrians migrated into neighboring European countries in 2015 alone, and over 3 thousand Syrians are either dead or missing in attempts to seek refuge in neighboring countries.1 The Islamic State (IS) has taken devastating action, and internal war puts millions of Syrians at risk. Although the major offensives are within Syria, violence, abuse, and economical issues have also driven additional persons from their homes and into nearby areas. While the number of those seeking refuge increases, the growing number of those dead, missing, or unaccounted for should not be overlooked. The United Nations (UN) and other external powers have brought Syria’s crisis to their attention, and for the most part continue to provide aid for Syrians and refugees. (2)

In an example of art portraying and critiquing current events, Ai Weiwei’s work takes a stand on the Syrian dilemma. Ai Weiwei is a Chinese artist known for his contemporary work, especially the cultural and political statements relative to his art. In difficult, often critical times, Ai Weiwei dedicates his art to convey a message, sometimes of hope, other times of help — a silent, yet visible broadcast to the world that certain issues need to be addressed and realized by a larger community. (3)

Recently, Ai’s most notable work has reflected his political standpoint on the situation in Syria. Ai withdrew his art from museums in Denmark as a personal counter to a proposed law, passed January 26th. The law contains  several seemingly anti-immigration measures. Translated from Chinese, Ai wrote,

I am very shocked about yesterday’s news that the Danish government has decided to seize refugees’ private property. As a result of this regrettable decision, I must withdraw … to express my protest of the Danish governments’ [sic] decision. Please accept my regrets and thank you for your long-term support. I apologize for the inconvenience caused. (4)

At that time, Ai made an effort to respectably demonstrate his views. Yet, Ai would later display his opinions in a more outwardly shocking manner.

Early February, Ai posed for a photograph on the same island where a drowned Syrian toddler was found. Last fall, a single photograph astounded communities worldwide; a photograph of young refugee Alan Kurdi dead on the beach. Ai mimicked Kurdi, except with his face pointing toward the camera. This imitation signified Ai’s stronger position on the subject of Syria, and evoked stronger emotions from his audience.(5) 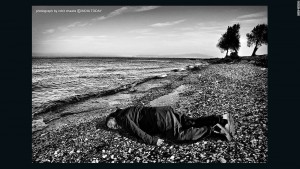 Ai set up his studio in Greece early this January, stressing to reporters, “As an artist, I have to relate to humanity’s struggles … I never separate these situations from my art.”(7) Because of his lack of separation, there is an aura of authenticity with Ai himself. Ai realizes the importance of the refugee crises and personalizes his response through art. Some viewers claim that Ai’s work is disrespectful, inciting some outrage. Others take Ai as he is: an artist taking bold steps in order to fully express his disdain with the current refugee mess. The original photo alone was enough to move the public to recognize the urgency and importance of the situation; Ai will not let that movement be forgotten. Though at times victim to criticism, Ai preserves his role in the world of political, modern art.

Only a few days ago, Ai made his most monumental visual statement on the refugee situation thus far. Coating the columns of a Berlin landmark with 14 thousand refugee life jackets, Ai introduced a staggering number of victims’ experiences to the limelight. Not only are those affiliated with Syria affected, but the sheer number of Syrian refugees far exceeds the number of lifejackets on display. (8) Lifejackets as a form of drapery yield a physical reminder of the struggle faced by refugees. Ai’s landmark installation possibly symbolizes the rough voyage made by millions of refugees to get where they are and the difficult journey ahead.

With each action Ai takes through his art, he openly presents his beliefs to the world. He puts art on display that he knows can shock the public, striking them so that they react in favor of the refugees. Ai continues to broadcast the harsh reality of the refugee situation, employing his art as his greatest tool. 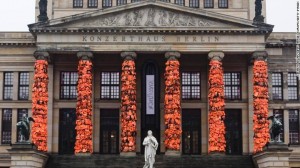 See more of Ai Weiwei through:

What is That, Above the AC Pit Stairs?

Yet Another Yare Appears

Fashion and Its Necessary Redefinition

Be the first to comment on "Ai Weiwei: Art Displays Broadcast Importance of Refugee Crises"