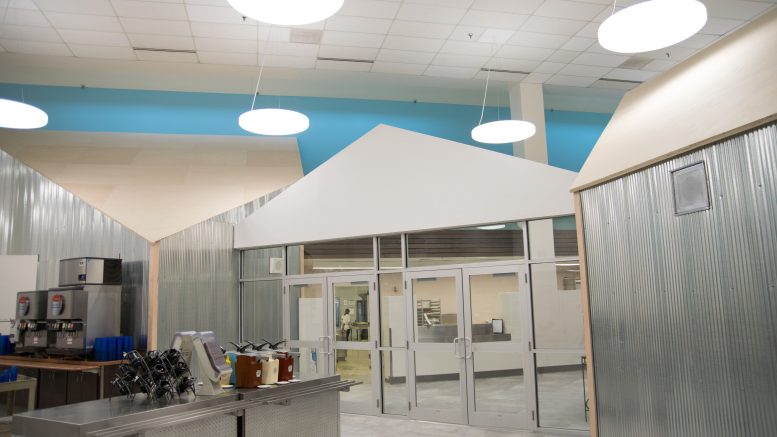 On Monday, many IMSA students coming back from their Columbus Day extended weekend were confused and shocked to see Sodexo’s newest addition- glass hinged doors.

These sleek grey doors now separate the serving lines from the eating area, but they have stirred quite a discussion in the process. Some students see the addition as an unnecessary barrier hindering the formerly smooth flood of students at midday while others believe they were a needed improvement for creating a more modern IMSA.

“The doors are a good thing for renovation,” says Christopher Guo (’18). “I understand administration’s mindset about making IMSA look nicer, but I think our funding is being wasted partially because that money could go into sport equipment and academics in general instead of focusing on ISSF (International Student Science Fair). I think most of it is due to making ISSF look better, but, on the other hand, it’s also taking away all the money we received to make one science fair look nice instead of focusing more on the long run.”

This line of thinking has become the consensus among the student body. The coincidental timing of these new renovations before ISSF 2018 has caused many to speculate IMSA’s investments on this manner to be ill-advised and to perceive new add-ons as ostentatious and pointless in the grand scheme of things.

However, the new construction is not a direct response to ISSF. Leaving IMSA’s Cold-War ’80s aesthetic behind requires a gradual overhaul of the school’s architecture. Peter Dorger, the Facility Operations Manager, says the new doors along with other additions are “a part of the overall change of the look of IMSA. My boss worked with several architects and they came up with a lot of the changes. This new IMSA is kind of sectioned up and one of the first areas we decided to tackle is the Cafeteria because we are focusing on high-impact areas that will immediately influence the students and faculty every day.”

You may be unaware of just how many renovations IMSA has gone through since the past three years. Obvious additions like IN2 have attracted much attention and praise, but other new addition like Sodexo’s lounge area have been overlooked.  From “The Loft” near the new science classrooms upstairs to the currently under-construction gender neutral bathrooms in B-wing, IMSA is making dramatic changes to the school. This new IMSA look is most prominent with Sodexo. Along with the door, there has been new LED lights have been added to be more energy efficient, as well as, new titles to replace the formerly cracked floor, and even a new carpet, walls, and a raised platform with a handicap accessible ramp.

The structural Renaissance has also extended to B-wing’s Biology offices and classrooms. Even though construction has not begun quite yet, Mr. Dorger assures that it will commence soon since a meeting was held on Tuesday; they discussed a new bid after there were some hang-ups with the first two. “It’s going to happen. It’s just a matter of the contractors meeting the requirements of the state.”

Despite all of these changes, some students in the student body feel like their voices are being ignored and believe the Academy is acting on its own ill-advised agenda without paying attention to student’s requests. Pleas have included bringing back Sodexo favorites such as cookie bake or even restoring the ruins of the tennis courts. But instead, a sizable new IMSA logo has been added to the entrance of Sodexo.

Even with some of these cries being unheard and other unwanted renovations continue, IMSA has definitely made some changes, but the question remains if the institution has either progressed forward or has regressed backwards to advancing the human condition.

What is That, Above the AC Pit Stairs?

Be the first to comment on "Renovations Galore! A New Image for IMSA"