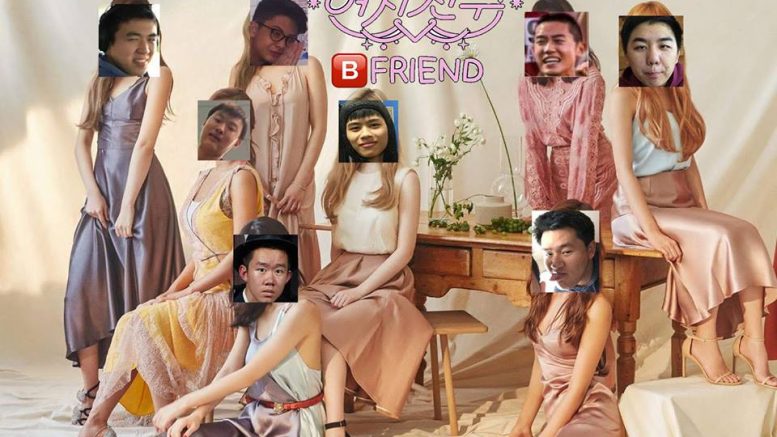 The rest of the world has GFriend, but IMSA’s community has something a little more special: BFriend. If you attended ASIA’s Lunar Show this past Friday and Saturday, chances are you watched their performance. The octet consists of choreographers Jimmy Ren (‘19) and Ryan Talusan (‘20), and dancers Scott Du, Bert Cao, Leon Li, Daniel Chen, Allen Chen, and James Lichtenstein (all ‘19). The group began their performance wearing black sweatshirts and black surgical masks, dancing to “Limitless” by NCT. However, the music quickly changed and the members revealed the pastel shirts and chokers underneath their sweatshirts.

The members then began dancing to songs such as “BBIBBI” by IU, “Renai Circulation”, and “What is Love” by TWICE. In between BFriend’s performance, another group, Brown Velvet (named after the group Red Velvet) danced to BLACKPINK’s “BOOMBAYAH”.

While this was the octets first performance, BFriend itself debuted in 2016 with a different set of idols. The group’s founder Simon Su (‘17), created the group with members Tim Pan (‘17), Andrew Ye (‘17), Roy Chiu (‘17), Robert Lou (‘17), and Chris Ni (‘16) after a promposal. After their first performance, the group decided to reunite the following year to perform during the Lunar 2017 show as an individual act. The original lineup of BFriend then recruited a set of trainees, and the group performed at Lunar 2018.

Of that group, veteran member Jimmy Ren returned this year for BFriend’s third Lunar performance and stated that he decided to choreograph because “it was passed down from generation to generation, and I was in it last year so it was my responsibility this year.” Other members stated they chose to participate because it seemed like fun. While the members of BFriend are well-intentioned, uncertainty about the messages portrayed by BFriend has arisen among members of the IMSA community.

A majority of BFriend’s dances and attire are traditionally seen as feminine, such as pastel colored clothing, choker necklaces, and winged eyeliner. Additionally, their songs and choreography themselves were originally created for K-pop girl groups. As such, having a group of guys doing generally “feminine” things raises some issues. While it’s completely alright for guys to do things that are labeled as “feminine,” part of the issue is the reception BFriend received during their performance. Amidst the applause and cheers from the audience, there was laughter. Arguably, this response reinforces the idea of toxic masculinity, as it portrays men acting feminine as laughable.

At the same time, BFriend can be seen as a way for members to step out their comfort zone and embrace things that are typically feminine, and the laughter may also be due to the fact that most of the members aren’t real dancers. While BFriend is entertaining and may remain a part of IMSA’s Lunar show in the future, it’s important to think about and challenge the reasons why we find it entertaining.

Be the first to comment on "BFriend: Origins and Controversy"