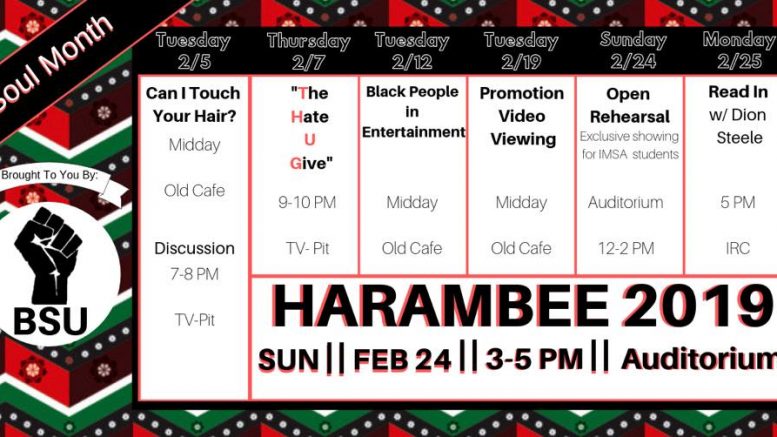 Every February on IMSA’s Diversity Day, Black Student Union holds its cultural show, Harambee. Each year, they have a new, professionally written script to perform. This year, the play was The Hate U Give based off of the novel by Angie Thomas and the recent movie. The film centers around Starr, a teenager who watches two of her best friends die while growing up. One of her friends, Natasha, dies as a child during a drive-by shooting. The other friend, Khalil, dies at the start of the play at the hands of a police officer.

Kya Richardson (’20) blew the audience away with her emotional performance as Starr. It was impossible to avoid feeling emotional when Khalil is shot in her presence. Her performance was so realistic that it was difficult to remember that Isaiah Crews (’19) was only pretending to be dead. Other notable performances included Elange Tande (’19) acting as a concerned and caring mother, as well as Cassy Kuissi (’19) acting as an activist and attorney. Although these performances stood out to me, every single actor had their lines, expressions, and reactions nailed down to perfection. Their hard work definitely showed on stage.

In between scenes, other performances filled the show. Mod 21 sang “Lift Every Voice and Sing”, the Black National Anthem, towards the start of the show. Later on, Chicago Two-Step filled the stage. The choreography, both sweet and intricate, was executed extremely well by all of the dancers. African dance followed later. The dance, although fluid, was complicated to learn, and the ability of every dancer to perform all of the choreography should be commended. SDAC, led by Jayda Yancey, performed a step dance with no music followed by a hip-hop dance which led perfectly into Hip-Hop. Hip-Hop was plainly fun to watch. The entire group did part of the dance together but then split into parts which did different things in the center while the rest of the group cheered them on. Watching them was extremely entertaining, and cheering along with them definitely got the audience excited about their performance.

BSU never fails to pull together an amazing show. Although this past week has been stressful due to Clash of the Halls prep taking place at the same time, terrible weather, and an entire play to perform, they pulled it off even better than they always have. If you haven’t seen Harambee, do yourself a favor and check it out here.

Behind the Scences of Harambee

Be the first to comment on "Harambee’s Incredible Impact"