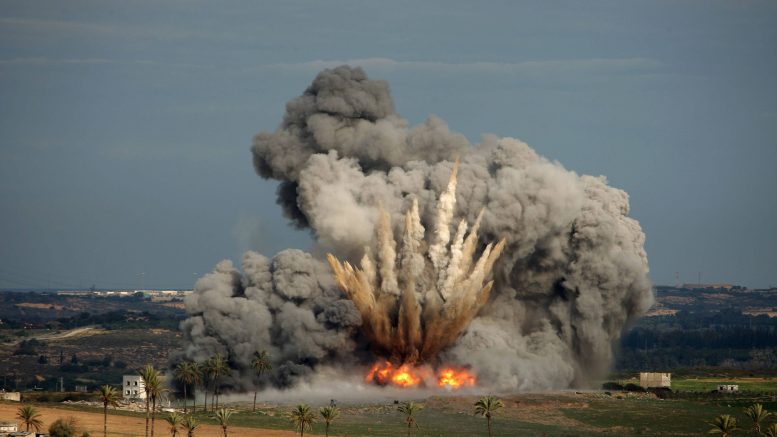 A picture taken from the Israeli side of the border with the Gaza Strip shows a bomb dropped by an Israeli air force F-16 jet exploding in Beit Hanoun, north of the Gaza Strip, on January 3, 2009. The Israeli military has carried out more than 700 strikes on Gaza since it launched a massive offensive on Hamas a week ago, killing at least 435 Palestinians, the army and medics said today. PATRICK BAZ/AFP/Getty Images

Last weekend, fighting broke out once more in the Gaza Strip and southern Israel, coming just before the Muslim holy month of Ramadan and Israel’s Independence Day. The violence began Friday, May 3, when a sniper from Gaza shot across the border and wounded two Israeli soldiers. From there, the conflict quickly escalated – over the course of two days, Israel’s military reported that Palestinian militants from Gaza had launched over 600 rockets and mortar shells into southern Israel, and the Israeli military carried out air strikes on 320 militant sites in retaliation. In the brief but deadly fighting, four Israeli civilians were killed by rocket and missile attacks, although the country’s Iron Dome anti-missile defense system was able to shoot many of the projectiles down before they could do damage. Gaza officials reported 22 deaths, among them at least nine civilians. Egypt, Qatar, and the United Nations have all helped to mediate a cease-fire, and the violence has since come to a precarious pause.

However, this is far from the first time that conflict has arisen in the Gaza Strip. Since 2007, when the fundamentalist Islamic group Hamas took power in Gaza, Israel and Gaza have been caught in a vicious cycle of violence, cease-fire, and repeat, constantly on the verge of all-out war. Although the most recent fighting is the worst since a 50-day war in 2014, similar violence broke out between Israel and Gaza as recently as March. 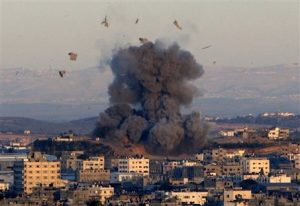 The tension in this region is further fueled by the 2 million Palestinians currently living in Gaza with limited access to essential goods and services. In response to Hamas taking power in 2007, Israel set up a land, sea, and air blockade under the rationale that such measures are needed to prevent weapons from reaching Hamas, an organization that Israel considers to be terrorist. However, Gaza’s economy has suffered for over a decade because of the blockade, with the World Bank reporting 52% of the population to be unemployed and living in extreme poverty. Palestinian protests began along the border roughly a year ago in response to the blockade, further contributing to the violence.

Last November, there seemed to be a breakthrough promising less violence in the future. Israel agreed to allow money from Qatar and humanitarian aid to enter the Gaza Strip and expanded the fishing zone in the Mediterranean open to Gaza fishermen. In return, Hamas promised to make efforts to curtail the protests erupting along the border, many of which have culminated in the repeated violence seen throughout the region. However, a true cease-fire has not yet lasted long, despite these recent measures – the extended fishing zone of 15 nautical miles was just scaled back to 6 in response to recent attacks on southern Israel, and violent protests have clearly continued. And while a precarious cease-fire remains, military leaders from the two factions have spent the last week exchanging threats.

For now, Egyptian-brokered talks seek to stabilize the region, and the United Nations has continued to call for peace. On Sunday, the UN chief urging both Israel and Gaza to “immediately de-escalate” and return to the Egypt-brokered and UN-backed truce of the last several months. The United Nation’s Special Coordinator for the Middle East has issued a similar statement, saying that “this endless cycle of violence must end.”

Eva is a junior from Lombard who lives in 1506 A-wing. She is super excited to serve as the Co-Editor-in-Chief along with Jodie Meng for the 2019-2020 school year! Outside of The Acronym, she's involved in Lincoln-Douglass Debate, SIR, and some of IMSA's entrepreneurship programs.