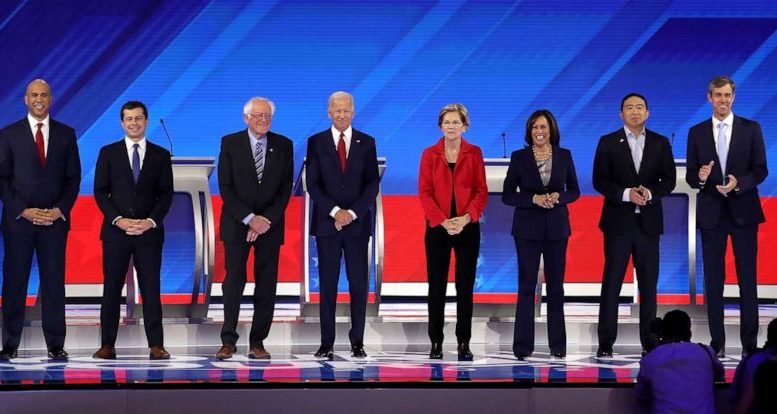 Canditates stand on the stage of the third democratic debate. | Source: Abcnews.com

The 3rd Democratic debates were held this past Thursday, September 12th at Texas Southern University in Houston. They were hosted by ABC, and the moderators included George Stephanopoulos, Lindsey Davis, David Muir, and Jorge Ramos. Discussions revolved around hot topic subjects, including climate change, gun control, immigration reform, and education.

When a stunning 20 candidates participated over two nights in July’s second primary debates, it was difficult for many viewers to differentiate between the large pool of candidates. Since then, the number of candidates qualifying for debates was cut in half, and these September debates showcased only 10 candidates.

So who is still left in the race?

There were many memorable moments during the debate that received media attention.

One such moment was when Julian Castro questioned Joe Biden about his health care plan, asking “Are you forgetting what you said just two minutes ago?” Castro went on to state, “I’m fulfilling the legacy of Barack Obama and you’re not.” His attacks on Biden during the debate were certainly controversial, and he was asked many times about his statements in post-debate interviews. At one point, Pete Buttigieg got between Castro and Biden during a heated exchange, exclaiming that the debates were becoming unwatchable as they were reminding people what they couldn’t stand about Washington.

Andrew Yang, in his opening statements, announced that his campaign would give $1,000 a month for an entire year to ten American families. This is part of his plan for a universal basic income, which is a major part of his platform. Several articles have since been published about whether this offer is legal, and Yang’s proposal was touted by his supporters and also comedians such as Trevor Noah and Stephen Colbert.

Beto O’Rourke spoke forcefully on the issue of gun control, saying, “Hell yes, we’re gonna take your AR-15, your AK-47. We’re not going to allow them to be used against our fellow Americans anymore.”  His buyback program, which will require  AR-15s and AK-47s owners to sell their guns to the government, has generated significant criticism due to its apparent defiance of the Second Amendment. Soon after O’Rourke’s statement, a Texas representative who tweeted back, “My AR is ready for you.”

Of course, these were only a few moments of the debate that garnered attention. There were many more statements made and questions asked during the debate, which covered a whole variety of topics. Candidates dueled over health care, criminal justice, Afghanistan, and education. This was an opportunity for candidates to address each other and the American people about their beliefs and stances going forward.

The next democratic debates will be held October 15th (and possibly the 16th as well) near Columbus, Ohio. They will occur at Otterbein University and will be co-hosted by CNN and the New York Times.

At the time of this writing, all ten of the candidates we saw on Thursday will be present at the next debates. Furthermore, Tom Steyer, an activist and billionaire from California who was not on the stage Thursday, has qualified. Marianne Williamson and Tulsi Gabbard, who were both present at the debates back in July but didn’t qualify for this past Thursday, still have the potential to qualify for next month. Both candidates have met donor requirements but not the polling requirements.

Am I eligible to vote?

Be the first to comment on "What Happened at the Democratic Primary Debates?"