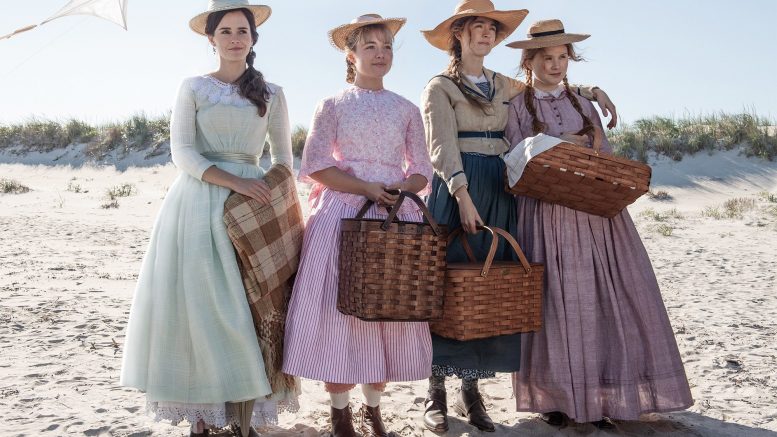 Seriously, this has major spoilers.

Little Women, the inspiring novel by Louisa May Alcott, is one of the most influential and revered pieces of coming-of-age fiction. Many young girls, including myself, adopted the witty and stubborn Jo March as their personal role model. Because of the vast impact and nostalgia elicited by the original book, Little Women has been adapted into movies, television shows, plays, an opera, and even a ballet.

On Christmas Day 2019, another film adaptation of the classic book came out, this time with a few twists. So, I ventured to the theatre, fully expecting to eat an unhealthy amount of popcorn and experience another somewhat disappointing book-to-film adaptation of one of my favorite books. But instead, to my amazement, I experienced an amazing film that did not disappoint. Written and directed by Greta Gerwig, this adaptation embodies much of what makes the original so beloved, while introducing some risky changes that pay off brilliantly.

For one, the most recent movie seamlessly intertwines the story we know and love with Alcott’s own publishing journey of being a female creator in a male-dominated, marriage-driven time period. Instead of abandoning her writing in favor of marriage as she did in the book, Jo March publishes her own book and embarks on a literary journey, following her passion and proceeding to open up a school.

In order to portray this new storyline, the film alternates between following the March sisters through adult life along with a series of flashbacks to their joyous childhood. This change in how the story is presented allows the viewer to experience the March sisters in all their glory while watching them develop their personalities and motivations.

Initially, this directorial choice felt forced, but as the film progressed, the choice became a tool to advance the storyline and emphasize important themes and arguments about economic status, feminism, and society. Because the girls view their childhood through rose-tinted glasses as they mourn the loss of their childhood, Gerwig cleverly added literal rosy tints to the flashback scenes and a dull sepia tone to the scenes of adult life.

The phenomenal range of talent showcased in this film truly did justice to the book. Saoirse Ronan brought the iconic Jo March to life with the perfect blend of wit, bluntness, and bravery. Emma Watson portrayed Meg March, the eldest and most beautiful March sister who struggles with poverty as an adult because of her decision to marry the man she loved despite his lack of wealth. Personally, I would have loved to see more of Meg’s story in the movie, as it was such a moving part of the book, but I understand the constraints of adapting a 700-page novel into a two-hour movie. In the book, Beth March recovered from scarlet fever and lived to be an adult, but in the movie, Beth March passed away due to her illness. Beth’s final days with Jo were incredibly heartbreaking and her ultimate death moved many in the audience to tears, including me.

But, the most incredible part of this new movie for me was Florence Pugh’s performance as Amy March. When I read the book for the first time, I was an avid fan of the dynamic between Jo and Laurie, so I was understandably heartbroken when Laurie and Amy, whom I saw as a whiny brat, got married. However, in this movie, Pugh portrayed Amy as a fun, ambitious woman who had to live in the shadow of her sister. Not only did this transform my opinion of Amy March, but it also cemented my opinion of the film as a groundbreaking interpretation and my favorite adaptation so far.

The film managed to recreate the original lighthearted camaraderie and strong bonds of sisterhood that defined the March sisters while furthering messages about society and life in the 19th century.  For those like me, who have experienced Little Women multiple times, whether it be on the silver screen or ink-laden pages, this movie is just faithful enough to the originals to satisfy fans, while also implementing thoughtful changes that are consistent with Alcott’s original intentions. For those who are experiencing the March sisters for the first time, this film has captured the wonder of Little Women and the endearing characters that make Little Women iconic.

Be the first to comment on "Little Women Review: A Remake That Lives Up To Its Legacy"