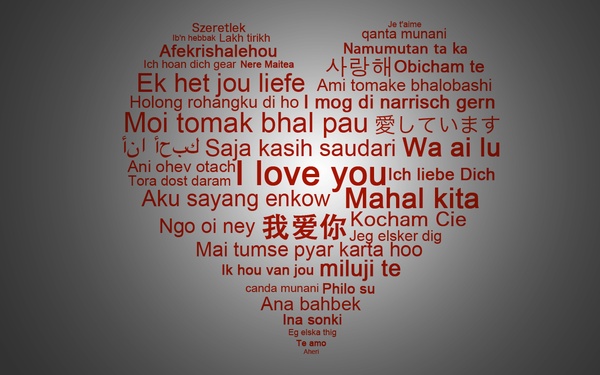 "I Love You" in different languages. | Source: Kendrah Ling

As many of you know Valentine’s day is Friday, February 14th, which means that many people in the U.S are buying cards, candy, and gifts for a special person, whether that be their significant other, friend or family member. For those with romantic partners, it is a day to give each other flowers, spend time with one another, and sometimes share a meal. These celebrations are common across the world as well, but there are still many differences in Valentine’s Day.

In South Korea, there are two days the couples can celebrate their love for each other: Valentine’s Day and White Day. On Valentine’s day, women traditionally give chocolate to men in the form of simple boxes for coworkers and friends and more elaborate gifts to their romantic interests in hopes of getting their affection reciprocated on March 14th, or White Day. On White day, men usually return their love with white gifts, such as white chocolate, cookies, marshmallows, and even gift jewelry. Finally, for those who didn’t receive gifts, there is Black day on April 14th, where individuals gather to eat jajangmyeon, black noodles. On the other 9 months of the year, there is usually a day on the 14th to express smaller ways of love.

Instead of celebrating Valentine’s Day on February 14th, those in Wales celebrate St. Dwynwen’s Day, who is the patron saint of love in Wales. St. Dwynwen, who was unsuccessful with love, prays to remain unmarried, but also for the protection of true lovers. This day is celebrated by exchanging cards and other gifts such as a lovespoon. A lovespoon is a wooden spoon that is intricately carved and decorated with love symbols, such as hearts.

El Día del Amor y la Amistad, meaning day of friendship and love,  s celebrated on February 14th in Mexico. Instead of focusing on romantic relationships on this day, there is an emphasis on celebrating friendships, as it is common to also gift your close friends. Around the end of January, there is a change in the atmosphere as shops and streets are decorated with heart-shaped balloons, flowers, and gifts for sale. Many couples and friends gather to have dinner and spend time with each other.

In China, people celebrate the Qixi Festival on the 7th day of the 7th Lunar month. The festival originates from the legend of an ox-herder, or Niúláng’s, prohibited marriage to a fairy or Zhínǚ, who became a weaver woman. After being taken back to heaven by her mother, the couple was separated by a river of stars, magpies create a bridge for them to reunite once every year.  In most cities, couples give chocolate and gifts to their loved ones instead of practicing traditional customs like praying to Zhínǚ, showing off sewing and weaving skills, honoring oxen, and eating pastries of different shapes, called skill pastries.

These are only a few of the many different customs to celebrate different relationships with one another. With that in mind, what are the ways that you plan on celebrating Valentine’s day with your friends, family, and loved ones? Have a happy Valentine’s Day!

Mok05: Where to Draw the Line