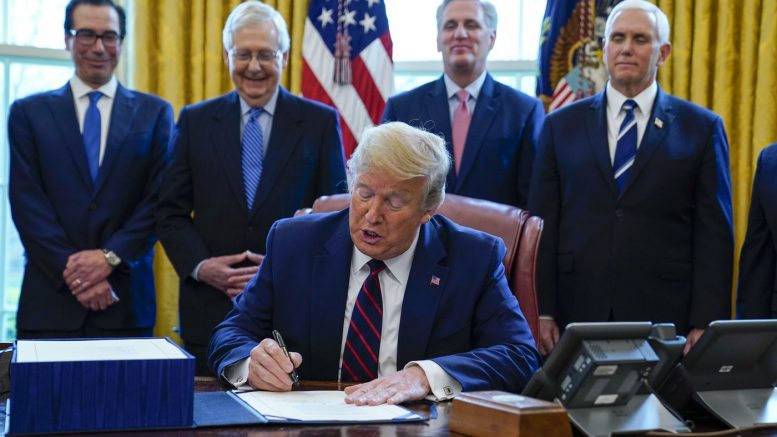 The following article has been adapted from a reflection for the class US Government and Constitution, responding to the new federal strategy of mitigating economic slowdown and the financial opportunism this had led to within the relief program.

The front response of the United States Federal Government on the economic impact of the COVID-19 crisis stands out in the history of disaster relief policy as an example of political collaboration. In its wide application, the response opens the door for public and private interest groups to capitalize on politicians’ desire to pass measures with urgency and accomplish partisan goals. With such a grand sum up for grabs, as outlined in the Chicago Tribune article published after the proposal was finalized,  industrial players most affected by loss in sales revenue (real estate, travel, restaurants) as well as those with employees most at risk (health sector, federal employees) are jostling for the loans, grants, payment deferrals, and benefits that the government provides as economic stimulation during this pandemic.

As described in the textbook for US Gov., using the framework of a Constitutional author, interest groups in the United States represent a form of the ideological faction whose active engagement with the political process is defended by the unique rights and liberties of the American Constitution and encouraged by our party system. The Politico article used to make this reflection provides an example of the disproportionate representation of these interest groups. In a crisis, the most urgent, most dire needs are overshadowed by groups with profitable businesses and well-connected constituents. Although there are numerous examples of American legislation designed to protect public goods, such as Medicare/Medicaid, Social Security, and environmental protection acts, which limits the influence of interest groups seeking particularized benefits, this ascendant health crisis exposes the weaknesses of our mostly privatized industries of governmental concern, ie., health, travel, and finance. According to a New York Times article on the health blitz, as private hospitals and health professionals deal with revenue loss and supply shortages in the wake of increased patients, they are looking to the federal government to mitigate the consequences of our overly-complex health care system which leaves millions of Americans under or uninsured.

Comparing the needs of this overextended, cash-strapped field with the opportunism of other industries in receiving aid in response to decreased efficiencies and maintained costs, it can be difficult to sympathize with interest groups whose concerns may not yield life or death situations. That being said, the importance of groups like the International Franchise Association to small businesses and the millions of employees they maintain could not be overstated as many have faced limited hours of operation and stagnant payroll costs. Thereby, while it is easy to liken industrial appeals for relief to the big business bailouts brought on in 2008, interest groups currently vying for support are intentionally or otherwise helping limit the spread of Covid-19 in addition to economic stagnation. While it may be frustrating to see politicians and business leaders use the momentum of this crisis to their personal gain, the success of the economy will inversely correlate with the spread of the virus. As long as we take proper precautions and handle funds efficiently, the subsidence of the crisis will be the ultimate success for interest groups within our current political process.