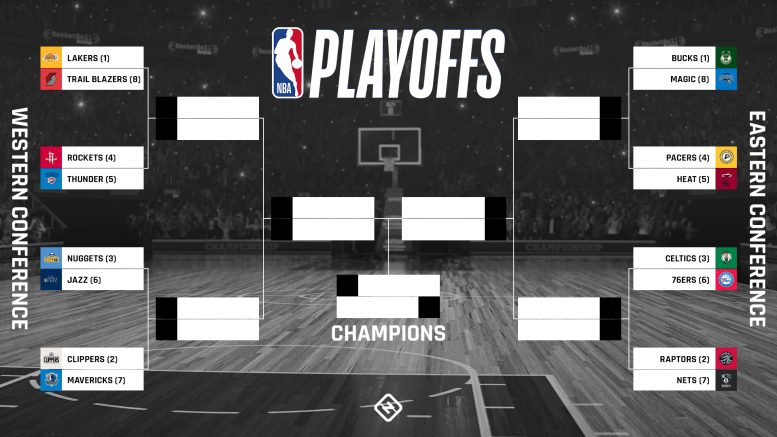 The 2020 season of the NBA has been reshaped by the coronavirus pandemic, making winning the Bubble Championship a truly once in a lifetime opportunity for teams. Given this, teams are pouring their effort into maintaining the same quality of play in a completely different environment of empty stadiums. Although there are 16 teams in the playoffs, most of them are not believed to be title-contenders. Therefore, I have compiled a set of predictions for the course of the playoffs:

This was to be expected. The Bucks have the reigning MVP and are one of the powerhouses of the East. They have few weaknesses, and the Magic do not play to these weaknesses.

Expected. The Lakers are another title contender and while the Blazers had a great run to the playoffs this year, they do not match up well against the Lakers.

The Heat are another title contender given their strong depth and defense. The Pacers had a great bubble run, but they lack a consistent scorer (not TJ Warren).

Donovan Mitchell has been showing consistent scoring ability and has shown that the Jazz are a great team. The Nuggets are starting to play well, especially in the recent games, but it may be too late.

The 76ers were already playing without Ben Simmons, along with having two overpaid players in Al Horford and Tobias Harris. The Celtics, however, have strong depth and are one of the title contenders.

The Clippers have started getting into their groove, and with Porzingis injured, the Clippers are on their way to the next round.

The Raptors are the better team.

I think that Giannis will put up a good fight, but the Heat will edge out in the end with their depth.

I think that the Celtics will edge out the Raptors, only due to chance. I think that this series could go either way, and it should be interesting to watch.

The long-awaited rematch of these two franchises…

I believe that the Lakers will edge out the Clippers, only because of playoff LeBron. The teams are quite close in terms of a matchup and while Kawhi Leonard is a very efficient player, LeBron plays like a completely different player in the playoffs.

The Heat, to me, is a better, more efficient version of the Celtics. As mentioned previously, the Heat have one of the deepest benches of any teams in the NBA currently. I predict that the Heat will wear down the Celtics as they would most teams.

I think that the Lakers will put up a good fight, only to come up short. The Heat have way too much depth, and will slowly wear down the Lakers.

The Pandemic and College Applications