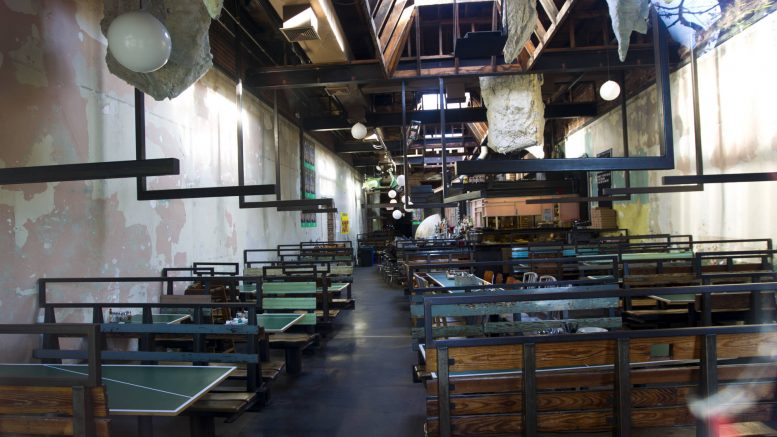 Comet Ping Pong, a pizzeria, was the site of a QAnon-fueled shooting. Fortunately, no one was hurt (AP Photo/Jose Luis Magana)

Comet Ping Pong is a popular restaurant located in the northwestern portion of Washington D.C. It is known for its pizzas, wings, and ping-pong tables located at the backside of the restaurant. Yet, echoes of the restaurant’s history ring not of the bustling noises of a busy service, nor is it the tinkering of ping-pong balls on tables. Instead, they ring of three, piercing gunshots with bullet shells clanging on the cold floor. No one was injured, but the peace and quiet of the community were shattered and deep scars were carved into the conscience of many.

In 2020, two men met up with a leader of a local militia group outside of a political rally in Lansing, Michigan. After exchanging contact information, both parties decided to meet up regularly to participate in joint training sessions for their mutual goal. Months of training, numerous Facebook messages, and an FBI operation later, it was revealed that the group targeted Michigan Governor Gretchen Whitmer and other high-ranking Democrats and was preparing for abductions, bombings, and potential killing. While the kidnapping attempt was foiled, millions worried that their leaders’ personal securities were in jeopardy, raising alarms as to whether similar violent, politically-motivated acts would spring up.

On January 6th, 2021, Congress hosted a joint session to certify the results of the 2020 US Presidential Election in a largely-ceremonial process. As senators and representatives gathered to declare Joe Biden the new president, thousands gathered outside the US Capitol in support of a long-debunked narrative of election fraud. The collective frustration of ardent supporters of then-President Trump’s narrative erupted in the face of the Capitol Police. Windows were smashed, offices were looted, and the holiest temple of American democracy was desecrated. As the smoke cleared, one policeman and four rioters lay dead, as did the illusion of political peace throughout the nation.

All three cases seemed like far-fetched, bizarre instances of attempted violence that bear no clear connections with one another. Yet, upon closer inspection, a single thread weaves its way through the events: digital disinformation. As social media has paved the way for an unprecedented age of sharing information, lies and conspiracy theories have disseminated at historic paces as well, sweeping across to the very fringes of the Internet.

In the case of Comet Ping Pong, QAnon conspiracy theories led shooter Edgar Welch to believe that Democrats were running a child sex ring in conjunction with global elites under the guise of a pizzeria. Others, such as the plot against Governor Whitmer and the Capitol riots, were the products of false claims depicting President Trump as a martyr liberating the U.S. from an authoritarian Democratic government.

In a complete vacuum, the three events are merely accidents. Yet, the underlying causes are far more sinister and have caused serious, widespread devastation. Misinformation has not just terrorized an individual politician, a pizza shop, or caused the death of just one police officer. Instead, the true effects remain hidden away from plain sight.

What remained hidden from plain sight was how James Alefantis, owner of Comet Ping Pong, saw the days leading up to the shooting as especially tormenting. “Messages and comments poured in, [and] many of the messages were violent and gory…I started getting calls from friends, family, and customers who said they were getting harassed online as well.” What remained hidden from plain sight was how the Capitol insurrections also saw over 140 policemen face injuries in addition to the death of Officer Brian Sicknick at the hands of violent mobs. What remained hidden from plain sight were the individuals, families, businesses, and communities that were torn to bits by division and hate. Disinformation has the power to not only transform opinions, but also puncture and even destroy the very social fabric of entire societies.

It should be clear by now that disinformation has extended far beyond the confines of just three attacks. Some conspiracy theories are seemingly more benign, such as flat Earthers, whereas others seem too ridiculous to be taken seriously, such as ovarian cysts being the byproduct of having intercourse with demons. The question, then, becomes why. Why is it that so many people have fallen into the endless sinkhole of lies? Why is it that there remains so much hate within America and beyond?

It is one problem for the conspiracy theory to merely exist, but it is another for people to latch onto falsehoods in moments of desperation. Indeed, general instability is a culprit of such evil deeds. Dr. Sander van der Linden, a professor of social psychology at the University of Cambridge, claims that this “kind of boom in conspiracies [emerges] whenever there’s political or social unrest throughout history, whenever there is significant uncertainty in the world.” As the pandemic rages on throughout the world and racial and socioeconomic tensions have risen in America, it is certainly understandable how current social upheaval creates uncertainty in the world, giving way for misinformation to spread.

Dr. Karen Douglas from the University of Kent further elaborates that there are three main motives behind the acceptance of conspiracies: first, the need for knowledge and clarity; second, the need for security; and lastly, the need for moral supremacy. People are seeking to find answers to complicated, often unanswerable questions that make them feel better about themselves. As a result, misinformation can spread like wildfire, burning down pillars of hope in the process.

The Internet further compounds the crisis of falsehoods and creates new avenues to propagate lies. As social media and digital culture provide new spaces for instantaneous communication, conspiracy theorists seize the opportunity to increase their audience and grab the spotlight. Since anyone could release essentially anything into the world, the Internet has enabled uniquely digital cultural phenomena such as QAnon to exist. As desperate individuals are able to find common ground with other disgruntled believers of disinformation, they, too, will succumb to the poison of shams.

YouTube, along with other companies such as Google and Facebook, have come under fire for their respective roles in providing the platforms for conspiracists to speak out. Generally, digital companies track and promote content based on their popularity and not necessarily their truthfulness. As a result, popular content concerning topics such as anti-vaxxers and white supremacy can even benefit from the algorithms set in place to filter information.

In an ideal world, information and truth will inevitably triumph over the lies and wrongs and help lead humanity into a better future. However, we are imperfect. We cannot merely let loose the reins of disinformation, as it will quickly snowball into something far more catastrophic. We have seen this crisis time and time again over the past few years, and the same will continue into the foreseeable future as falsehoods continue to roam free on digital platforms.

It becomes easy to be discouraged and pessimistic at the hands of failure. But consider this: we also have the power to change our destiny. Alefantis, the owner of Comet Ping Pong, describes how the community within Washington D.C. came together in solidarity with the pizzeria following the attack. Piece by piece, customer by customer, the restaurant slowly got back on its feet, returning to its original state of being as a welcoming haven for hungry passersby. His story is a reminder of how disinformation in a digital age is lethal, and at the same time, it is conquerable. Perhaps one day, our world would heal and reject the hurtful fallacies that it once contained. Until then, there is work to be done, and everyone is obligated to fight for the good.

Oliver Ni is a senior from Bolingbrook and lives in 05C. He is the co-Editor-in-Chief for The Acronym and is stoked to find another reason to put off schoolwork. Outside of The Acronym, he can be found frantically running to catch a club meeting, binge watching YouTube videos, or being extremely frustrated with the Cubs.

Be the first to comment on "Pizza Shops and QAnon: Disinformation in a Digital Age"