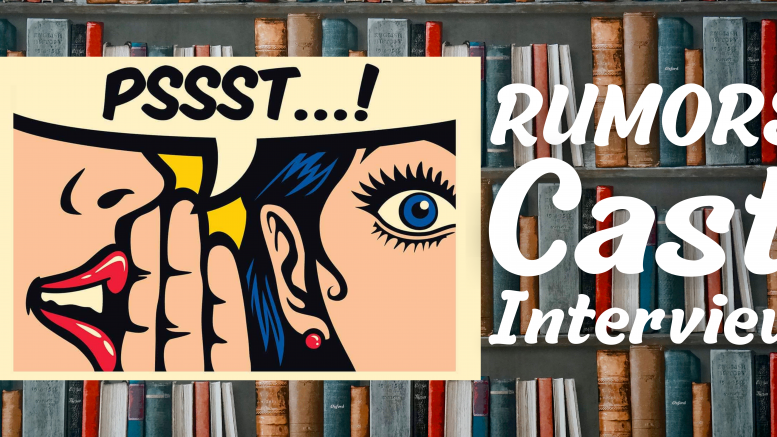 On November the 5th, IMSA’s Drama Club held their first showing of the play Rumors, a two-act farce by Neil Simon. In the play, the couple, Ken and Chris Gorman, are the first to arrive at their close friend’s ten-year-anniversary dinner party. Things take an unexpected turn when they discover that their host, Charlie Brock, unsuccessfully attempted suicide. His wife, Myra Brock, and the help are nowhere to be seen! After vain attempts at keeping a cheery facade toward the other party guests, a series of confusing phone calls, and a visit from the New York State Police, the play ends in a cliffhanger, leaving the audience craving for more.

Despite the heavy subject matter, the play keeps a comedic air with its hilarious side plots, involving scandalous affairs, immature bickering, and motifs that are to die for (pun intended). In an interview, the cast details their most memorable moments throughout the play, exclusive behind-the-scenes knowledge, and more!

The cast of Rumors, made up of nine of IMSA’s most talented student actors, had quite a diverse response in regards to their favorite theatrical shows.

“Oh, I’m a sucker for Falsettos,” said Em Johnson, president of the IMSA Drama Club and actor behind Cookie Cusack.

But, by far, the most surprising response came from Zoe Barajaz, whose favorite play was Crucible. “I don’t know,” she said with a laugh, “it was the first play I watched, which was probably not the best choice considering I was pretty young!”

When asked to describe the play in a few words, the cast decided on “chaos in comedy.”

“If we had to specify I think we would all agree that there was a lot of ‘noise’ and physical comedy throughout the play,” said J.P. Vrooman who played Ken Gorman. This “physical comedy” was heavily prevalent throughout the play, with characters having whiplash from car crashes or loss of hearing due to gunshots. At one point in the play, Johnson can be seen crawling across the living room because of her back pain. Despite the funny banter and quick-witted comebacks throughout the play, what was presented on show night was not a replica of the original play.

“There was a lot of icky language in the original script,” explained Johnson. “Mostly it was racist language centered around the cook, Mylie.” Together the cast worked to correct the offensive language throughout the piece, while maintaining the integrity of the storyline, and had a perfect show night… well… almost perfect.

“Oh my gosh the door!” exclaimed Katherine Jones, who played Chris Gorman in the play, when asked about any hiccups in the show. “The front door leading into the living room was always so hard to open! And even during our last rehearsal, the door had almost fallen over because of how hard we had to pull on it!” The door was so hard to open, in fact, that on opening night actor Mira Clemmons, who played Claire Ganz, had to receive some improvised assistance from Jones to open it. “I was just sitting there watching Mira trying to open the door, it was so nerve-wracking!”

The last few minutes before their legendary performance, the cast were not frantically calming themselves because of nerves, but because of makeup! “Backstage makeup was such a good time.” Kaz Isuibe explained, who played Officer Welch. Isuibe described her personal strife when trying to set the correct foundation to match her skin tone, yet their end result ended up looking like a “ghost.” Christian Delgado, who played Lenny, needed help during the final stressful minutes before the premiere from his castmates because of an…incorrect palette choice, “The foundation I used was so yellow, I looked like a Simpson!”

Despite all obstacles, the cast succeeded in putting on three incredible performances. It can be said, without a doubt, that the cast of Rumors includes some of the most talented actors in our school. We cannot wait for their upcoming winter production!

Behind the Scenes of “Noises Off”: Drama Club’s Upcoming Production

Be the first to comment on "BTS of Drama Club’s First Play of the Year! Rumors Cast Interview"