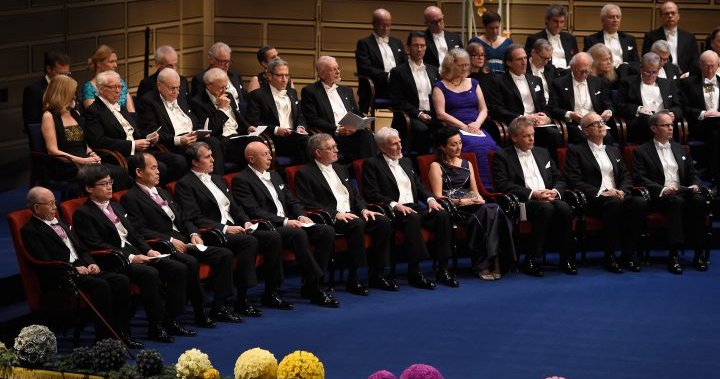 The mostly white men laureates of the Nobel Prize 2014 are seen on stage at the Nobel Prize Awards Ceremony at Concert Hall in December in Stockholm, Sweden. | Global News

This year’s Nobel Prize in physiology or medicine, physics, and chemistry all went to men, reflecting a longstanding absence of diversity in one of science’s most prestigious prizes.

A total of 25 of the 757 Nobel Prizes awarded in the sciences or economics have gone to women with three out of eight of the science laureates being women last year.  No black scientist has ever won a Nobel Prize in any science, and there has only ever been one black recipient for the economics prize — W. Arthur Lewis in 1979.

“This is a problem much larger than simply bias on the part of the Nobel selection committees — it’s systemic,” chemist and professor at Connecticut College Marc Zimmer wrote in an article last year.

Although the lack of diversity within the Nobel prizes has always been a topic of discussion, Imogen Coe, a biologist at Ryerson University in Toronto, Canada, says that this year feels different. The tone of criticism has changed and the issue has become more mainstream with more men weighing in, she says.

Göran Hansson, the secretary-general of the Royal Swedish Academy of Sciences in Stockholm, which awards the science Nobels, says that the prize-selection committee is taking steps to be more inclusive. Hansson says that they are asking more women to nominate laureates, although the Royal Swedish Academy of Sciences, though, reports that women nominators so far are no more likely to nominate women than men nominators are.

In a 2019 interview with Nature, Hansson explained that the committee asked nominators to consider the diversity of gender, geography, and topic when proposing candidates. There’s also a glaring lack of racial diversity among Nobel laureates. “The fact that white men are so radically over-represented among Nobel prizewinners in science tells us in no uncertain terms that we, as a society, are missing out on a whole range of new ideas and discoveries that depend on a diversity of ideas and backgrounds,” Kelsey Johnson, an astronomer at the University of Virginia in Charlottesville, said.

So what’s keeping women and minorities from winning Nobel prizes?

Historically, STEM fields are largely dominated by white men. In fact, less than 30% of the world’s researchers are women, according to UNESCO. Although colleges and universities in America boast increasingly diverse faculties, there are still systemic barriers that prevent women and minorities from climbing the ladder within higher education. Few tenure-track positions are filled by women and minorities, which denies them the job security that would give them more freedom, status, and time to pursue academic research that would advance their careers.

These advancements are important for Nobel Prizes, though. The awards are typically granted to full professors at prestigious institutions. Many critics think that this unofficial requirement makes the selection process too narrow. “We need to think broadly about what it means to have a significant scholarly impact,” Kimberly Griffin, an associate professor at the University of Maryland and the editor of the Journal of Diversity in Higher Education said.

Griffin explained that women and people of color tend to conduct research projects that directly relate to specific communities, something that the scientists that are currently being acknowledged tend not to do. She goes on to say that this work can be more transformative than general scientific advances.

Although that may be true, it is not an excuse. Many women worked in STEM two decades ago. Two decades ago was 2001 — of course there were women in STEM. More to the point, there was a lack of recognition for these women, and that is why they are not getting the recognition they deserve. Many of the women in STEM who have gone unrecognized are being documented through the Beyond Curie project.

“Even with the increasing numbers of women going into science today, it will take time before the pool of female Nobel Prize candidates is on par with males,” Hansson said.

Although the number of women science winners is slowly but surely increasing, the diversity problem is even worse when it comes to race.

“The problems start right at the beginning in economic, schooling, bias,” Zimmer told CNN. “I think the problem really with the lack of racial diversity is not a problem of the Nobel awards, rather that’s more a societal systemic problem.” It goes beyond the sciences as well, as Zimmer has acknowledged.

Founder of the Nobel Prize Alfred Nobel wrote in his will that it was his “express wish that when awarding the prizes, no consideration be given to nationality.” With that in mind, the vast majority of the literature laureates wrote in English.

“I think that what matters is who is nominating, and who’s in the room,” Patricia Matthew, an associate professor of English at Montclair State University, who has written about racial diversity in higher education and popular culture, explained. “I also think part of the challenge is not understanding or appreciating the impact of the work that Black, African, people of African descent, the impact of their work globally.”

Matthew said that although she thought that Louis Glück, the American poet who was awarded the Nobel Prize in literature in 2020, was “phenomenal,” she thinks the world would be improved if Black writers such as Sonia Sanchez, Amiria Baraka, or Rita Dove were to receive global recognition.

Hansson also shared the concern “about the shortage of women and of scientists from outside Europe and North America among Nobel laureates.” He explained that the Nobel committee had made “substantial efforts to approach research universities across the world” but that “the inequitable distribution of Nobel prizes is a symptom of a bigger problem” with science being dominated by Western Europe and Northern America. He even went so far as to point out that fewer than 15 percent of senior authors in Nature are women and only 2 percent of all total authors were from Africa, South America, or western Asia.

Although that’s a fair and reasonable statistic on Hansson’s part, the reason that there’s such a low percentage of women and minorities as authors in Nature is because of systemic racism and sexism within America’s education system. It starts as early as preschool, and it follows Black students all the way to higher education. Black students face higher rates of school disciplinary consequences and are subject to more interactions with police in schools through contraband sweeps, interrogations, physical restraints, and unnecessary arrests, all of which interrupts their schooling often. A study from 2019 also found that teachers rate Black students’ academic abilities lower than white students’ identical academic abilities.

Furthermore, Black students tend to receive lower scores on standardized math and English tests than most other groups and are heavily underrepresented in advanced courses. There’s also a major lack of Black educators, causing an uneasy feeling among Black students that affects their test scores. Read more about it at The Seattle Times.

Hansson’s argument seems inconsequential once having looked at the overwhelming evidence that shows the evident racism that clings to the American education system. This racism in the education system follows Black children up to higher education and further, all the way to their Ph.D. and further. It prevents them from getting the recognition they deserve, like Nobel Prizes.

“The prizes should reflect the world that we live in now,” Matthew says.