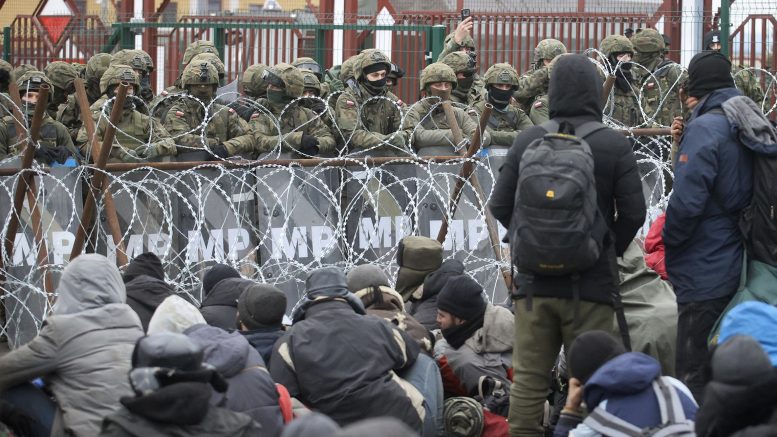 In the past month, an increasing number of migrants have been gathering in the Białowieża Forest along the Poland-Belarus border in an attempt to enter the European Union (E.U.). The migrants have been camping on the two-mile stretch of land between the two countries, barred from Poland and threatened with violence from Belarus if they turn back. They often sleep in wet sleeping bags and are without shoes, as these were ruined during the hike they were encouraged to take through Belarus’ swamps.

The crisis began in early July 2021. After president Alexander Lukashenko threatened to allow human traffickers and drug smugglers into the E.U., Belarus ceased to police its border and began to use asylum-seeking immigrants as a means of pressuring the bloc. These migrants came from countries including Yemen, Syria, and Iraq, with Belarus providing tourist visas and “inviting” them to the country with advertisements.

This initial influx of migrants followed two sets of sanctions imposed against Belarus by the E.U. and non-member countries. The first came as a response to Lukashenko’s 2020 election to a sixth term as president. Lukashenko had at that point been in office 26 years and was, as he is now, widely seen as having kept his hold on power fraudulently. After the election, anti-government protestors held demonstrations only to be violently restrained by Belarusian forces, prompting the E.U. to announce sanctions against Belarus “for violence and falsification.”

Sanctions were imposed for the second time after Belarus forced the landing of an international Ryanair flight in May 2021. Air traffic control conveyed false bomb threats to ground the plane, on which Roman Protasevich, an exiled Belarusian blogger and activist, was a passenger. Upon arrival in the capital city, Minsk, Protasevich was then taken into custody by Belarusian police.

The Belarusian sprinter Krystsina Tsimanouskaya was granted asylum in the E.U. after the 2021 Olympics, another motivation for Belarus to blackmail the bloc. Tsimanouskaya had made an Instagram post criticizing Belarus Olympic Committee officials, saying they had entered her in an event she had never before contested. Attempts were made to return her to Belarus by force, but after expressing fear of returning to the country, she was granted a humanitarian visa to Poland.

A few months later in September, as migrants continued to arrive at the border, Poland passed an emergency act forbidding all non-residents, including aid workers, medics, and journalists, from entering the stretch of forest separating the country from Belarus. Given the act’s effects on communication between the migrants and the rest of Poland, there remains little non-government information about the migrants’ situation; still, Grupa Granica, a Polish network of 14 NGOs aiming to help migrants, told Time the nine migrant deaths recorded by Polish officials is significantly lower than the reality.

Poland also reports that there are no migrants stranded on the Polish side of the border. “If we identify that someone is legally on our territory,” said Pawel Jablonski, Poland’s Deputy Foreign Minister, to Time, “ we transport them to detention centers and process them according to Polish law.” Anna Alboth, a member of Grupa Granica, labeled this false too: “almost nobody” is taken to a detention center unless “we activists make a big noise around a case, invite the international media and apply to the European court.” Polish volunteers continue to help as best they are able, delivering food and clothes to migrants despite the emergency act, but only in the dark, without flashlights, as they must avoid the attention of the Polish border guards.

October and November have seen the situation at the border become even more pressing, with Belarus continuing to encourage migrants to make the hike to the Białowieża, and in increasing numbers, despite winter temperatures. As opposed to 120 in all of 2020, Poland has recorded 24,000 attempted crossings from Belarus this year, with more than half of these occurring in October. In response to the surge in migrants, the country has erected and reinforced a border wall. But the wall has not stopped interactions from turning violent: it was only this week that Polish forces at Kuznica-Brugzi crossing took to using water cannons and tear gas to deter stone-throwing migrants.

The E.U. has accused Lukashenko of manipulating the migrants as a part of a “hybrid attack” against the bloc. Lukashenko denies having orchestrated the crisis, but asked if Belarus was helping migrants cross the border, he told the BBC: “I think that’s absolutely possible. We’re Slavs. We have hearts. Our troops know the migrants are going to Germany. Maybe someone helped them. I won’t even look into this.”

Beyond seeking revenge for the sanctions imposed on Belarus, it has been speculated that the diplomatically isolated Lukashenko is looking to use the migrants to call attention to his country. “His key aim is to restore contact with European leaders,” Maxim Samorukov, a fellow at the Carnegie Moscow Center, told NPR. On this front, Lukashenko has met with some success. Outgoing German Chancellor Angela Merkel discussed the border situation with Lukashenko Monday. The leaders agreed that something needs to be done for the migrants, but according to Deutsche Welle, Lukashenko said he and Merkel were of different opinions on how the migrants had gotten to the border in the first place.

About the crisis at the border, Merkel also spoke to Russian President Vladimir Putin, asking him to intervene. Belarus retains close ties with Russia despite its estrangement from the E.U. During the protests over the 2020 election, it was Russia that gave Lukashenko’s regime the financial and political support it needed to carry on. The relationship between the countries is such that, though the Kremlin denied the accusation, Polish Prime Minister Mateusz Morawiecki recently claimed Putin to be the “mastermind” behind the border crisis itself. But regardless of its role in the orchestration of the situation in the Białowieża, Russia has said Belarusian guards are treating migrants “very responsibly,” going so far as to offer earlier this week to act as “mediator” in resolving relations between the E.U. and Belarus.

On November 15th, the E.U. imposed a third round of sanctions on Belarus, targeting “everyone involved” in pushing migrants toward the bloc, according to the bloc’s foreign policy chief, Josep Borrell. But some political analysts say the E.U. would do better to target Belarus through Russia, which is currently not affected by the sanctions. As Artyom Shraibman, a political analyst at the Carnegie Moscow Center, told Time, the current sanctions will not be much of a punishment for Belarus so long as the country is backed by Russia. Shraibman suggests placing sanctions on Russia directly to make it “increasingly costly and risky for Moscow to support Lukashenko.”

Another consideration for the E.U. in terms of sanctions is a more recent threat of Lukashenko’s: to cut gas supplies in Europe. The owner of the gas, however, is Russian, and while Russia largely supports Belarus, the Kremlin has said that it had no part in the making of this threat, and further, that Russia does not want to see gas supplies disrupted.

Aside from sanctions, efforts have been made to quell the influx of migrants into Belarus. The E.U. made a deal with Turkish authorities on November 12th, with Turkey agreeing to stop the Belarusian airline Belavia from allowing citizens of Iraq, Syria, and Yemen to board flights to Belarus. Iraqi Airways has halted flights to Minsk as well.

At the border itself, Polish authorities continue to prohibit contact between migrants and aid workers, journalists, and medics. But on Thursday, a day after migrants’ stone-throwing was answered with tear gas and water cannons by Polish forces, Polish Deputy Interior Minister Maciej Wasik received information that Belarusian authorities were transporting migrants from the border via bus, while the Belarus state news agency, Belta, reported their transfer to a heated warehouse nearby. Belta said also that the migrants were offered food, water, medical aid, mattresses, and pillows upon arrival.

Some migrants opted to stay at the border, while others of those in the warehouse were quoted by Belta as having no plans to return home. Miran Ali, an Iraqi Kurd taking shelter in the warehouse, recorded a video in which he can be heard saying: “This is the joy and happiness of the Kurdish people after they were told that they will not be sent back to Kurdistan by force and that they can wait here until Germany or one of the cities in Germany takes them there… These people are expressing happiness and optimism in this cold and ugly camp.”

Later on Thursday, a repatriation flight departed Belarus for Iraq for the first time in months, carrying some of the Iraqi migrants who had been trapped at the border. But by Thursday evening, according to Polish Border Guard spokesperson Anna Michalska, Belarus had already resumed its transportation of migrants to the forest, having them attempt to enter Poland while it was dark. “[The Belarusians] were bringing more migrants to the place where there was a forced attempt to cross,” Michalska reported. “At the beginning, there were 100 people, but then the Belarusian side brought more people in trucks. Then there were 500 people.”

As migrants made to enter Poland, Belarusian troops blinded Polish guards with lasers. Some migrants threw logs as well. This comes amid reports from Polish defense minister Mariusz Błaszczak that Belarus has switched tactics in directing migrants. “Now a bit of a new method has been taken on by the migrants and Belarusian services… Smaller groups of people are trying to cross the border in many places.” He went on to say there is currently no apparent end to the crisis in sight: “We have to prepare for the fact that this problem will continue for months. I have no doubt that that will be the case.”

Be the first to comment on "Belarus-Poland Border Crisis Continues, No End Evident"