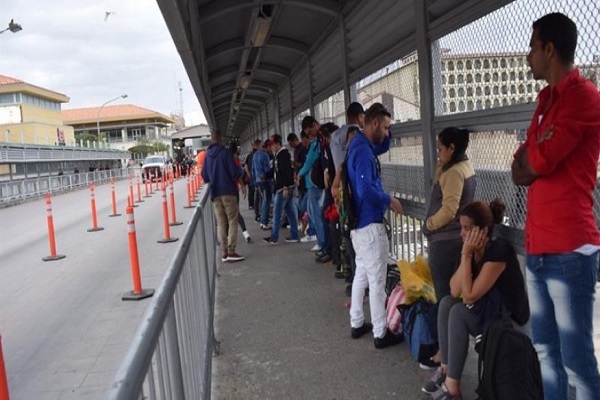 NUEVO LAREDO, Mexico – On January 12th, now former President Barack Obama ended the “Wet foot, dry foot” policy that had allowed special immigration for Cubans without visas into the United States. As a result, more than 1000 Cubans who had left Cuba before the change in policy are now stuck along the Mexico – United States border, hoping that they will be allowed to enter the United States.

“Everybody was racing to get here before the inauguration on the 20th,” said Yamila Gonzalez Cabeza, a teacher from Cuba now stranded in Nuevo Laredo. She and many others thought that the Trump administration would close off the borders. “The reverse was true. We did not expect this surprise on the 12th.”

Marleni Barbier remains optimistic. A former dental assistant, she sold everything she owned and fled to Cuba, arriving to the Mexico-U.S. border after a six-month long journey, only to find out that the law had changed a few hours before. “I have faith that Trump will change it,” she said.

But as of now, there is no indication yet from the Trump administration of any action on this situation.

“I certainly have sympathy for them,” said Henry Cellar, a Democratic Representative from Texas, “But the policy has been changed, and the moment they changed it, the policy was eliminated.”

For most, returning to Cuba is simply just not an option.

“First of all, if I’m deported I will probably have to serve two months in jail,” said Yenier Echevarria Gonzalez, a former baker. “And I will never again have a job, a car or a house – ever.”

He is among the many migrants who might might face political problems and persecution if they return to their country. And now, those at Nuevo Laredo can only hope that Trump will show compassion and sympathy for their arduous journey to escape poverty and oppression in Cuba.

Why Haitians Are Seeking Asylum

Be the first to comment on "Cuban Migrants Stopped at Border"