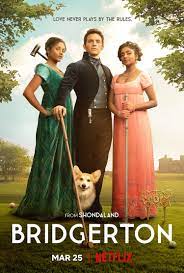 In this season, the focus is on the eldest sibling, Anthony, whose main objective is to separate love from marriage. He sees marriage as a duty for him to continue the Bridgerton bloodline and find an ideal partner. When he meets Edwina Sharma, a charismatic and intelligent young lady, he settles on courting her. However, Edwina’s older sister, Kate Sharma, is able to see through Anthony’s intentions and disapproves of their relationship much to Anthony’s dismay. The two can never see eye-to-eye and often clash with one another. However, their frequent quarrels might bring them closer together than they had expected.

In comparison to season one, I really prefer this season because of how the storyline was executed – specifically the slow burn romance between Anthony and Kate. I’m a sucker for enemies-to-lovers, but I also enjoyed that the show didn’t rush into the shift in the characters’ views toward each other. Additionally, I loved their incorporation of the forbidden love aspect as well, where Anthony is supposed to be courting Edwina, but he ends up falling for the other older sister, Kate. It made the stakes for the characters significantly higher and made watching it play out very swoon-worthy for the viewers. One of my favorite lines from the season was when Anthony acknowledges their messy relationship: “My father raised me to act with honor, but that honor is hanging by a thread that grows more precarious with every moment I spend in your presence.”

One thing I felt the show did lack was emotional connection in the relationship. We are able to see that Anthony can confide in Kate when he becomes distraught from her bee sting, which reminded him of his father’s death. I wished I was able to see a turning point in Kate, as well, in which she realizes that Anthony can emotionally support her. It seems like the show utilizes their screen time more to emphasize the forbidden aspect of the characters’ relationship rather than anything else.

Although Bridgerton mainly captivated its viewers by utilizing familiar love tropes, the show failed to demonstrate an emotional bond between the characters in the main relationship.

Be the first to comment on "Bridgerton Season 2 Review"