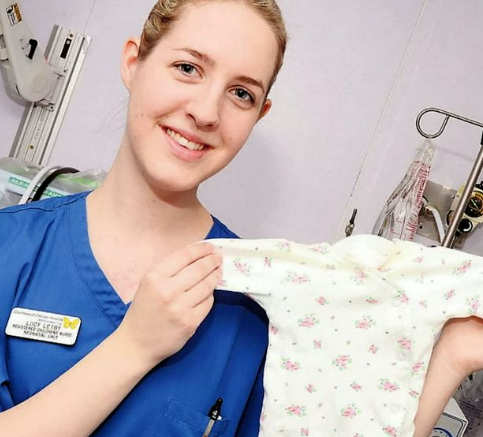 Lucy Letby, a 32-year-old former nurse at the Countess of Chester Hospital in England, is on trial for the alleged murder of seven babies and the alleged attempted murder of 10 other babies in the hospital’s neonatal unit between 2015 and 2016. She denies all 22 charges against her.

Letby graduated from the University of Chester with a degree in nursing and was said to have “a clean record with the Nursing and Midwifery Council and was even the face of a campaign to raise £3m for the unit.”

She worked in the neonatal unit of the Countess of Chester Hospital starting in 2011 and ending in 2018 when she was arrested. Before this, however, an investigation had been launched at the hospital in 2017 after “15 deaths and 17 life-threatening incidents involving babies between June 2015 and June 2016.” This investigation was called for by the hospital after they conducted many independent expert medical reviews about the deaths due to the high mortality rate and found similarities in the deaths of the infants.

Nick Johnson KC, prosecutor in this case, said that consultants thought “that the deaths and life-threatening collapses of these 17 children were not medically explicable,” also noting that the deaths and collapses of these infants “were all the work, we say, of the woman in the dock, who we say was the constant malevolent presence when things took a turn for the worse for these 17 children,” referring to Letby.

One story of Letby’s crimes in particular involves the mother of one of the children Letby allegedly killed, identified as Child E in court, interrupting Letby who was tending to him with concerns about the blood coming out of his mouth. Letby told her that it was due to the stomach tube that was irritating the newborn’s throat, even adding “trust me, I’m a nurse.” Within hours, the newborn was dead. It is alleged that she injected air into his bloodstream and then tried to kill his twin brother, or Child F, the next day by allegedly injecting insulin into his bloodstream. This seems to be a trend in her killings as she has allegedly tried to kill all of her victims by injecting air, milk, or insulin into them.

In June of 2016, Letby was removed from the neonatal ward to do clerical work where she would not have any contact with the infants. 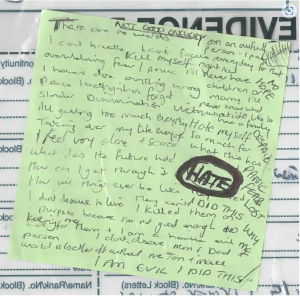 A note shown to the jury that was written by Lucy Letby. | Source: The Guardian

Besides the investigative reports, the prosecution has also brought notes Letby allegedly wrote that were found when her house was searched. These notes say such things as “I don’t deserve to live. I killed them on purpose because I’m not good enough to care for them,” “I am a horrible evil person,” and “I AM EVIL I DID THIS.”

Her defense attorney, Benjamin Myers KC, said the notes were the “anguished outpouring of a young woman in fear and despair when she realises the enormity of what is being said about her and this is her way of expressing it in the moment to herself.” Myers also added that the “note reflects the anguished state of mind Miss Letby found herself in and what she felt when she was learned of how she was accused of killing children she had done her best to care for. What you see there is anguish not guilt.”

The defense argues that there is no evidence that Letby hurt the babies. “There is a real danger that people will simply accept the prosecution theory of guilt and that’s all we have so far, ladies and gentlemen, a theory of guilt based firmly on coincidence — if anything can be based firmly on coincidence,” Myers said noting that the prosecution’s case was “driven by the assumption that someone was doing deliberate harm … combined with the coincidence on certain occasions of Miss Letby’s presence.”

Myers also suggested that the deaths might be explained by failings by the hospital and the care they were providing the babies, saying that there was a “massive failure of care in a busy hospital neonatal unit — far too great to blame on one person” and that there were some newborns that should have been at other hospitals where they could receive care from specialists.

The trial is ongoing and is expected to last six months.

Be the first to comment on "Lucy Letby: The Alleged Baby Murderer"