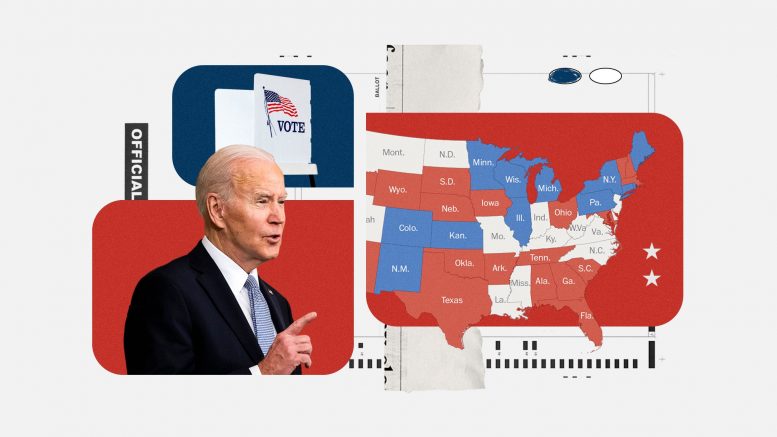 The following image shows a graphic including Joe Biden, a ballot box, and a map of the midterm election results. Source: washingtonpost.com

Coming into the 2022 midterm elections, the political climate for Democrats looked dire. Many political commentators predicted major Republican gains; politicians like Ted Cruz theorized that there would be “not just a red wave, but a red tsunami.” Even though their predictions seem overzealous now, at the time, their confidence was not entirely unwarranted. A multitude of polls favored Republicans to win both the House and Senate. Even centrist polls like FiveThirtyEight had the chances of Republicans winning the Senate as 59 in 100 and the chance of Republicans winning the House as 84 in 100. Joe Biden’s approval rating was also hovering well below 50%.

But on election day, the “red wave” never materialized. Even though many predicted a clean sweep in both the House and Senate, Democrats look to have secured the Senate, and Republicans only narrowly won control of the House. This has left many wondering: what happened to the red wave?

Many have speculated that the overturning of Roe v. Wade by the Supreme Court back in June had a large effect on voters in the midterms. The legalization of abortion remains extremely popular with almost 62% of Americans saying that it should be legal in all or most cases. This was especially notable in Pennsylvania where exit polls showed that abortion remained one of the largest issues for voters.

Another proposed explanation has been candidate quality. Many candidates on the Republican end including Hershel Walker in Georgia and Mehmet Oz in Pennsylvania had little to no political experience before their respective races. This led to a number of controversies that plagued both campaigns. Many candidates endorsed by Trump also campaigned on election denial, which some believe turned off independents and more moderate Republicans from voting for them. Almost all of the Trump-backed candidates lost their races, which has led to speculation that Trump endorsements may have back-fired on the party.

Additionally, young voters seem to have turned out for Democrats. Even though the amount of young voters wasn’t significantly different from previous years, the political leaning of them was much more skewed. Young voters 18–29 only made up around 12% of total voters, but they voted for Democrats by a ratio of 65–35%.

Finally, the issues that Republicans ran on, such as the economy and inflation, didn’t seem to stick with voters. Even though the cost of living and inflation are rising, voters seemed to prioritize other issues over the economy. As pollster Chris Jackson, senior vice president at Ipsos said, “People don’t love the economy, but they’re not getting laid off, which allowed other issues like abortion, like immigration, like the ‘Big Lie’ on the right to instead dominate the closing weeks of the election.”

Through a variety of factors, Democrats achieved a major upset over Republicans. They have already secured 50 seats in the Senate and a runoff in Georgia will soon determine if they can achieve a full majority. On the other hand, Republicans have won a slim majority in the House. These midterm results were unexpected for many and are sure to affect the political climate in the coming two years.

Max Chen is a sophomore at IMSA who lives in 01 D-wing. He is from Champaign and is very excited to serve as a Staff Writer for The Acronym. Outside of writing, he likes to play guitar, tennis, and debate.

Be the first to comment on "What Happened to the “Red Wave” in the 2022 Midterms?"