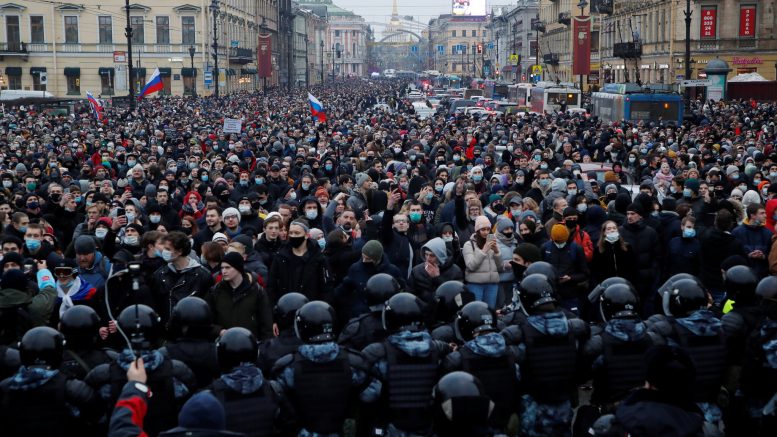 Alexei Navalny is an outspoken critic of President Vladimir Putin and one of the most well-known Russian opposition leaders. He first made international headlines when he was poisoned with a deadly nerve agent, Novichok, in August of 2020. The Kremlin has denied any connection to the poisoning. However, it is not uncommon for critics of the Russian government to face severe punishment. Several dissidents including Pyotr Verzilov, Olya Borisova, Sasha Sofeev have gone missing or been poisoned in recent years. Former Russian spy Sergei Skripal and his daughter were poisoned with Novichok in 2018. Boris Nemtsov, another opposition leader, was assassinated in 2015.

Navalny was poisoned in Eastern Siberia, but has been recovering in Germany for the last five months. After returning to Russia on January 17th, he was taken into custody, where he remains today. Protests have broken out across Russia demanding his release, with tens of thousands of Russians taking to the streets. The government has cracked down and arrested over 3,100 protesters so far.

Navalny criticizes the Russian government for its corruption, describing the ruling political party United Russia as “a party of crooks and thieves.” He has published videos describing the corruption of the Russian government, the embezzlement of state funds, and unfair elections. Most recently, Navalny posted a video on YouTube detailing the construction of a massive palace on the Black Sea for Putin, asserting that state funds have been used to build the personal residence. As protests continue, it is uncertain if Navalny will be released.

NOTE: As of February 2nd, Alexei Navalny has been sentenced to two years and eight months in a penal colony. Officially, he has been charged with the violation of a 2014 suspended sentence he received for embezzlement by not checking in with Russian prison services while in Germany. The European Court of Human Rights has ruled that Navalny’s 2014 sentence was politically motivated and a violation of the European Convention on Human Rights.

Be the first to comment on "Who is Alexei Navalny?"