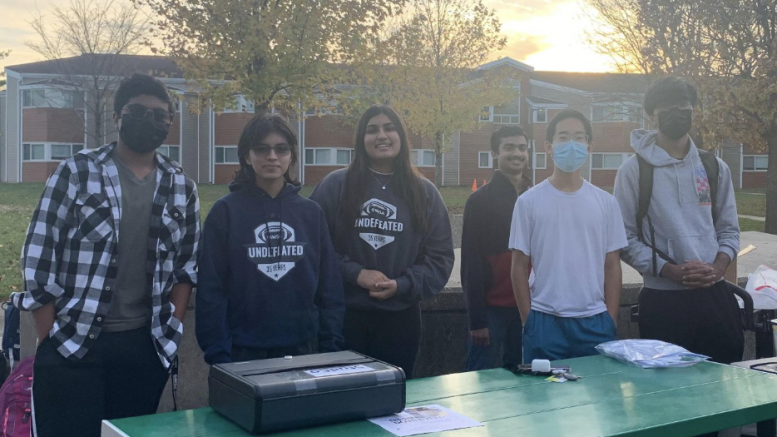 On November 3, IMSA’s Laboratory Advancement Body (LAB) Society took advantage of the warm temperatures by hosting a homemade Dippin’ Dots event. The event took place by the 05 Slabs, and their advisor, Dr. Kopff assisted in handling the liquid nitrogen, which was the key to the entire event.

The science behind making Dippin’ Dots relies on liquid nitrogen, a liquid form of nitrogen that is extremely cold. Its temperatures can get as chilly as −195.8° C, or −320.4° F. Although nitrogen is non-toxic, it’s vital that the liquid nitrogen is taken cautiously as it can cause frostbite from direct contact. Nonetheless, it is very useful for cooling when transporting frozen food products, conserving biological samples, and even making Dippin’ Dots!

At LAB Society’s event, they offered three ice cream flavors: vanilla, chocolate, and strawberry. These flavors were previously thawed so that attendees could fill their pipettes with any flavor.

Afterward, they were given a small amount of liquid nitrogen, which they ejected their melted ice cream into. When they finished, Dr. Kopff drained the frozen droplets out of the liquid nitrogen and into a bowl for consumption.

As an attendee, I enjoyed making my own chocolate Dippin’ Dots! While the droplets weren’t as round or small as the original, it was very fun to apply laboratory skills in a delicious experiment.

I wasn’t the only one satisfied with this event though. Co-president Kelly Cruz (‘23) described the event as having “an influx of students very eager to learn about science. LAB Society’s mission is “to generate interest and provide experience in laboratory research within the IMSA community by providing on- and off-campus opportunities and initiatives.” Overall, this event was a great kick-off that seemed to spark students’ interest in laboratory experience.

Megan Sia is a senior at IMSA from 1502. She is a staff writer for The Acronym. Usually, she can be found either hanging out with friends, watching Netflix, writing, sleeping, or doing homework.

Recovering From the Virtual Era: A Summary of IMSA Robotics’ Season