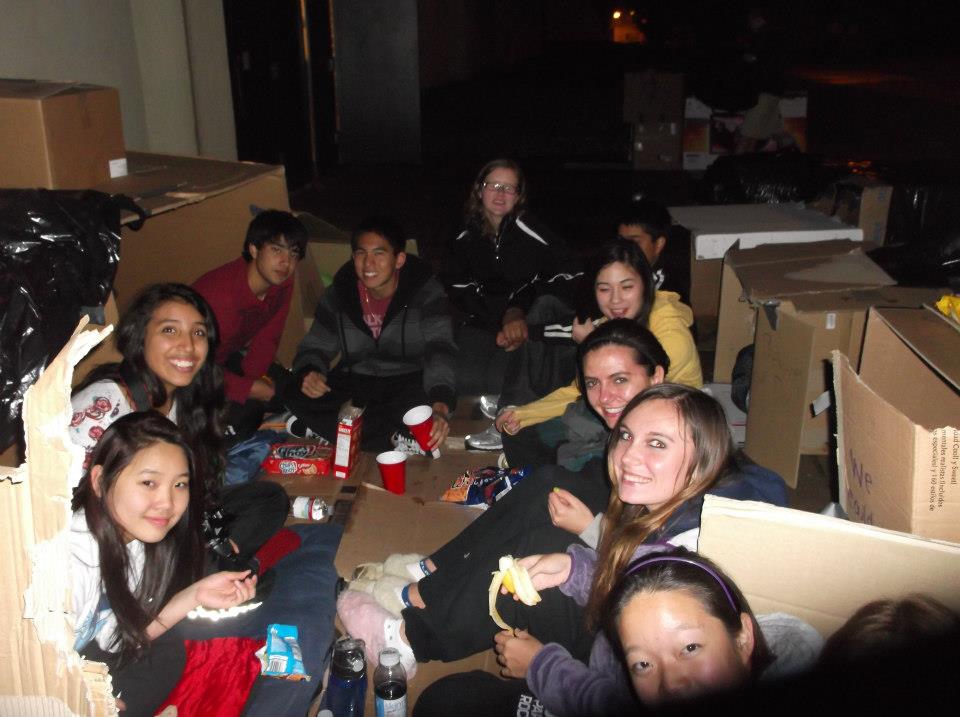 On Earth today, 95 million human beings are without a home. On October 9th, IMSA students joined this vast number for a single night. The 24 participants managed to raise $1,967.11 for donation to a local homeless shelter.

From 11:30 P.M. until 6:00 A.M., the nights’ participants were not cuddling up to the softest blankets with the most interesting books drinking the most satisfying cups of hot cocoa like their classmates in the halls.  Instead, these students were enduring the forty degree temperature, flimsy cardboard boxes, freezing rain, and solidarity.

The 24 students started off work early at 8:00 P.M. by transforming cardboard boxes into future homes in the main gym. The materials consisted of duct tape, large donated cardboard boxes, and markers to personalize each home. After signing out of 10-check, students filled their homes with protective gear such as sleeping bags, hats, gloves, and extra layers. Before venturing off into the cold and empty night, students discussed the true issues of homelessness. Past experiences and anecdotes relating to homelessness were shared and questions such as, “Why are you here tonight?” and “What does a home provide?” initiated many debates concerning  homelessness.

Michelle Kinama, class of 2014, stated that her reason for joining Habitat 4 Humanity and participating in the Tent City was “because my parents grew up with nothing. They have both come so far from their childhood experiences that I wanted to have an idea of what it was like for them to be freezing at night and trying to cuddle with the people next to you for warmth, because there were no heaters, jackets or blankets where they grew up.”

Kinama thoroughly explained her eternal gratitude for her possessions. She commented on the modern day complaints about little things such as not possessing new technology or having too much homework. There are people who are unaware of their next food source and concerned about repairing their homes, because if their homes cannot be repaired, they lose everything; unfortunately, such situations often times remain ignored.

To add to Kinama’s gratitude, Jack Michuda, class of 2013, thought that  “it was cool seeing everybody speak so candidly about their interactions with homelessness. The issue became so much more real to me as the night progressed. It definitely inspired me to more passionately pursue ways of helping the problem.”

Evan O’Brien, class of 2015, always felt as if he took advantage of things he had been gifted with, similar to Kinama’s feeling. O’Brien never imagined what life would be like for the homeless. Upon first glance, Tent City seemed like the perfect way to understand the problems confronting the homeless and the different means of life.

Furthermore, Anna Gupta, class of 2014, wanted “to help people like the homeless gentleman in my area. People call him ‘Crazy Ray’ because he was in the Vietnam War and was never the same since. Most people, save for my father and I, ignore Ray and avoid him if he tries to even strike up a conversation with them. I come from a community of people who seem to want to pretend that homelessness is not a huge problem. I, however, wanted to take a night to walk in Ray’s shoes and see how bad it can be not to have a roof over your head.”

Gupta’s box fell apart from the wind within the first hour of sleeping outside. Out of the whole night, she could only sleep for the hour her box was stable because of the cold.

Imagine the following scenario: Anna Gupta sitting alone under a soaked and collapsed box grasping a blanket for warmth for five straight hours. Her mind was filled with the concept of hot showers and a full night’s sleep. At that moment Gupta asked, “What if this situation were real?” There would not be the option of returning to a shower, bed, or even a dry place to sit and wait for the rain to pass.

Gupta realized, along with the rest of Tent City’s participants, that our personal petty problems do not “compare to those who work just to see tomorrow.”

Be the first to comment on "Project Tent City: Habitat 4 Humanity becomes homeless"