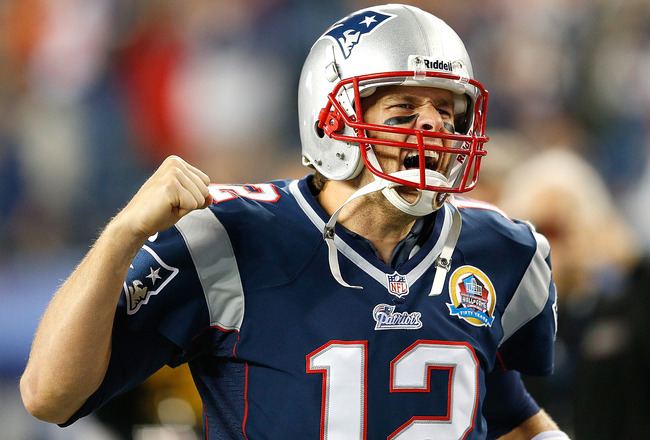 The Texans, Falcons, and 49ers have had a monopoly at the top during the illustrious history of our Power Rankings. For the first time, our top two does not include any of those teams. It’s a reflection of the state of the NFL right now. The Patriots, Broncos, and Packers are all peaking right now while the Texans and Falcons are backing into the playoffs. They have a couple weeks to right the ship before the playoffs but time is running short for them. On the other side of the spectrum, there is a lot of shuffling for a top five pick in the draft next year. Therefore, do not be surprised if some teams’ fans start rooting for their team to lose. Regardless of where you are, these next few weeks are critical. Enjoy! – Agnel (writes for the odd-ranked teams)

If you have not seen next week’s match-ups  help me pick my jaw off the ground and run.  Go look, Christmas is here early.  Let me just list a few good ones in the order I rank them and I understand if you get too excited to finish reading.  Steelers and Cowboys, answers a lot of playoff questions.  Texans, Colts.  Ravens and Broncos!  Falcons and Giants!  49ers and the Patriots: the clash of offense vs. defense, running vs passing! AND THE PACKERS vs. the BEARS?!  Do they want us to fail finals? – Mason (writes for the even-ranked teams)

Listen, it is very simple. There isn’t another team in the NFL that is playing as well as the Patriots are right now, but this falls in line with the usual trend of December dominance in New England. We will have to see if they cool off in the playoffs again.

I really would have liked for the Packers to lose and the Bears to win, but it didn’t happen.  The Bears are 10th now and the Packers are closing in on their NFC North title.

The rout they just went through could be a good thing for this team. After all, it isn’t like they have been playing inspired football for the past month or so anyway.

Eight straight wins?  The Broncos could be higher and they will be after they beat the slumping Ravens this week.

This weekend is their chance to prove that they still belong among the elite in the NFL. If they can go into Foxborough in December and win, they will probably become the favorites in the NFC.

This is what we were all waiting for.  This is the explanation for the Falcons having the best record and not being ranked first.  Newton had 116 rushing yards and yet, the Falcons’ leading rusher was Jacquizz Rodgers with 21 yards.

Same old Giants. One week their season is on the line, next week they are in the Super Bowl conversation.

I am not sure if I agree with ESPN saying they forced 8 turnovers or if the Cardinals gave them early Christmas presents.

One week after firing their offensive coordinator, they gave up a lead late against the Redskins. They are in trouble.

BEARS! STOP! The Vikings and Seahawks?  1-4 in the last five games? This is unbelievable with Jay Cutler healthy.

Their winning ways continue and now they even have dreams of winning the AFC South. The things you can do with a little Luck.

RG3 is tied for the highest passer rating?  Man this is a close Rookie of the Year race.  It is funny to see the Redskins and the Giants both ranked ahead of the Cowboys who are currently at the top of the division.

They still have a shot at the AFC Wild Card but their margin for error just became smaller.

They just lost to the Eagles to end their 8-game losing streak.  Goodbye playoff hopes.  Where does the Muscle Hamster rank for Rookie of the Year?

While dealing with tragedy, they managed to eke out a win against the Bengals and stay alive in the NFC East title hunt. Got to give it to them. They are staying alive.

With Big Ben, they lost to the Chargers.  This was a bad game, both quarterbacks barely over 50% completion, Matthews averaging 2.6 yards per carry, and Dwyer getting 32 yards. However, the result helps the Ravens.

Adrian Peterson would be a guarantee for MVP if Peyton Manning and Tom Brady didn’t exist.

The Rams are unbeaten in their division!!!!! That is too funny to think about with the Seahawks not being Arizona-awful and especially those two 49er games, one being a tie and the other ending on a late field goal in overtime.

The player suspensions from the bounty scandal were just overturned. Maybe now their defense will improve. Well, it’s nice to dream, isn’t it?

The Chargers have beaten Oakland, Tennessee, KC twice, and Pittsburgh.  The only good thing they have done all year is take the Ravens to overtime.

The Lions find themselves in a familiar spot: figuring out what player they are going to draft with their top ten pick in the next draft.

Generally mediocre, but not the worst.  The Raiders, Cardinals, Chiefs, and Jaguars have set the new standard for the worst, leaving all of Cleveland confused.

There’s no shame in losing to the 49ers, but questions about how this team is going to look next year are warranted.

Out of their eight losses, 5 were excusable against the Patriots twice, 49ers, Texans, and Colts, but not the Jets, Titans, or Rams.  I am just trying to help you get the image of the team. Also, their wins were against awful, awful teams: KC, Cleveland, Arizona, Miami, and Jacksonville.

Nick Foles finally had a coming out party. Enjoy it while it lasts, Nick, because Philadelphia is famous for chewing up and spitting out quarterbacks.

It was fun to beat up the Falcons this week, but they really should just tank for a draft position at this point.

They had the Colts hanging on for their playoff hopes going into halftime but then let it slip away. Just like their season.

Rex Ryan still thinks his team is winning the Super Bowl this year.

The Chad Henne hangover is beginning, so now Jacksonville can refocus itself on what is really important for them.

If Jamaal Charles averages almost ten yards a carry, I think you should feed him the ball, not forget about him in the second half like they do.

I would not be surprised to see Larry Fitzgerald leave this team next year. It is in complete disarray and they are quite honestly wasting his talent down there.

Three terrible teams left to play, but they should really just look to next year or anything to get their mind off this year

Be the first to comment on "NFL Power Rankings: Week 15"