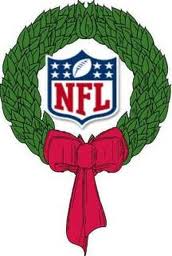 The season is drawing to a close! Well, the regular season at least. For our Power Rankings, they end pretty much the way they began: with me! What I mean is that our regular contributor, Mason Dearborn, was unable to assist with the rankings this week. That means that you are stuck with my own personal rankings and comments! Since it is Christmas week, I decided to do something a little bit different this week. Each team has its own Christmas gift from me. While they may be late, I can assure that every team in the NFL could do with the gifts I have given them. Anyway, enjoy this last week of football before the playoffs!

My late Christmas gift is…

A healthy Peyton Manning. This team will make it to the AFC Championship unless he becomes injured.

A healthy roster. I think they can easily beat the Falcons if all their pieces are in place.

Rob Gronkowski’s health. Fact is they probably would have won the Super Bowl last year with a healthy Rob Gronkowski.

Early leads. This team cannot play from behind.

A 49ers’ loss this weekend. That combined with a Seahawks’ win would give them the NFC West division title, meaning at least one home playoff game. You can count on the 12th man being at his full strength for that game.

A consistent defense. This team cannot give up 42 points to a rookie quarterback one week after giving up 28 points in less than a quarter and still be called a legit defense. They are probably the biggest threat to the Packers in the NFC, however.

A choke game from Tony Romo. On paper, the Cowboys are significantly better than the Redskins. RGIII is going to have to work his magic once again.

Cap room for both AJ Green and Andy Dalton in two years when their contracts are both done.

An offensive line that gives Jay Cutler more than two seconds to get rid of the ball.

Chuck Pagano. In all seriousness, it is good to have him back on the sidelines this week.

A blowout win against the Redskins this weekend. Tony Romo is due.

An 8-8 season. This team is too good to have a losing season.

A first rate wide receiver. With one, they would definitely be a force in the NFC West next year.

Something resembling a defense.

Proper player scouting that will yield productive players with smaller contracts. This year’s team was supposed to be stacked on defense. I’m looking at you, Mario Williams and Mark Anderson.

One more year of experience. They are young and full of potential. We saw flashes of what they are capable of this year.

See my gift to the Browns.

A quarterback that can throw the ball to Larry Fitzgerald properly and consistently.

A year without drama. Ha, like that’s going to happen.

A healthy Matt Cassel with a decent offensive line and receivers. I still believe he can get the job done for them.

Be the first to comment on "NFL Power Rankings: Week 17"