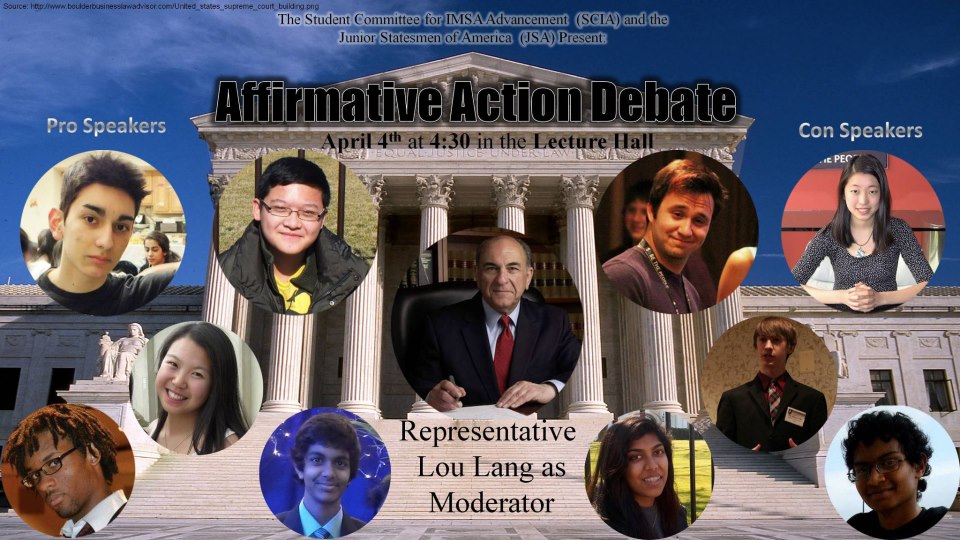 On Thursday, the Lecture Hall became the grounds for a debate: “War of the Words on Affirmative Action.” Hosted by Student Committee for IMSA Advancement (SCIA) and Junior Statesmen of America (JSA), the event featured a traditional parliamentary debate style complete with moderators and pro/con speakers. While the invited moderator, Illinois state representative Lou Lang, was unable to attend, IMSA’s president Dr. McGee gladly stepped in to fill the role alongside experienced JSA time-keeper Christine Liu.

Ten of IMSA’s best orators presented their cases on affirmative action as a factor in college admissions. Pro speakers pushed for the fact that affirmative action helped to recycle the pool of candidates. Without the policy in place, they contended, racially underrepresented and economically underprivileged students would feel much less inclined to apply to colleges due to expenses. The con team first took a more historical approach. While agreeing that the policy was helpful in the past when there existed little diversity in higher education, they argued that today affirmative action is outdated if not even harmful to the education system. Opening con speaker Summer Wu (’13) brought up statistics from Harvard University which showed that a majority of its black students came from foreign countries, thus undermining the purpose of affirmative action in alleviating marginalization of race in America.

Both pro and con teams discussed what it meant for a student to “deserve” college. As pro speaker Christopher Norris (’13) asserted, college admissions offices did not just consider race or socioeconomic background. After all, he stated, “causation does not equal correlation, and vice versa… The students earned it.” Similarly, in his closing con speech, Vinesh Kannan (’15) urged to the audience to realize that “college is a resource” that should be granted to students with the best fit or to those most qualified.

With the closing statement of the final speaker, Dr. McGee exclaimed “Usually at this time of the day, I’m dead tired, but I’m pumped up!” With a mischievous smile on his face, he bantered with Christine to take a vote by voice with the gavel as a noise meter. A final vote by hand definitively named the “CON” side as having won majority vote.

IMSA, what are your thoughts on affirmative action?