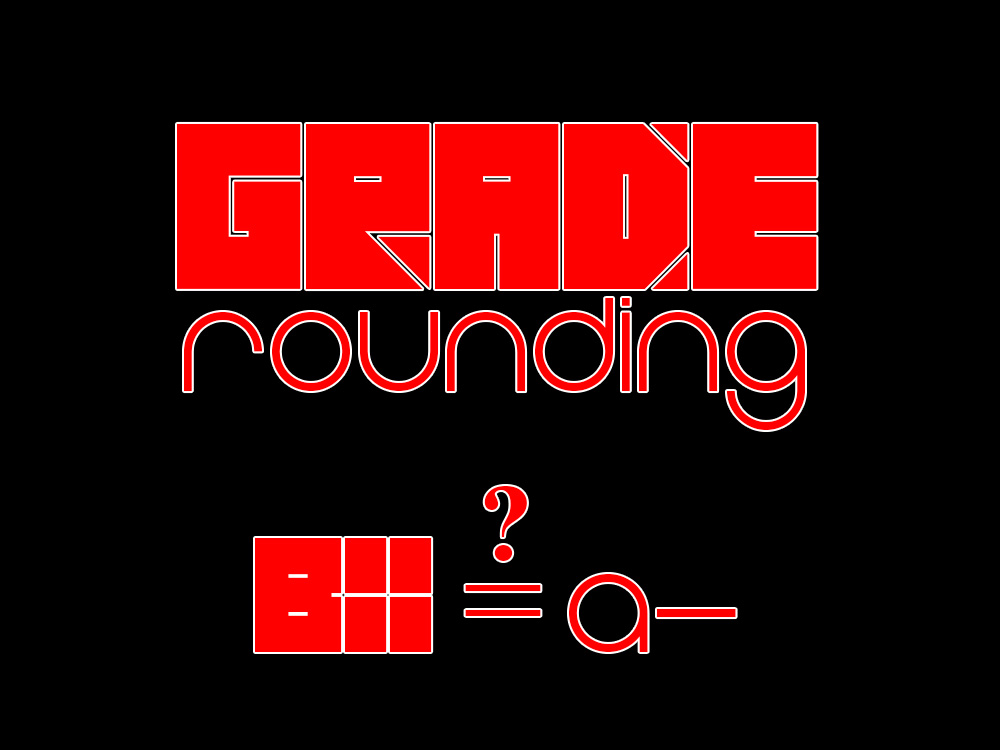 There is one thing that every IMSA student dreads when opening up Powerschool near the end of the semester: a grade that ends in a 9%. 89%, 79%, 69%. To students, those grades are like jumping over a wide fissure. Some safely reach the other side; others fall to their academic deaths mere inches away from the Promised Land. Overdramatic analogy? Maybe, but the 89% and even the 90% carry so much uncertainty with them that having an 85% would almost be preferable. The same applies to a student on the border between a C and a B.

Across this campus, complaints about borderline grades and teachers’ rounding policies creep into students’ conversations as finals approach.

But what exactly is the rounding policy of teachers? For a subject that comes up so often, there doesn’t seem to be much clarity regarding the process. The reason most students do not have a full understanding of why some teachers round and other teachers don’t is that there is no administrative policy regarding this practice.

Usually this conflict occurs when a student is within .5% of the grade cutoff. Since this line is not set in stone by administration, there is a discrepancy between what is considered worthy or eligible for rounding. The battle between the students and teachers on grades stems from this discrepancy.

The students generally advocate for a more lenient rounding policy, which is to be expected. From their perspective, the student put in the effort and missed out on getting a higher grade by a couple of points on any given assignment. After all, they argue, what is the difference between an 89.5% and 90%?

For seniors, the importance of these borderline grades is amplified. That .5%, especially if the student in question has multiple borderline grades, can significantly impact a student’s GPA. Considering that this single metric carries so much weight in the college admissions process, that difference in GPA could affect college and scholarship decisions.

Perspectives of teachers, on the other hand, differ based on who you ask.

Some take the hardline stance. As IMSA history teacher Dr. Lee Eysturlid says, “I don’t do any rounding. I just don’t. I don’t need to.”

Teachers like Dr. Eysturlid believe that the grading system and cutoffs are there for a reason. If a teacher rounds, he or she is essentially taking away the meaning behind those cutoffs.

Most teachers, however, leave the decision to round a student’s grade up to their specific discretion. IMSA science teacher Dr. Donald Dosch is one of these teachers. He said, “I use [the cutoffs] as guidance, but if I think there is a student that is 89, 88 and has shown me significant change in performance and ability, I have the freedom and I do exercise it to boost them up to the A range.”

“It is based on the individual, in that situation,” he continues. “So I am looking over the entire semester’s worth of work.”

Dr. Leah Kind, an IMSA English teacher, however, does not buy into the idea that teachers can make a fair determination about whether a student gets rounded up. “If I decided that oh that student with an 89.5, you know, they wore a really nice shirt the whole semester, I think I’ll just give them the A minus. Why wouldn’t I go and do that for every other .5 grade?” she explains. “So, I use PowerSchool as it is set up for fairness across the board for my students.”

Despite their different rounding policies, Dr. Dosch agrees with Dr. Kind to an extent. He says, “I try very hard to be fair. I cannot leave myself open for capricious grading because ultimately, I think the grade must mean something.”

Interestingly, in each conversation, teachers returned to the same issue: what is the meaning behind these grades? Are the cutoffs that our educational system has in place effective in determining academic achievement?

Once again, opinion among teachers was divided on this issue. Dr. Eysturlid and Dr. Kind both believe in the system the way it is. They believe this to be true even in subjects that don’t have a numerical method of determine success versus failure (i.e. classes in which written assignments are far more prevalent).

Dr. Eysturlid bluntly said, “I don’t have a problem with [numerical grading]. I’m called on to be subjective and so if I translate subjective into numbers it works out in the end.”

However, Dr. Dosch seemed less than pleased with the grading system. He believes that it has inherent flaws. Because the cutoffs are arbitrary, attempting to judge achievement based of them doesn’t make sense to him. “I never have found a hard and fast line where it’s satisfying.”

He mentioned that teacher mistakes could also lead to issues with grading. “I wish I could do this job so well that I could be certain in this determination. But I can’t. I just can’t.”

He went on to say, “It’s an imperfect situation, so why be hard and fast?”

A member of the math department, who preferred not to be quoted in this article, said that the grading system limits what teachers can do because they constantly have to worry about the grades their students receive. Furthermore, students become so obsessed with earning a grade that they do not effectively learn the material.

This gets at the core of the rounding issue because in the end, if the cutoffs are arbitrary, are they valid? What is the difference between a student who received an 89.5% versus a student who received a 90%? The 90-80-70 cutoffs seem to be born out of nothing but pure convenience. They are nice numbers that make “sense”. As a society, we have placed artificial levels of achievement that correspond to those ranges.

Nonetheless, this system has proven to be quite useful. Organizations such as universities and scholarship committees can get a fairly good picture of a student’s academic achievement by looking at his or her GPA. Therefore, its convenience allows most people to overlook its shortcomings.

The problem compounds when one attempts to find solutions to these problems. One option is a purely qualitative assessment of a student’s work over the course of a semester. But this method raises other questions such as how does one compare students from different schools and how much does teacher bias play into it.

What started out as a simple investigation into the rounding policies of different teachers, turned into a full critique of the educational system. Through the process of these interviews, one thing became abundantly clear: as long as the grading system remains constant, the battle between the student body and the faculty at the end of the semester will continue. And, like it or not, the final decision on whether or not a student gets rounded will be up to the teacher.

Hopefully sometime in the not too distant future, someone will figure out a solution to all these problems. Until then, the only real solution is to work hard and avoid being on the borderline. And if you find yourself at that dreaded 89.5% at the end of the semester, good luck.

May the odds be ever in your favor!

Be the first to comment on "The Grade Canyon: Rounding Policies of IMSA Teachers"