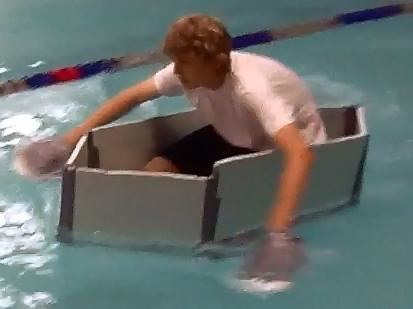 Last Friday, students in IMSA’s Engineering course raced homemade boats in daunting trials of both speed and endurance. The contest is pretty straightforward: groups of three or four students are given a sheet of 4 ft x 8 ft Styrofoam and a single roll of duct tape to make a boat. Each boat is designed to carry one intrepid “skipper” who is the sole navigator of the craft and tasked to paddle it across the treacherous waters of IMSA’s swimming pool. The test of speed determines which boat can finish a lap (50 yards) in the shortest amount of time while endurance measures which boat can complete the most laps in 5 minutes. Many boats could not fare against the callous surf and from cracked hulls and chipped Styrofoam, failing to complete the races. However, the boats captained by Jess Monigal (’14) and Jack Gibbons (’14) were the winners of the trials in their respective class periods, earning the respect of Poseidon himself.

A relatively new course, Engineering provides students the opportunity to focus on applying the science and math skills that they have developed in their other classes. For this particular assignment, students used their new found knowledge of buoyancy and design to construct the most successful boats. The class also boasts other shorter projects that work with airplanes, wind turbines, hydraulics, LEGO robots, and 3D printing. Additionally, as a final, long-term assignment that encompasses an entire quarter, students propose individualized projects that allow them to pursue their interests in a fashion reminiscent of SIR, IMSA’s Student Inquiry Research program. A couple of notable projects from past years include a smartphone-controlled door lock and a robotic arm designed to help the physically disabled. The latter was inspired by IMSA’s previous principal, Dr. Eric McLaren, who was diagnosed with amyotrophic lateral sclerosis (known colloquially as Lou Gehrig’s disease) in 2010.

Engineering allows students to apply their ingenuity and scientific knowledge across a wide range of projects. Being oriented more to exploring and tinkering with technology, the class exemplifies the focus of the Illinois Math and Science Academy. And personally, I’m excited to see how Engineering  develops and makes way for similar courses to come. One Engineering student expressed his sentiments on the course, saying, “Engineering is really fun. It has a lot of hands-on opportunities that provide a great experience that other classes really can’t match.”

Boeing 777’s Engine Failure: The Latest in a Disastrous Series of Events