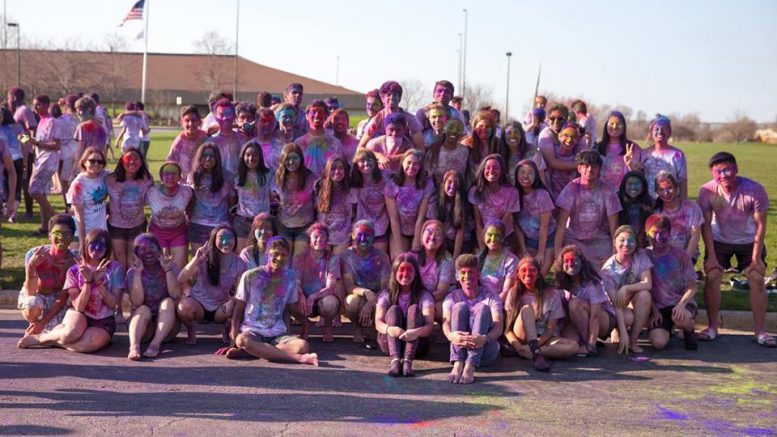 The junior class after a successful Holi (Source: ISP)

Holi Hai, IMSA! On April 24th, ISA brought Holi to IMSA campus to welcome spring and celebrate the Hindu festival of colors. Although IMSA uses the holiday each year as a way to come together and relieve stress, the true Holi festival has religious and cultural connotations that date back thousands of years. The actual 2018 holiday began on Thursday, March 1st and ended on Friday, March 2nd.

In the Hindu religion, which follows the Lunar calendar, Holi is celebrated yearly on the Phalguna full-moon. The festival is characterized by throwing colored powder and water at other people, and the entire social order falls away. The roots of Holi can be traced back to a legend about the god Vishnu. Although the festival has religious origins, prayer has never been associated with the celebration. Rather, the celebration culminates with friends and families in clean clothing, and people exchange sweets and words of forgiveness.

Throughout India, Nepal, and other countries with large Hindu populations, people celebrate the festival of Holi in the streets by throwing colored powder and spraying each other with colored water. The festival is accompanied by bhang (and alcoholic drinks in some places) and delicacies. Everyone can expect to end the day covered in powder and soaked in water. In the present day, Holi traditions have been adopted by western culture, and it can be seen in events such as color run 5Ks.

At IMSA, all students are invited to play and take part in the exciting festival. This year, ISA sold t-shirts for five dollars, and the t-shirts served as vouchers for pani puri and Holi powder. SoCC also sold traditional mango lassis for $5. The few minutes spent running around Yare and throwing color were stress relieving and enjoyable. Photos, including professional shots from ISP, followed the celebration. After the festivities ended, students headed back to their halls to shower off the powder, leaving their bathrooms covered in colorful stains. Whether it was someone’s first Holi or fifteenth, the event was filled with smiles and indecipherable faces.

Holi is one of ISA’s two major events, and each year, it serves as a physical representation of the end of the ISA senior board’s time on the club. This year’s ISA president Abhiudaya Bhalla (’18) can fondly look back on his past years on board.

“It’s been an honor serving the Indian Student Association and I would do it for the rest of my life,” he said. “I’m so grateful that everything worked out this year and that I got to end the year on a colorful note. I pass down my legacy to Teja and Sibil, and I can’t wait to see what the future of ISA looks like when I come back.”

Next year, Holi is set to return in April, bringing color and spring back to IMSA’s campus. The tradition is long-standing, and it doesn’t show signs of fading away in future years.

Decorating Your Dorm for the Holidays